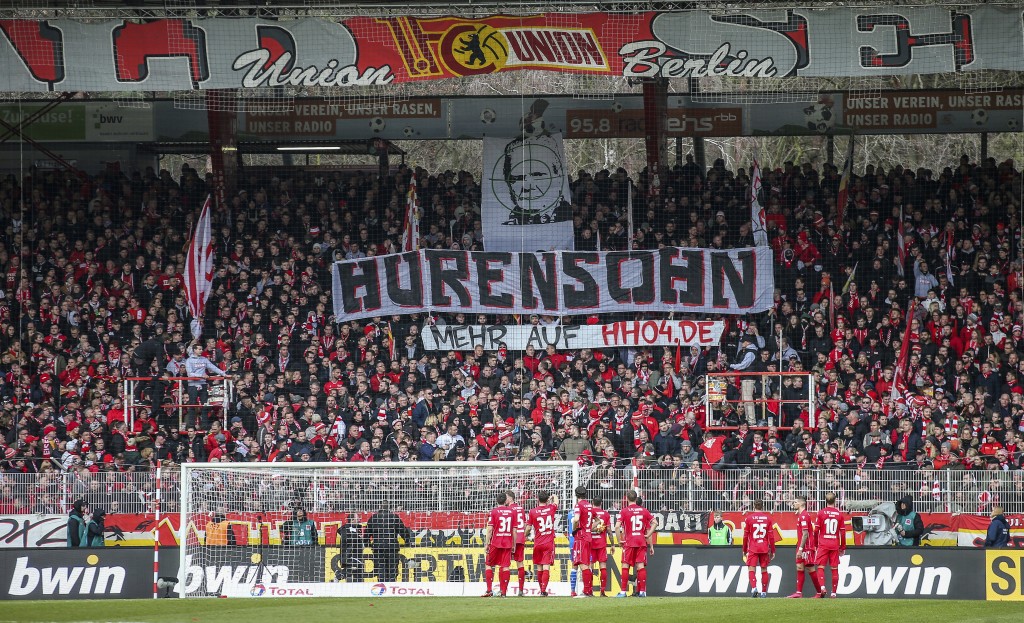 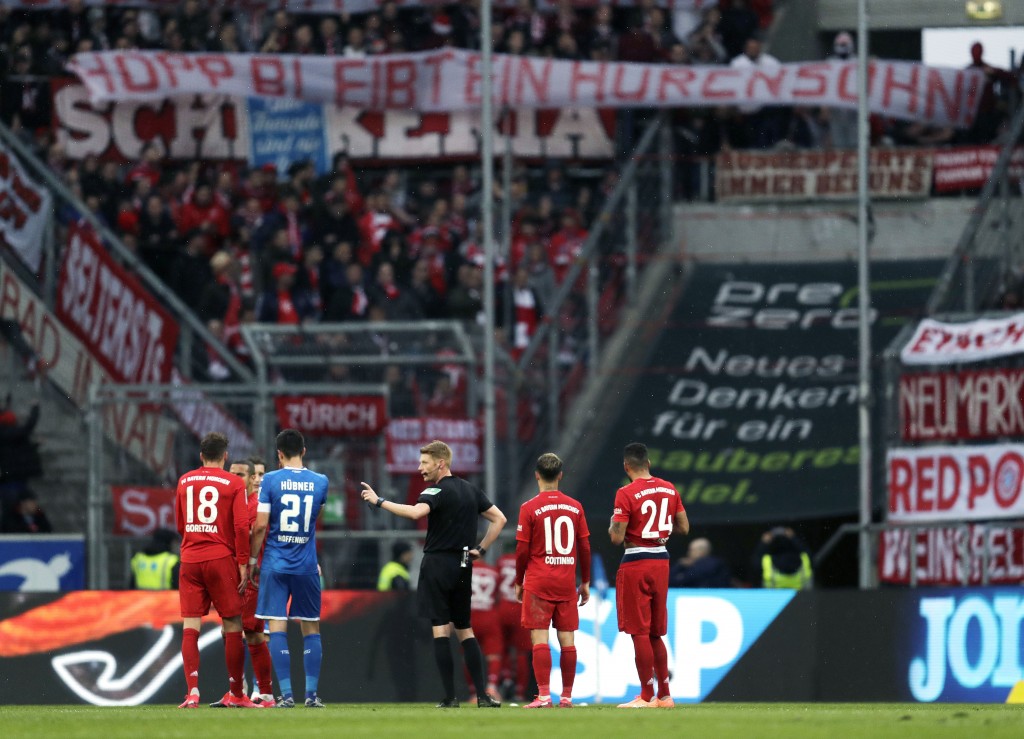 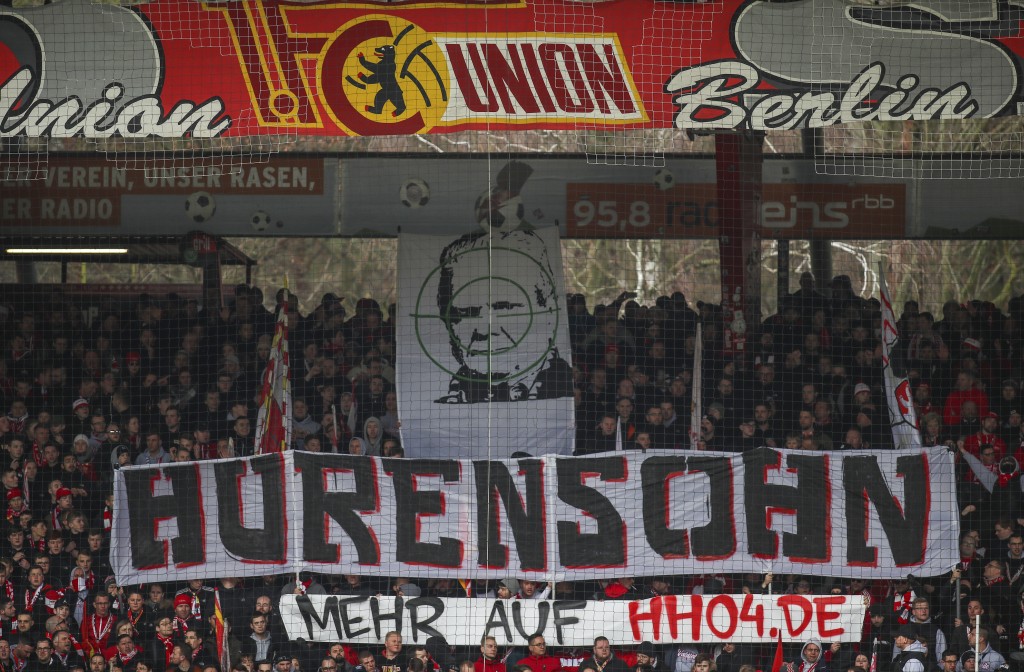 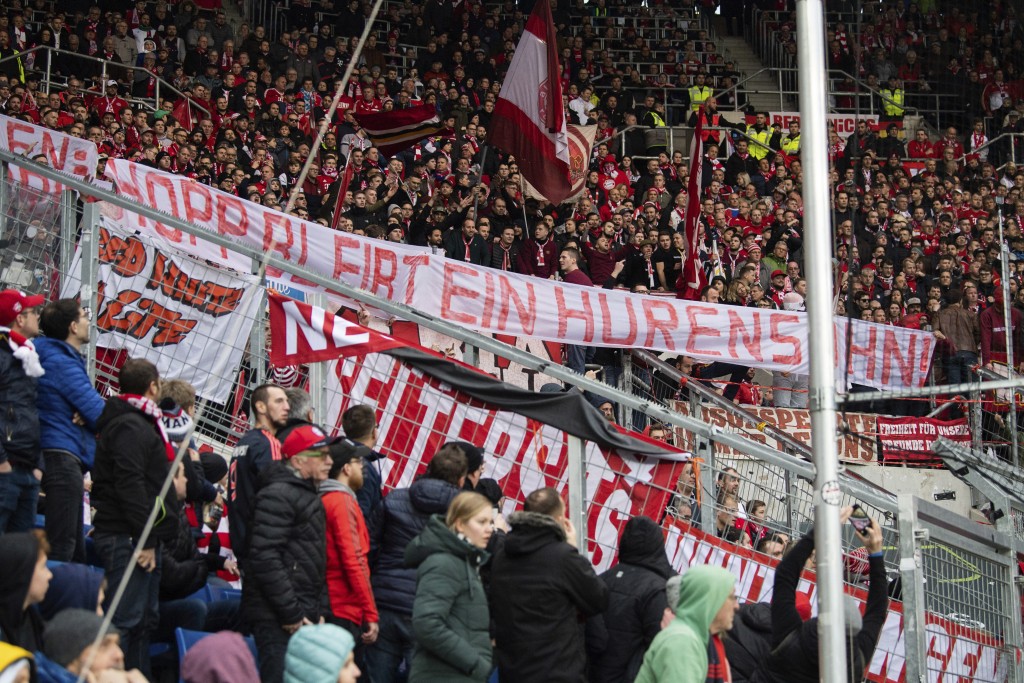 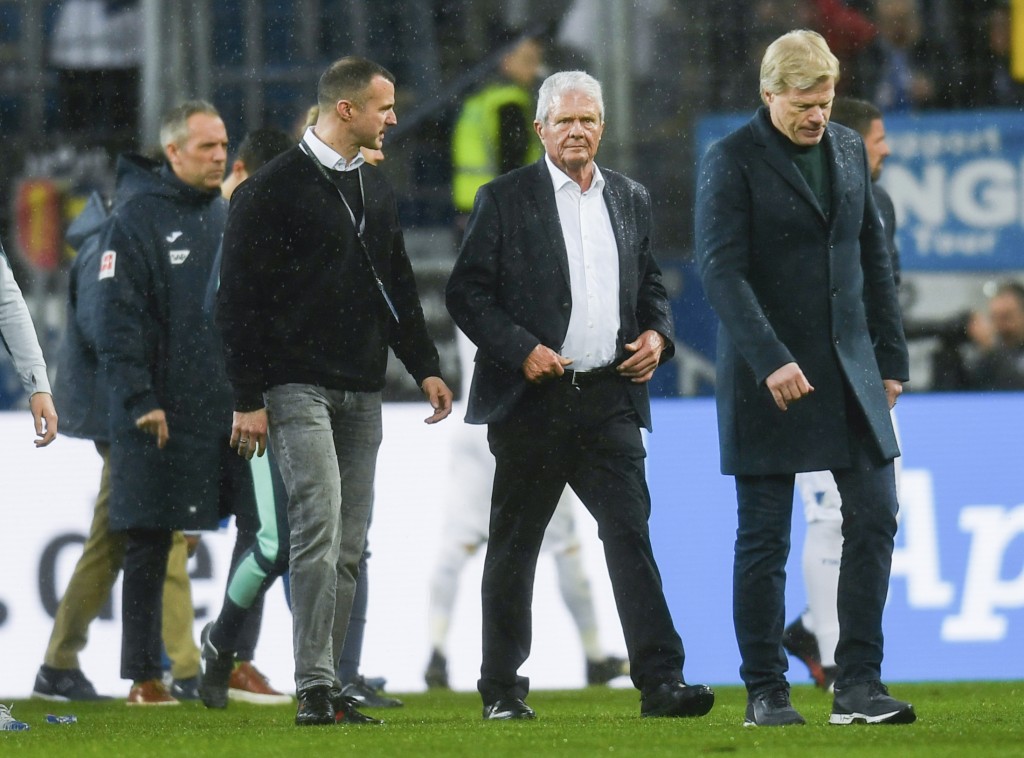 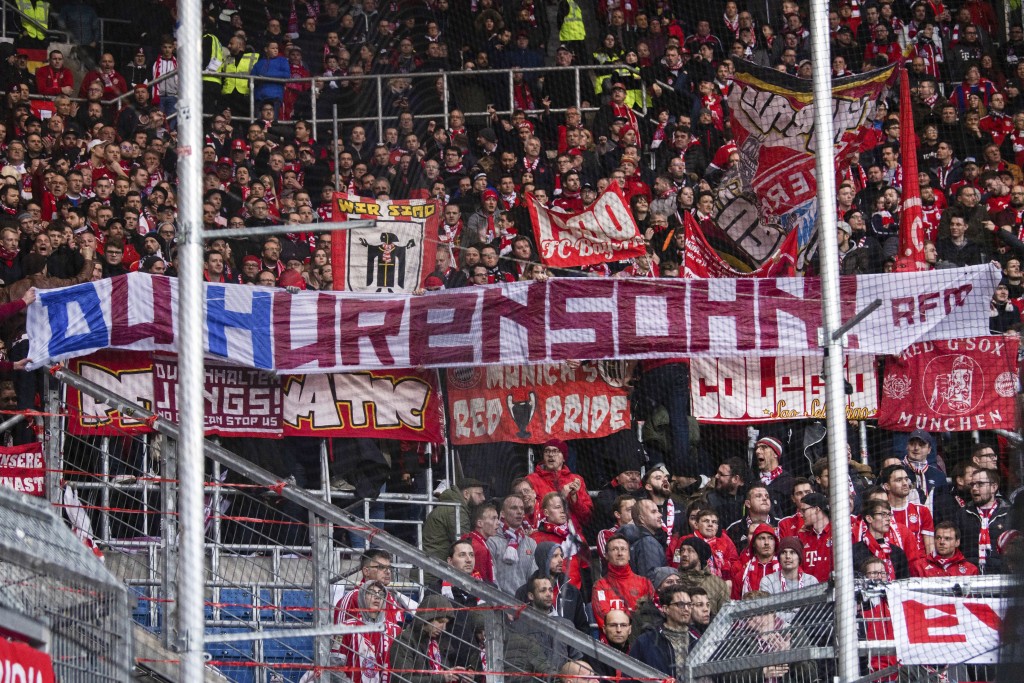 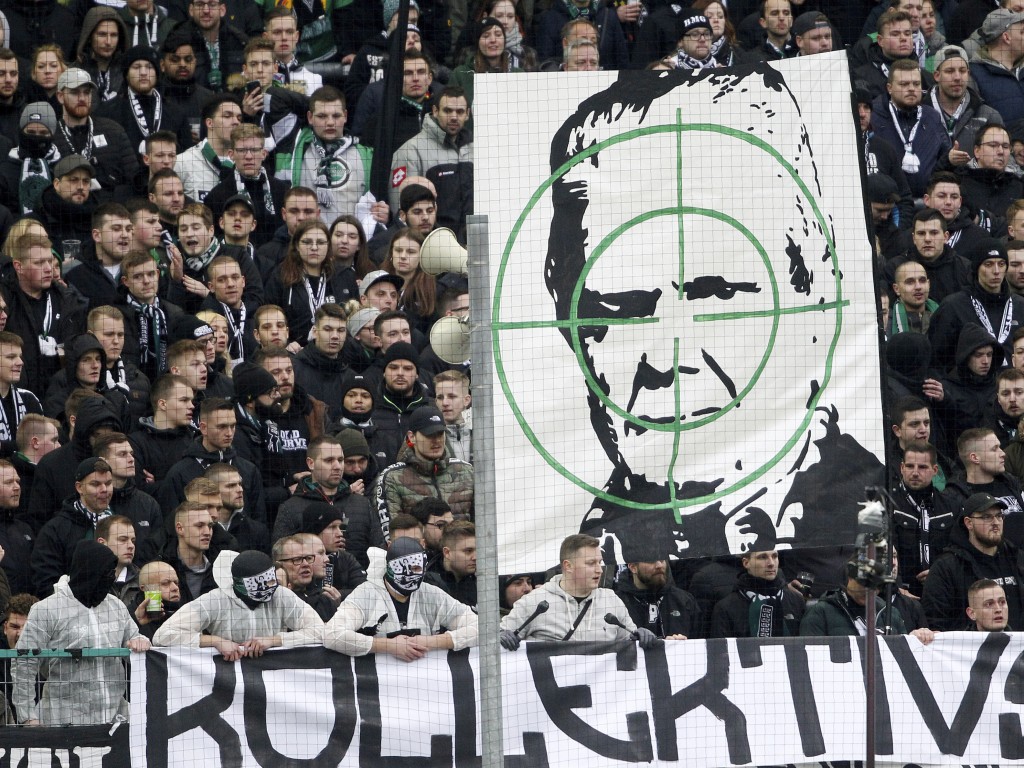 BERLIN (AP) — The German soccer federation’s power struggle with fans escalated dramatically over the weekend when Bundesliga games were interrupted by protests with the threat of being called off.

Fans at several games unfurled banners with criticism of the federation and crude messages for Hoffenheim backer Dietmar Hopp, leading to stadium announcements against the abuse and referees leading teams off the field.

Bayern was already leading 6-0 but no more soccer was played after some of the traveling support had insulted Hopp.

“It’s the hateful face of soccer,” said Rummenigge, one among a host of club officials condemning the abuse.

There were hold-ups, too, at Dortmund’s game against Freiburg, where both sets of supporters displayed banners criticizing the federation, and again on Sunday when Union Berlin fans unfurled banners first accusing the federation of taking “two steps back,” then insulting Hopp while displaying his face behind a cross-hairs. There were similar insults from Borussia Mönchengladbach fans the previous weekend.

Referees were instructed to use FIFA’s three-step procedure for dealing with the abuse, a measure originally developed for combating racism. It almost led to the abandonment of the games in Berlin and Hoffenheim after referees went to Step 2.

The protests were sparked by the federation’s decision on Feb. 21 to ban all Dortmund fans from Hoffenheim’s stadium for two years because of their repeated chants against Hopp.

The 79-year-old billionaire has been a target since Hoffenheim was promoted to the Bundesliga in 2008. Previously in the fifth division, Hoffenheim’s ascent through the leagues was made possible thanks to steep investment from its former youth player, a co-founder of software giant SAP.

Rival fans resent Hoffenheim’s ascent at the expense of another team without a billionaire backer. They also object to Hopp’s opposition to the league’s 50-plus-1 rule, which protects clubs from takeovers by a majority stakeholder. Hopp was granted an exception in 2015 because of his long support of the club.

Hoffenheim has hit back against the abuse. At least 33 Dortmund fans were identified and banned from its stadium in 2018 because of abuse leveled at Hopp the previous season. A club employee also used a high-frequency sound system to drown out Dortmund chants in 2011.

The latest league-wide protests are about more than just Hopp, however. Fans have pointedly accused the federation of reneging on in its 2017 promise to end the “collective punishment” for supporters for misdemeanors after making its sanction against every Dortmund fan.

There are other gripes, too. Monday night games have been scrapped from next season because of repeated fan protests. There has been an ongoing struggle over pyrotechnics at games, banned by the federation, but considered a vital part of game-day experience by many supporters.

Bayern fans have been critical about their own club’s sponsorship links to Qatar, and have campaigned, like others, against issues like homophobia, sexism, anti-Semitism and racism.

The Bayern fans who insulted Hopp at Hoffenheim on Saturday issued a statement the following day.

“It is hardly surprising that the (federation) allows itself be influenced by a patron and breaks its promises to refrain from collective penalties,” fan group Südkurve München wrote on their website. “What is significantly more frightening is the accomplishment of Hopp’s 10-year-old demand for criticism of himself and ‘his’ club to be equated with racial discrimination and punished accordingly. On one hand this leads to the trivialization and ridicule of actual racial abuse and violence, and on the other it illustrates the blatant failure of the federation after such incidents.”

The federation’s strong response to the insults against Hopp has left it open to accusations of hypocrisy. Hertha Berlin player Jordan Torunarigha was subjected to racist abuse during a German Cup game at Schalke on Feb. 4, but the monkey chants went unnoticed by the referee and the defender was sent off in extra time for a reaction after getting increasingly upset.

Others pointed to the federation’s treatment of billionaire Schalke chairman Clemens Tönnies, who faced no sanction from the league after making racist comments about Africans at a public meeting last August.

Schalke said Sunday that its team would immediately leave the field if there were any defamatory chants made or banners shown during Bayern’s German Cup visit on Tuesday, or Hoffenheim’s visit in the league on Saturday.

BAG, an organization representing fans, criticized the federation for not using the same three-point measures for “any incident of racism, sexism or the like,” and it warned of a “dead end” in the relationship between the federation and fans.

Berlin’s Der Tagesspiegel newspaper referred to Rummenigge’s “hateful face of soccer” comment, saying that it would be more appropriate when applied to workers building World Cup stadiums and dying in Qatar, or to soccer officials hiding away millions in taxes.

On a weekend when Bayern won 6-0 and opened a three-point lead in the Bundesliga, no one was talking about the soccer played.