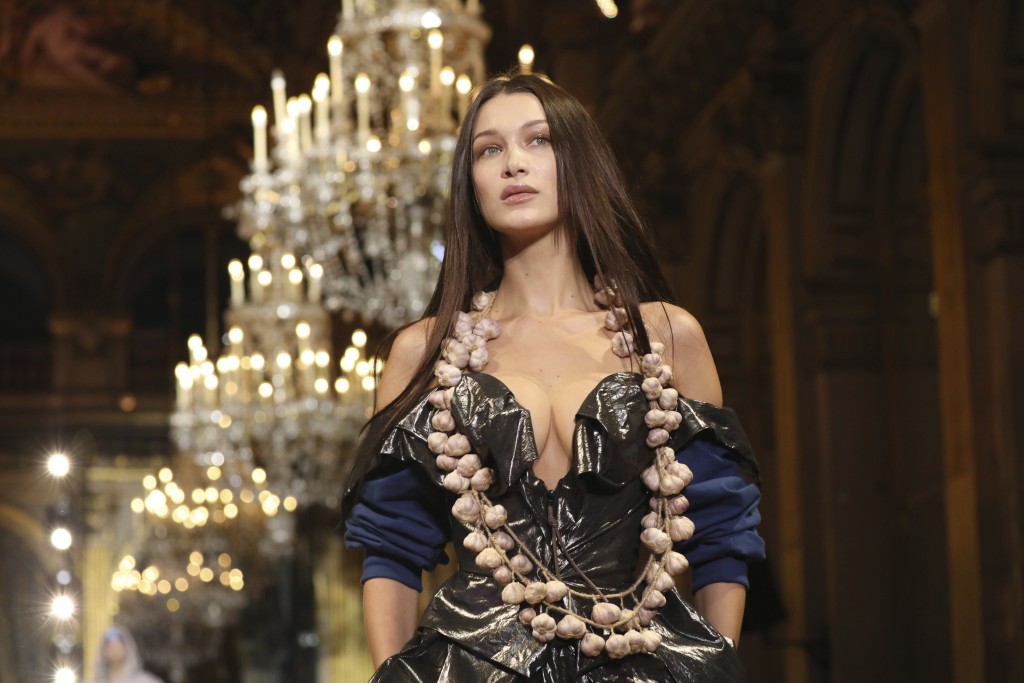 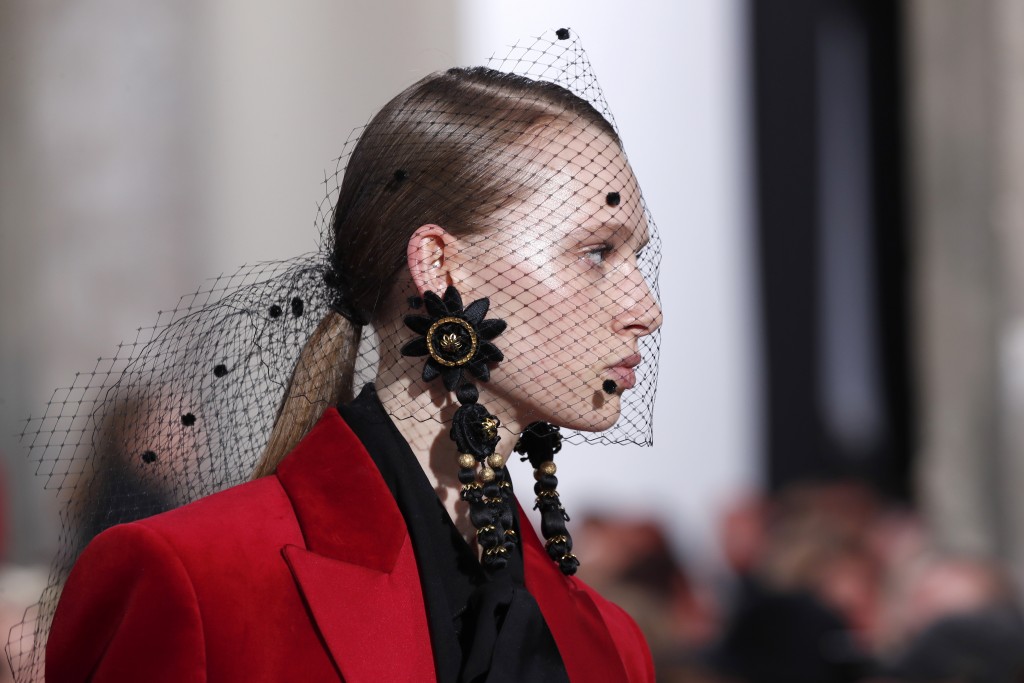 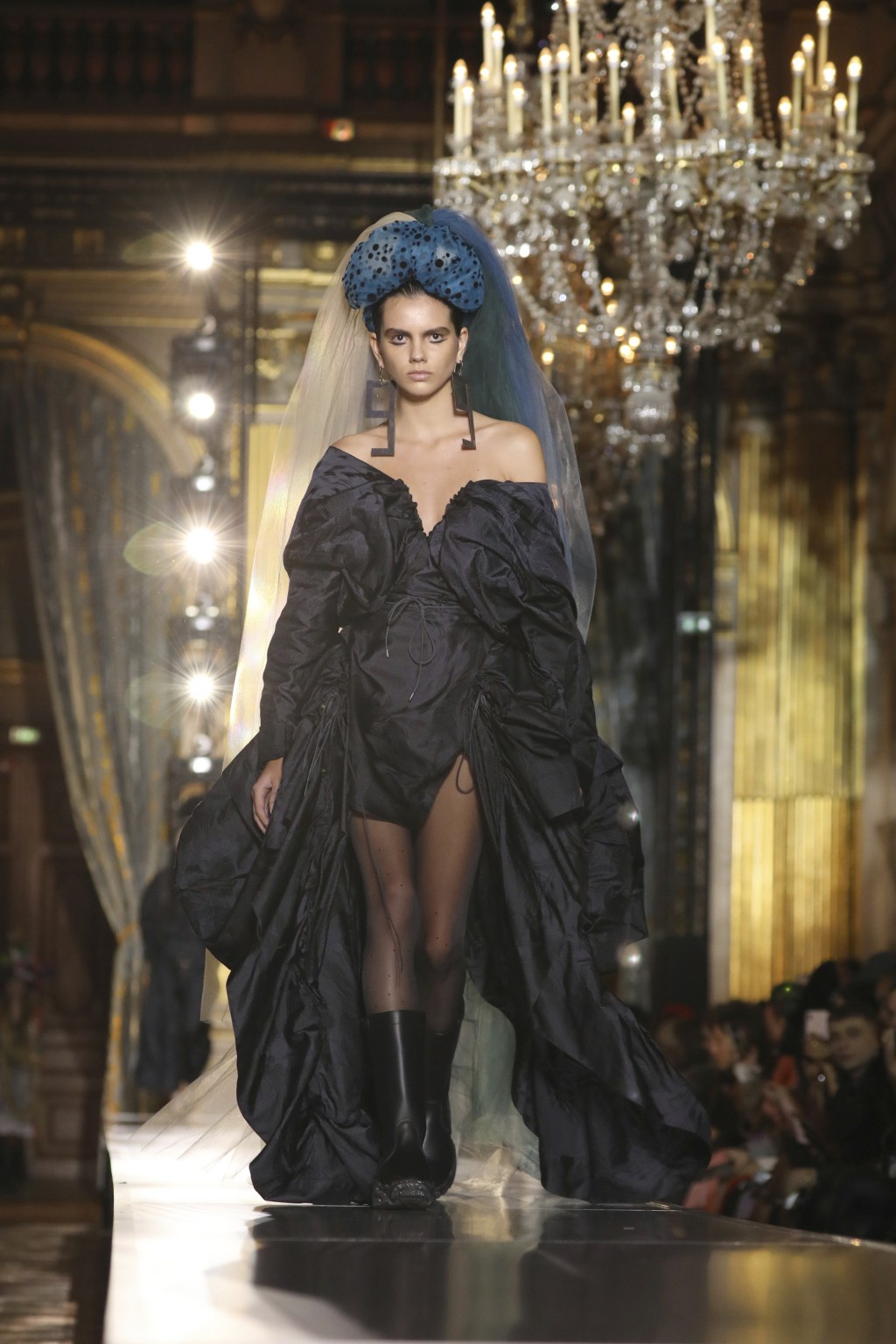 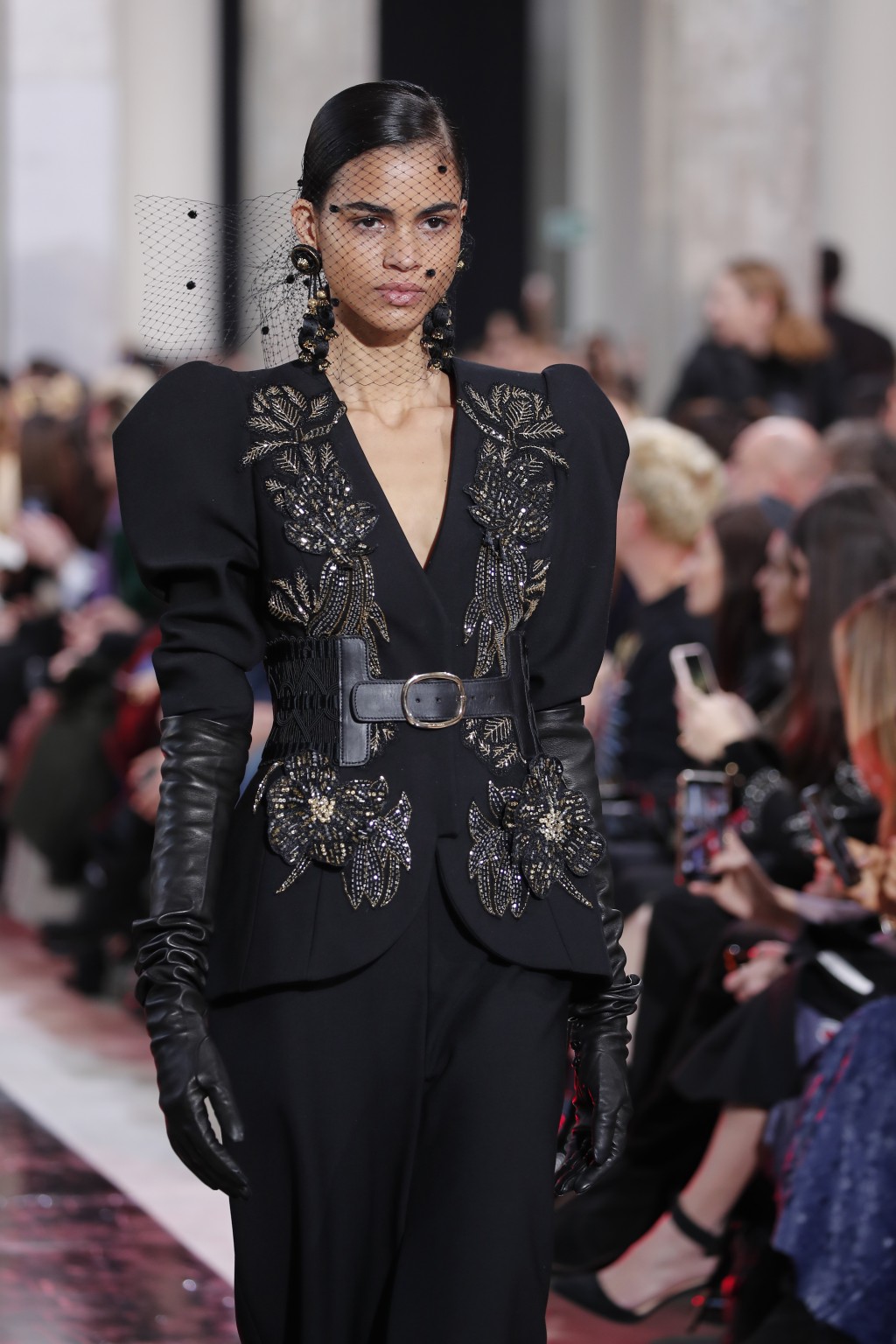 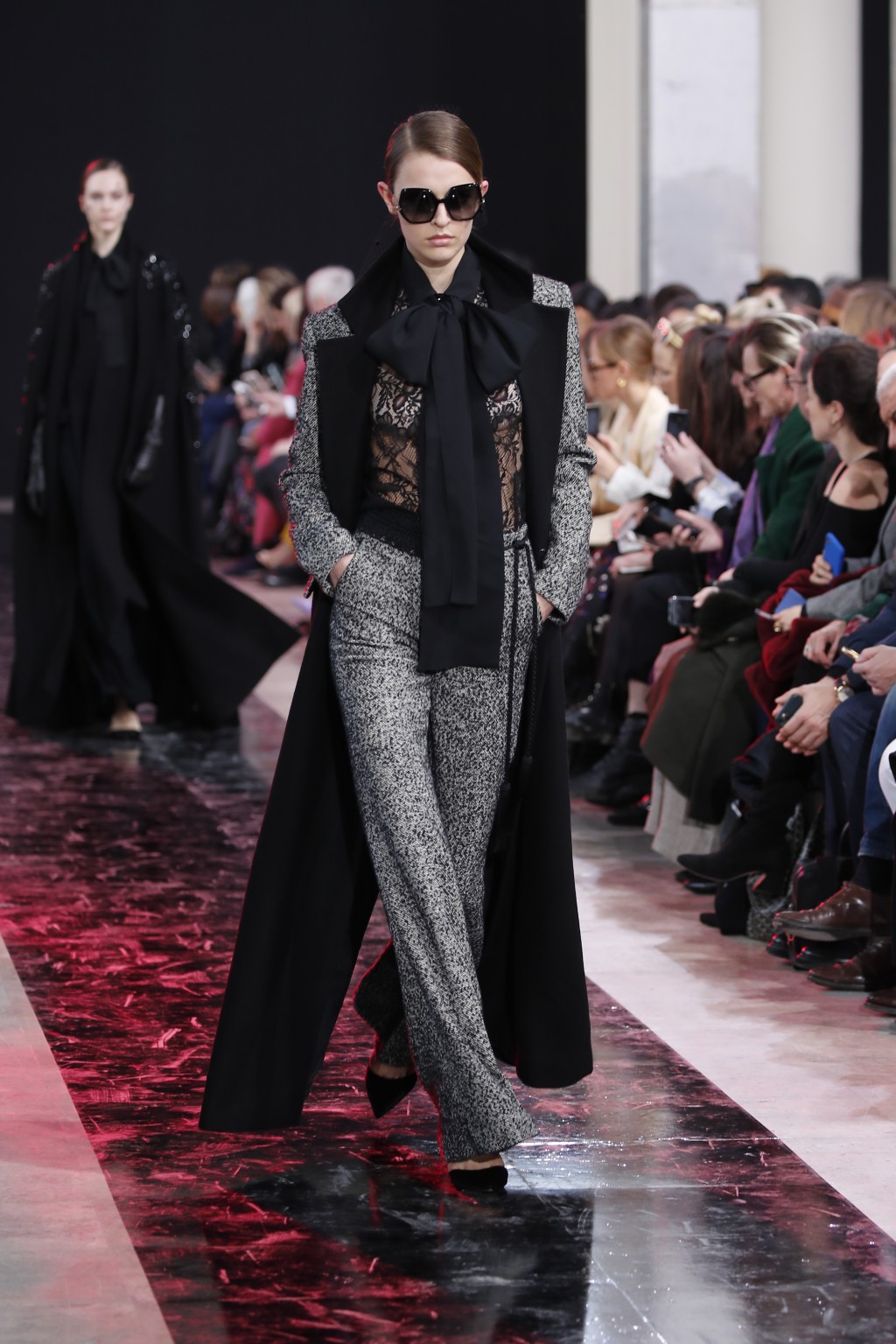 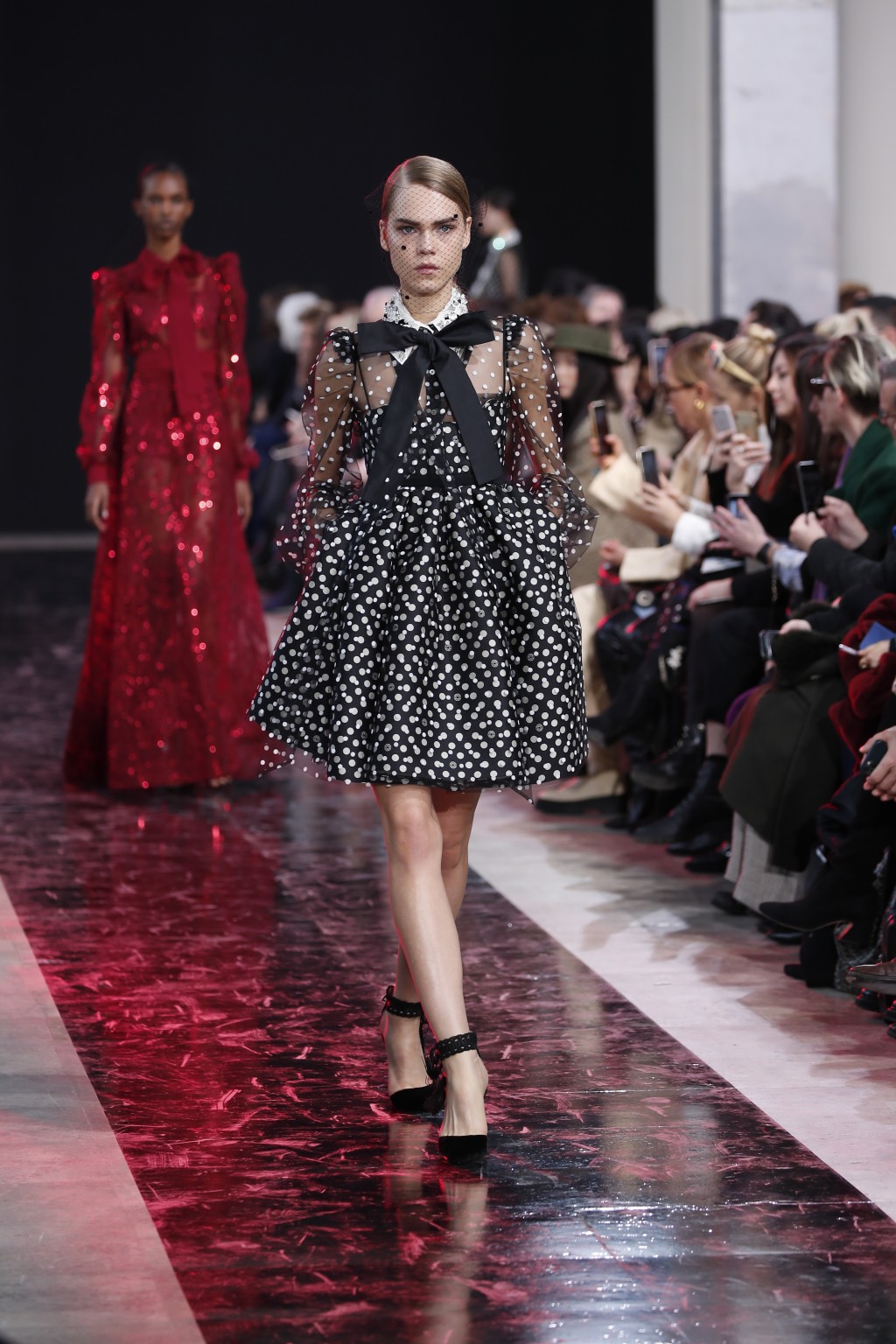 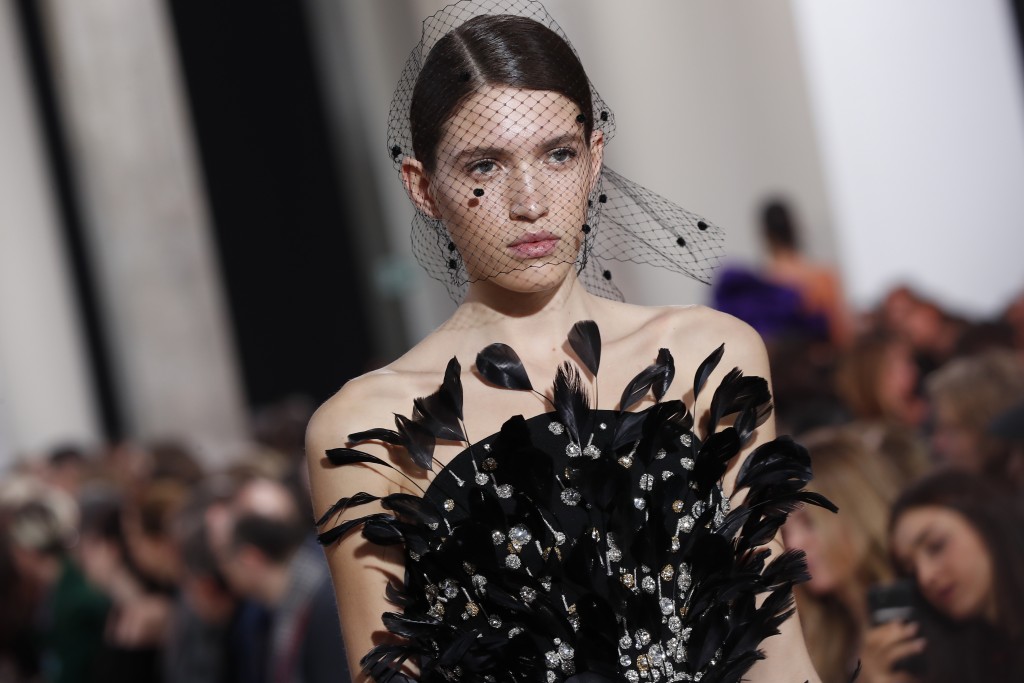 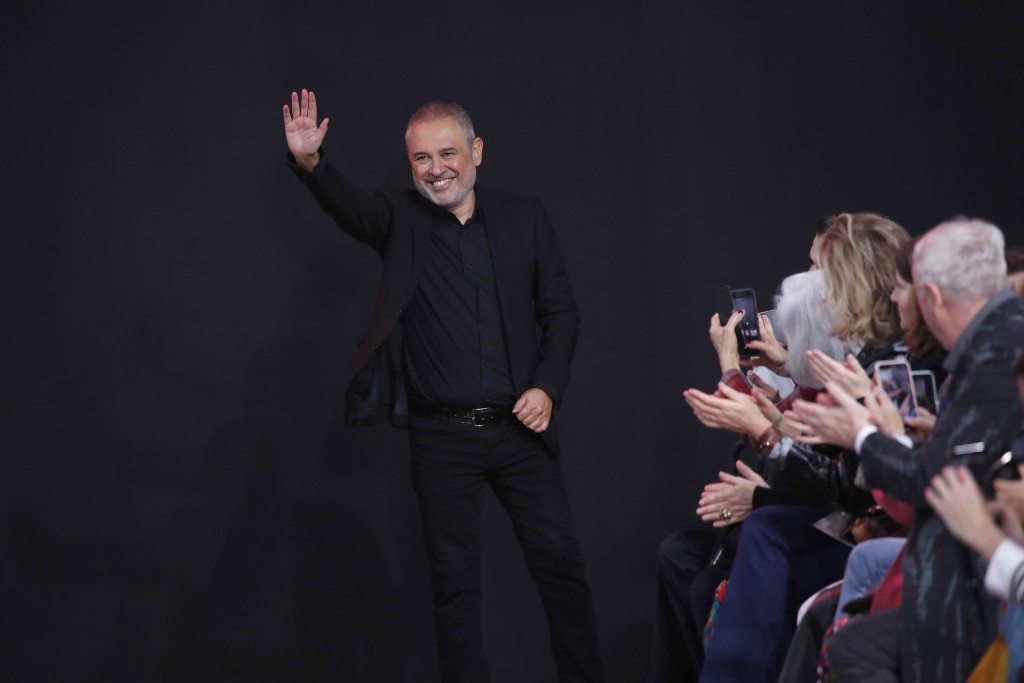 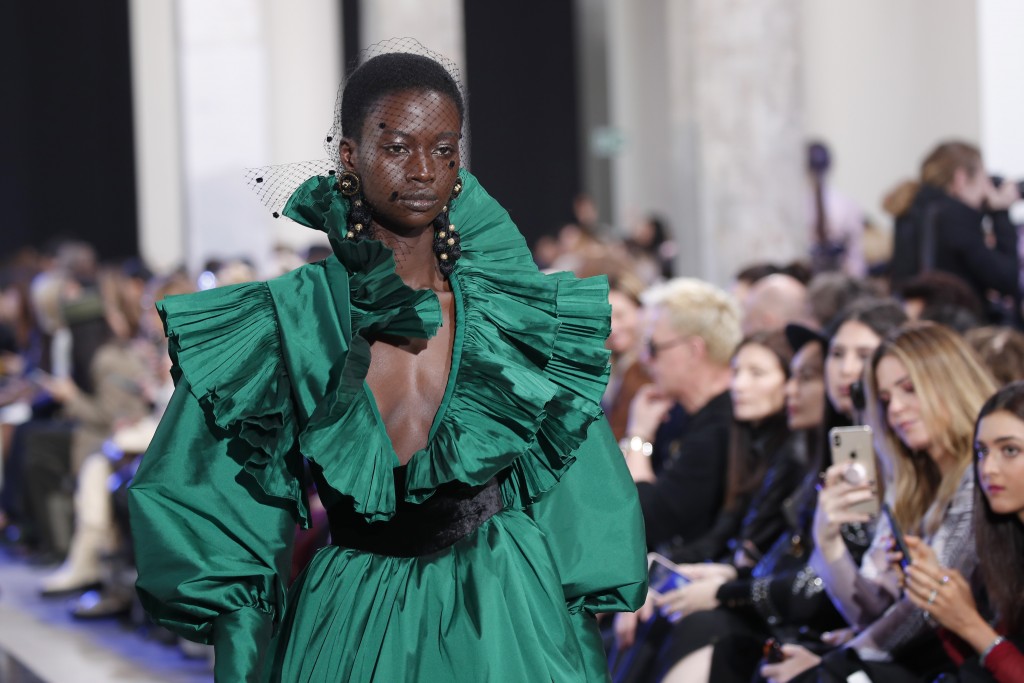 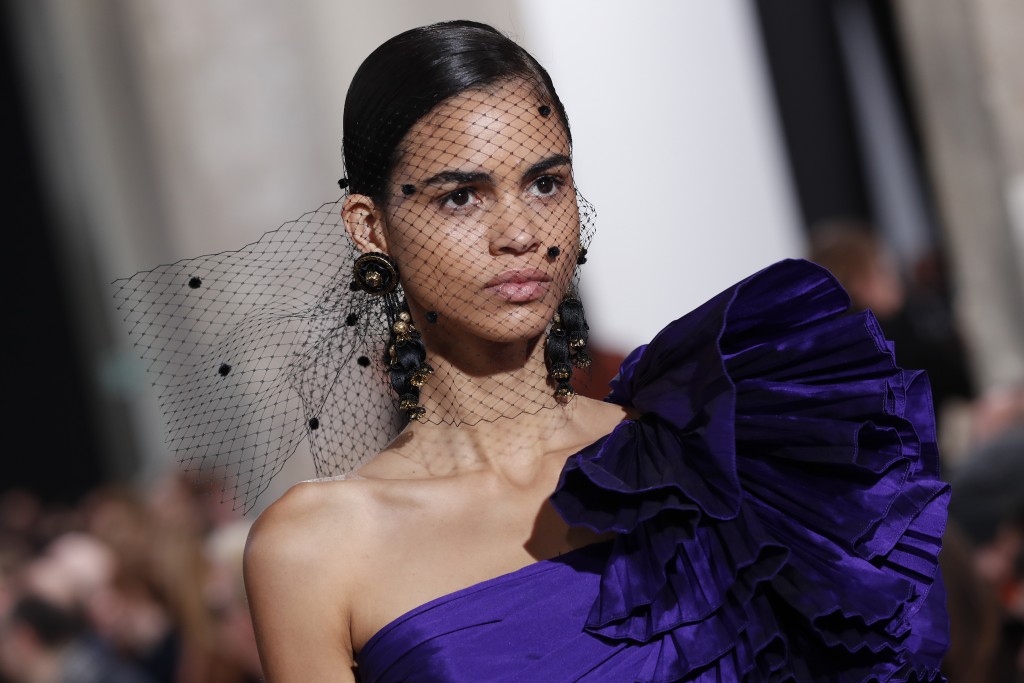 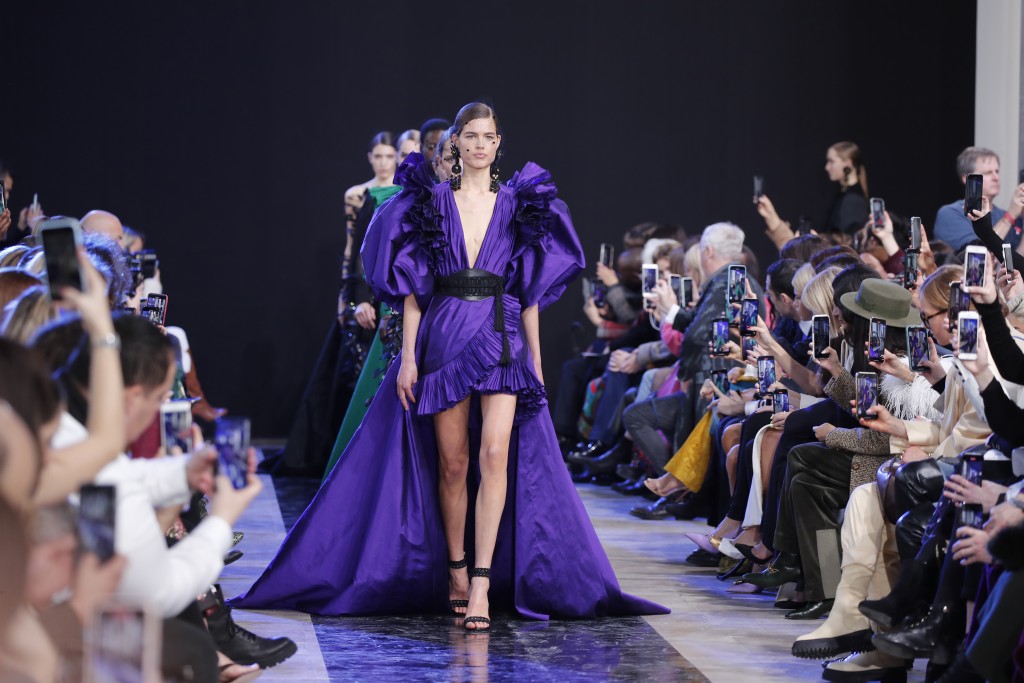 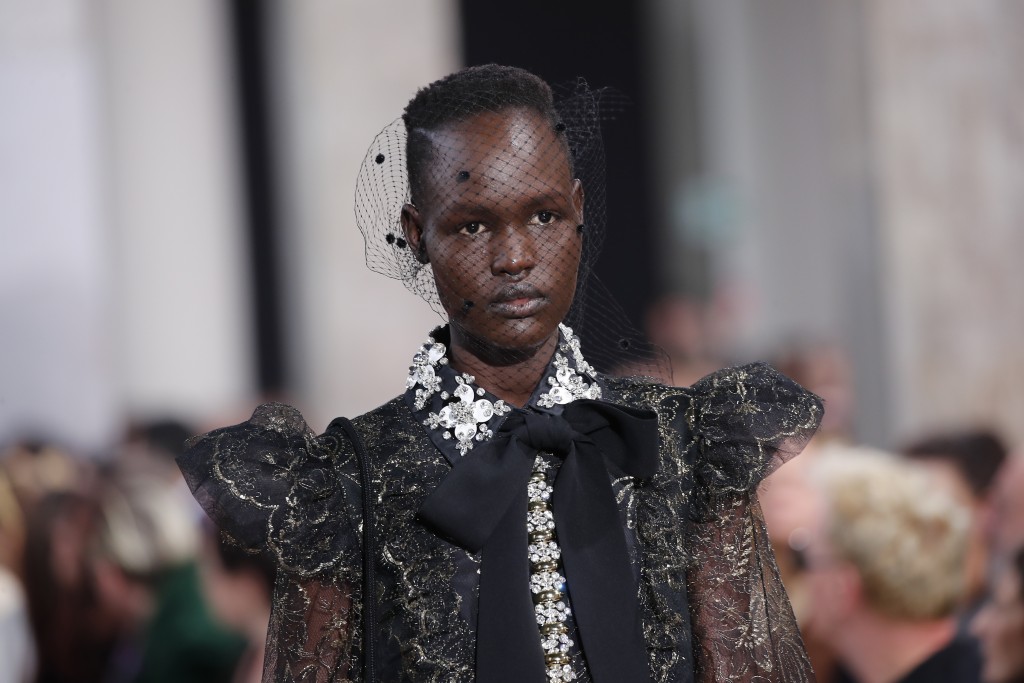 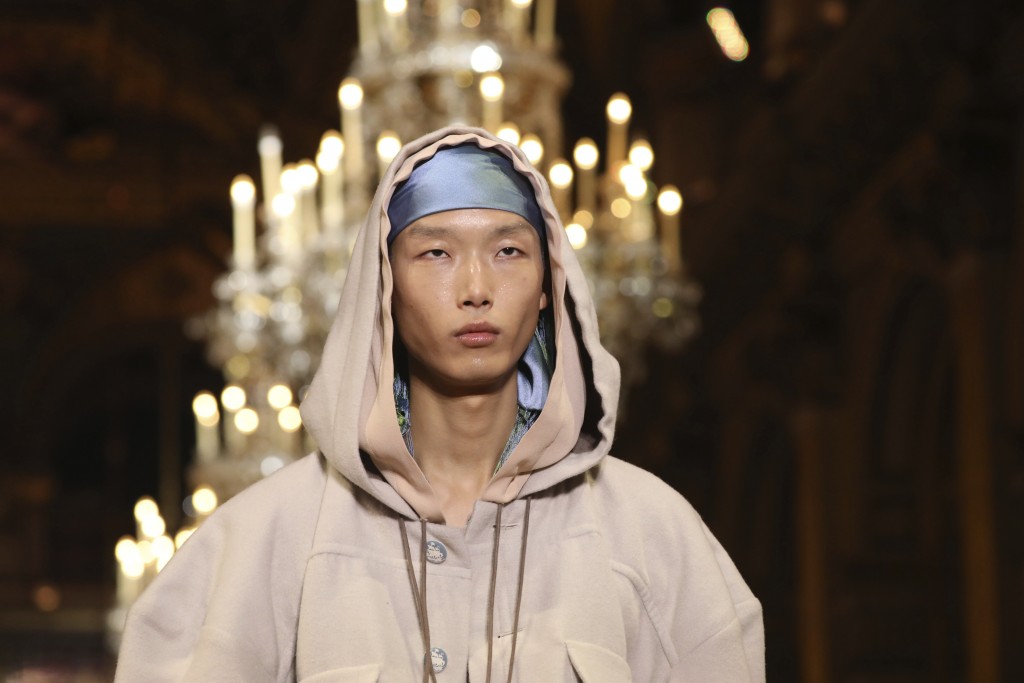 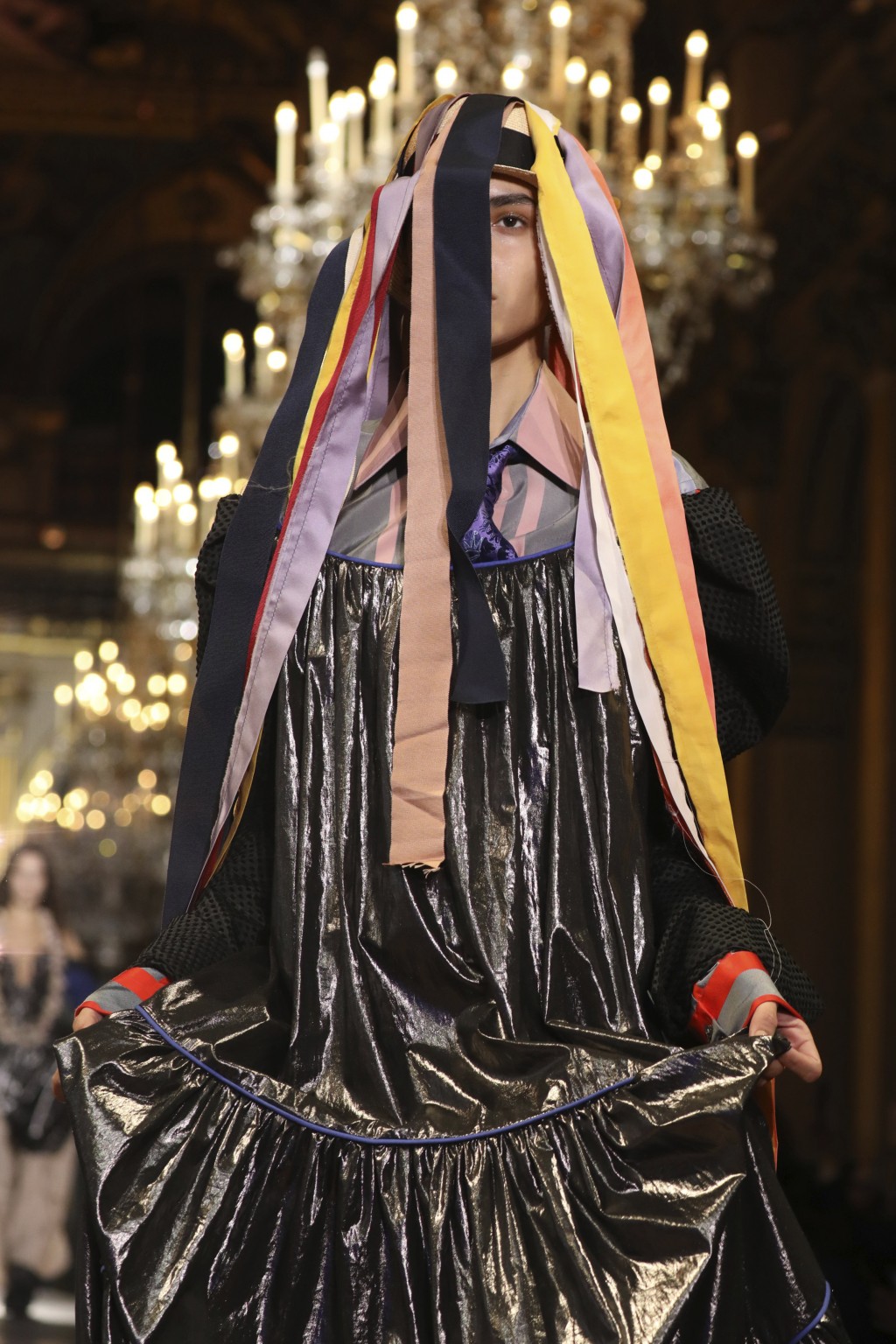 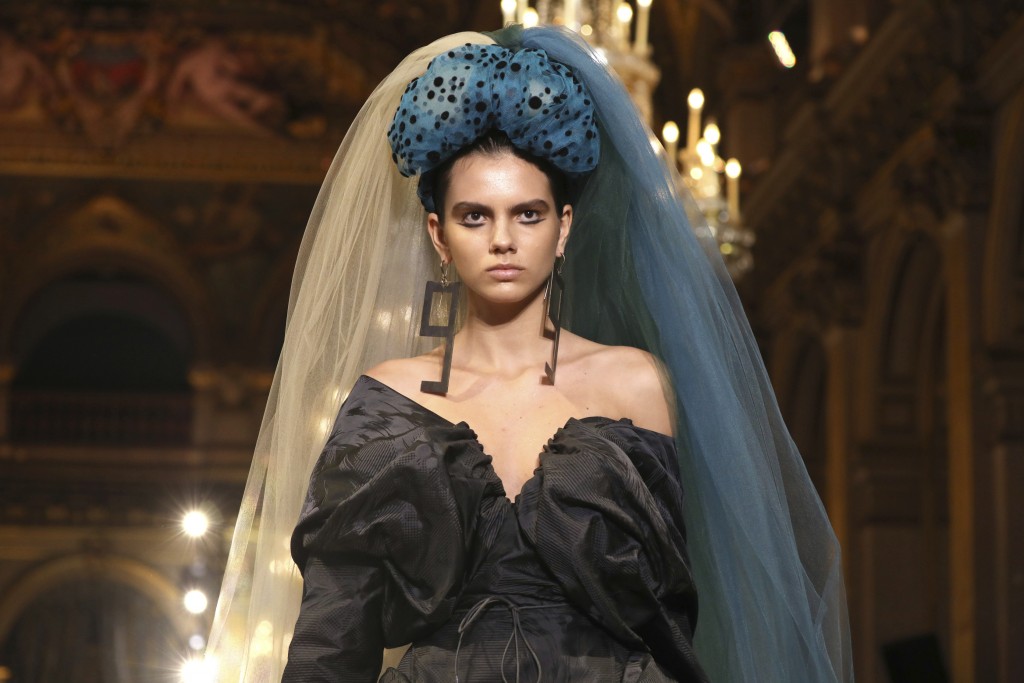 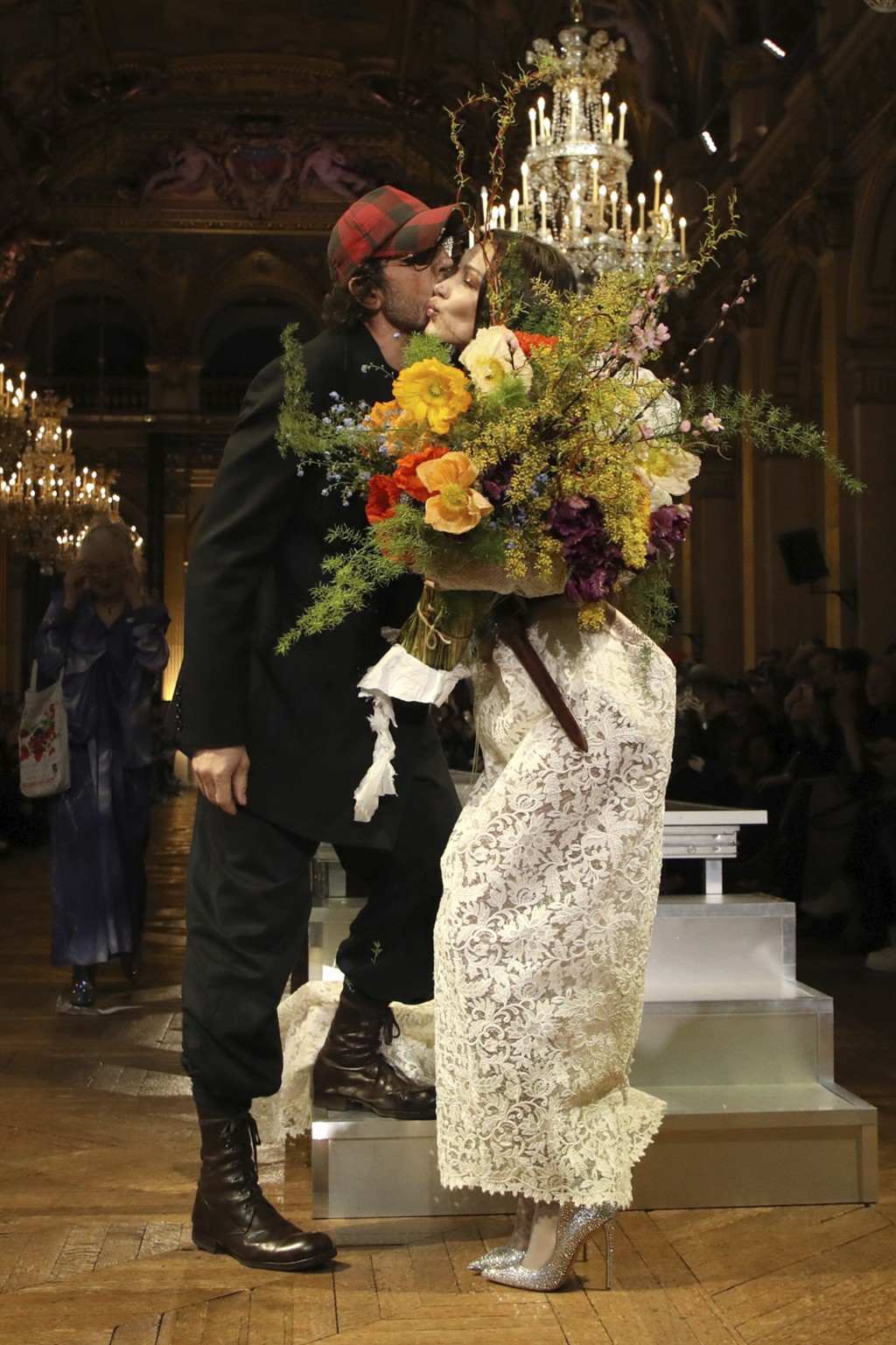 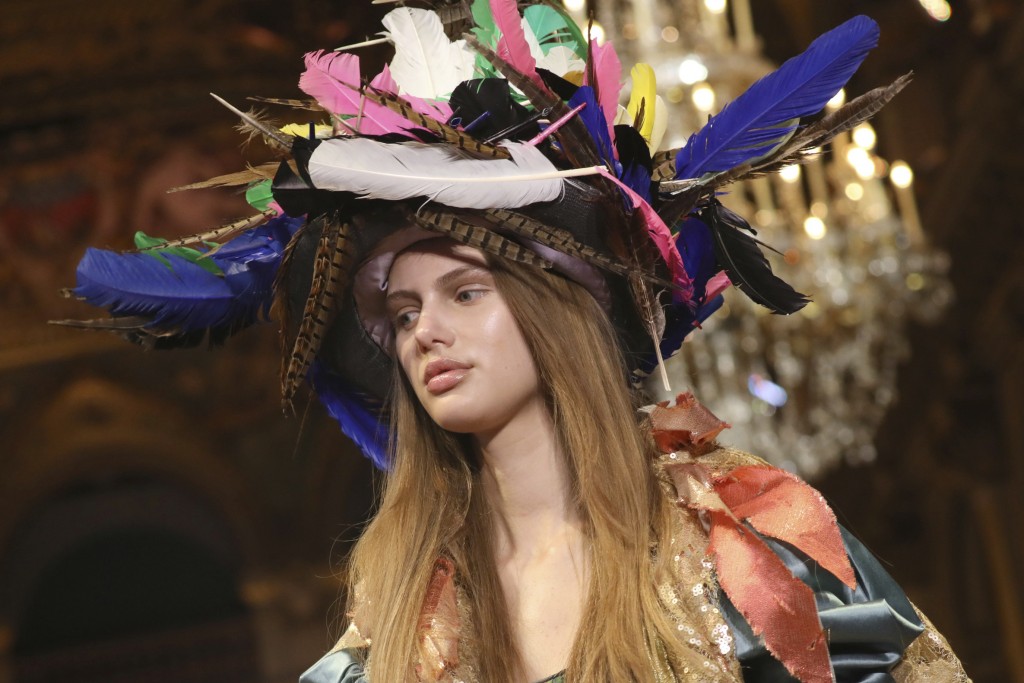 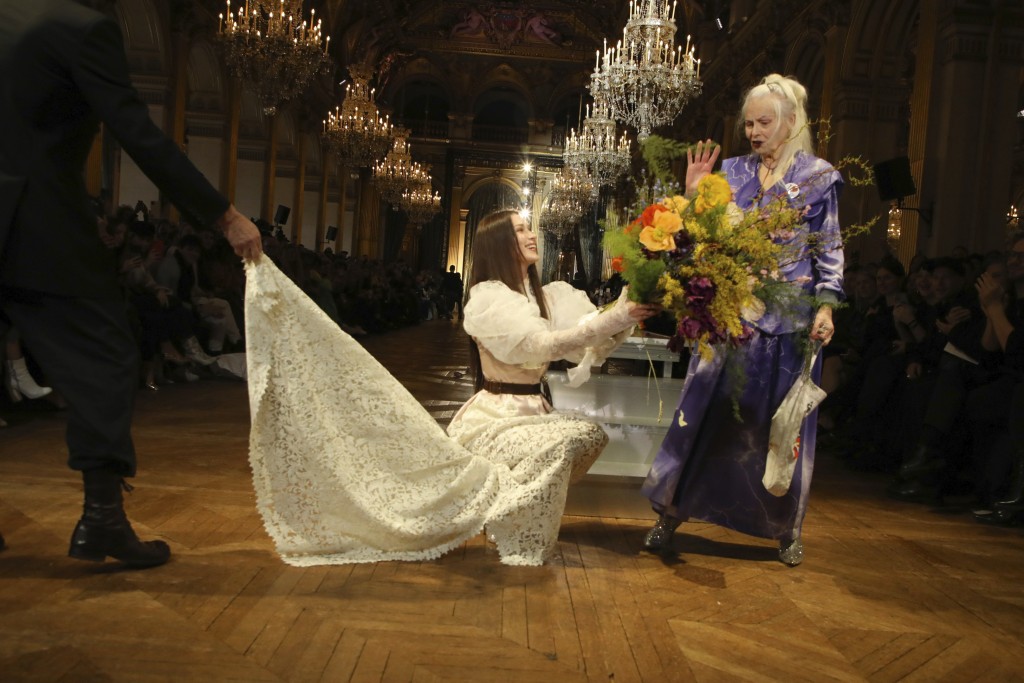 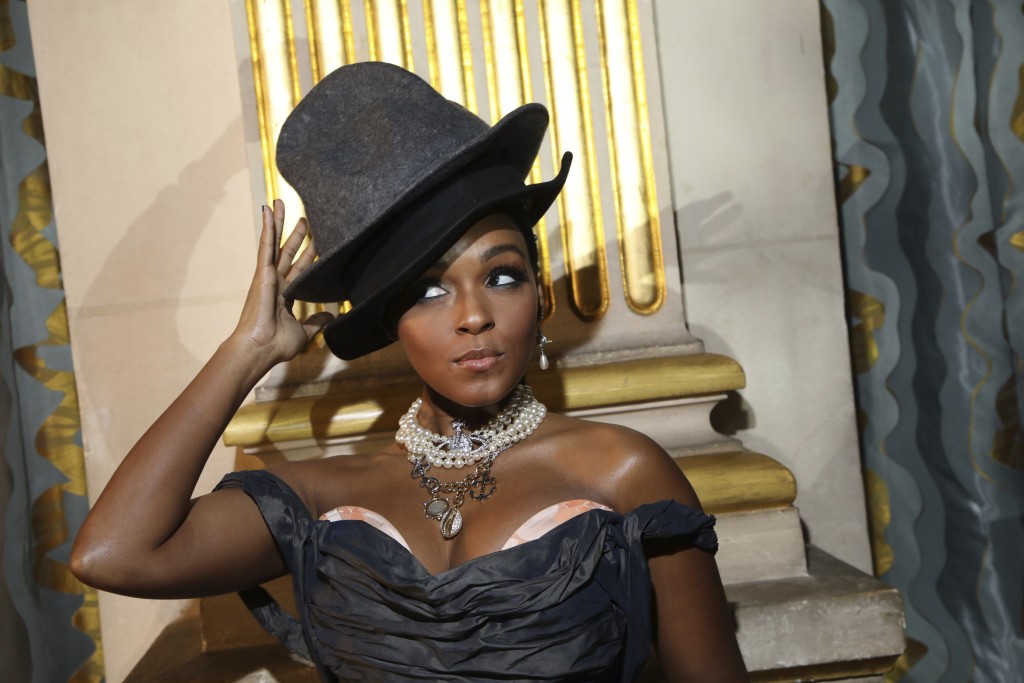 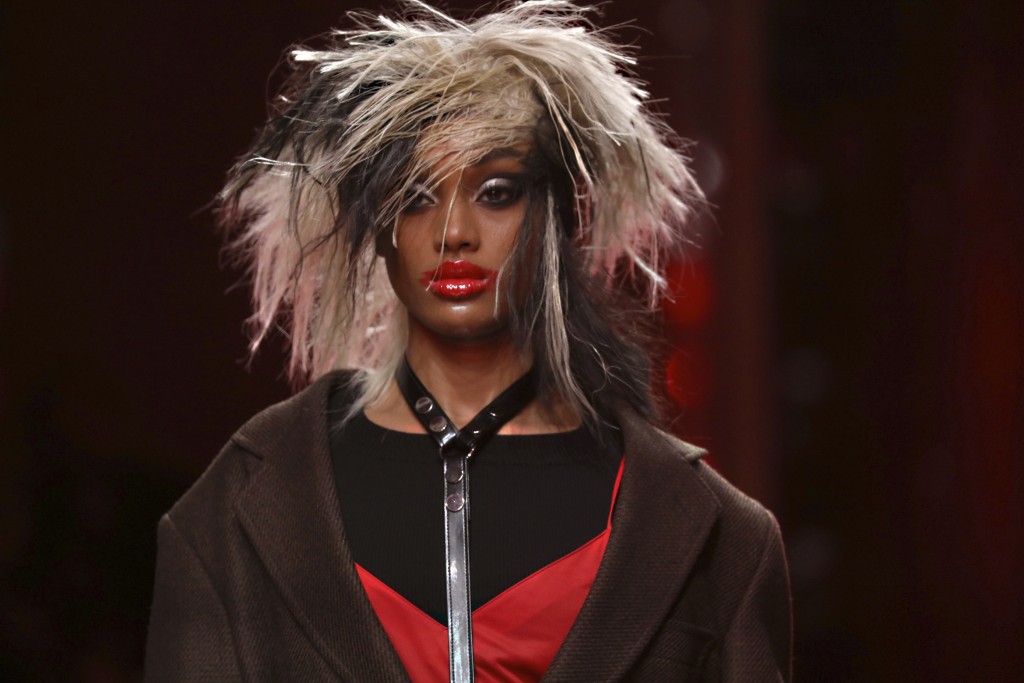 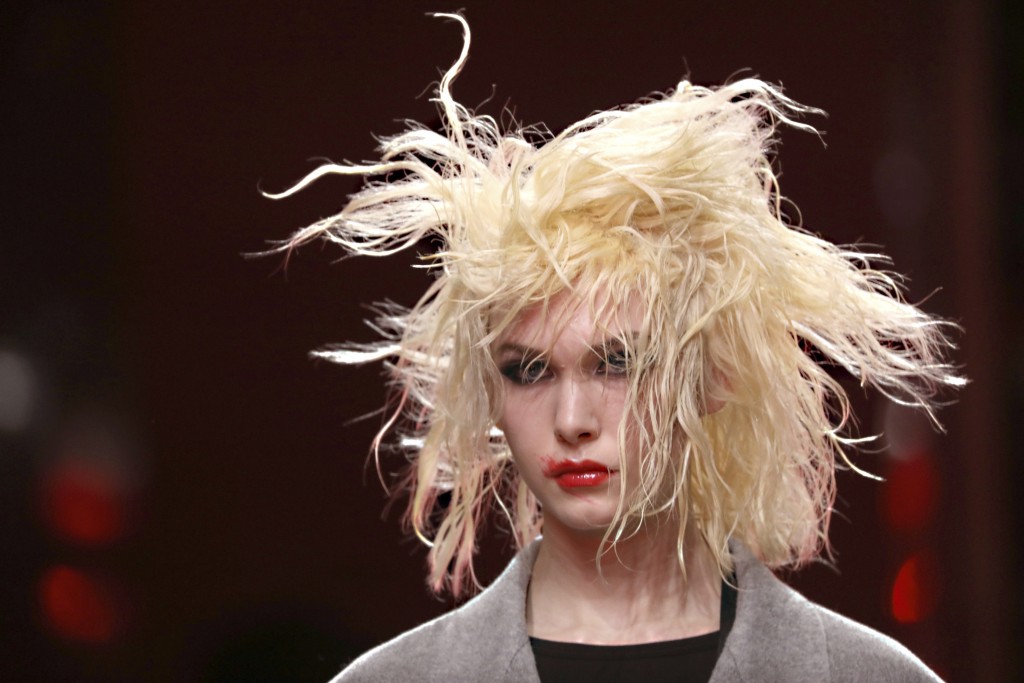 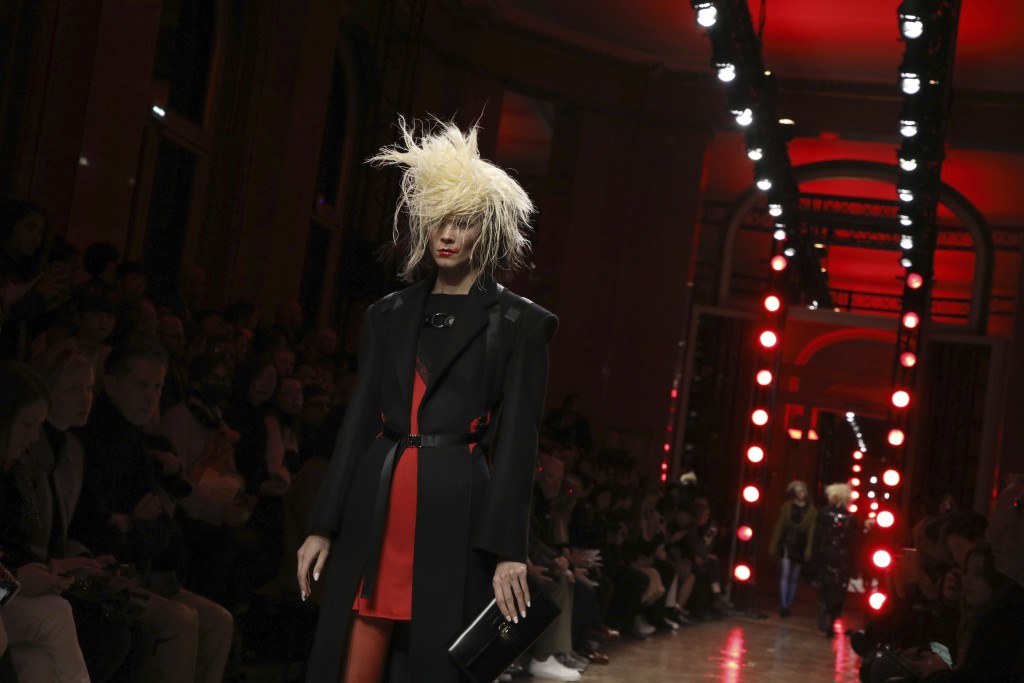 PARIS (AP) — A singer at Vivienne Westwood's eco-minded Paris Fashion Week show serenaded guests about fighting for the environment on Saturday. Elie Saab presented a 1970's-inspired study in the bow collar. And Agnes B. canceled her show scheduled for Monday in response to the coronavirus, the first such move by a French designer. Here are some highlights of fall-winter ready-to-wear shows for 2020.

The clothes, by designer Andreas Kronthaler, exuberantly mixed punk, with ethnic styles and the regal — all to dramatic effect under the sparkling crystal chandeliers of the City of Light's historic Hotel de Ville.

Then Westwood and Kronthaler posed with model-of-the-minute Bella Hadid in a voluminous sheer lace Marie Antoinette-style bustier and a garland of yellow blooms.

Yet it was the live warbling at the Westwood show that seemed to provoke the most interest.

“The year is 2020. A revolution is happening. People are fighting back,” an androgynous singer, with long hair and exposed breasts, sang at the foot of the runway. It added a further dimension to the 50 designs made of eco-minded and often-sustainable fabrics by the house that puts a spotlight on the fashion industry's responsibility to protect the environment.

As ever, Westwood's signature draping and period-style whooshes were used by Kronthaler in a collection with a urban, sporty edge. There were large veils, a crown of crystal-like shards, an Elizabethan ruff made up of garlic cloves. Sneakers sported princess-like multicolored ribbons. This was Kronthaler as his most subversive.

But it was also among one of his most vibrant with bright tartans, flashes of duke blue, prints and dazzling bronze gowns.

From oversize silk floppy ones to small tight stiff ones, in his collection this fall Elie Saab seemed to showcase everything under the sun — or, more fittingly, under the autumnal clouds. They appeared as the leifmotif for a retro display that was more sober than usual, with fastidious detailing such as face veils, flared cuffs and flounce.

It was, for the most part, monochrome — a theme broken up only by flashes of sea green and electric ultramarine. And with voluminous flared pants and oversize coats — with the proportions of a full skirt — this collection was a more covered up affair than usual from the normally skin-baring Lebanese designer.

Yet feminine styles abounded, such as in a pair of sexy marl “skorts” — a shorts-cum-skirt garment — twinned with thigh-high boots. At times, however, the oversize styles in the sleeves and torso visually overpowered the models' bodies.

THE ART OF THE INVITATION

The age of email and rising environmental awareness doesn't seem to have left much of a mark on the fashion industry's antiquated system of invitations.

Top houses vie for the wackiest or most imaginative idea that often bears a clue as to the theme of the runway collection.

Celine sent out a hardback A4 size book with pages that opened out into giant poster-photograph depicted crystals and minerals in close-up form. Indeed, its designer, Hedi Slimane, produced a collection teaming with sparkle.

Chloe's invite was attached to a metal brooch of two hands, held up in solidarity, for their show that celebrated female independence.

French designer Agnès b. announced she will cancel her Paris Fashion Week presentation “in view of the current international health context,” on the new coronavirus out of an abundance of caution.

Instead, an online statement from the house said that "film and photographs from the men's and women's winter 20/21 collection will be online Tuesday, March 3."

The cancelled show, originally scheduled for Monday at 6 p.m., marks the first time a French designer has canceled a show in Paris in response to the COVID-19 crisis.

The federation said in a statement that it will try to promote the brands online instead and “will make available all its communications platforms to allow these brands to share the work they had planned to present both in France and overseas."

White Modernist poles — with colored panels that evoked painter Piet Mondrian — were chosen by designer Nadege Vanhee-Cybulski as the backdrop of her fall collection for powerhouse Hermes.

The French designer, who's often been called a minimalist, used the Mondrian musing as the starting point for a retro and geometric collection. At times, it had a strong sanitized feel.

The all-white coat — redolent of the science laboratory — opened the show, with its long column silhouette and a storm-flap-style shoulder panels. But this then gave way to bold color: loose, layered knee-length dresses in cadmium blue, green-cyan and vivid red.

Stripes were abundant: in belts, or a retro turtleneck sweater with black suspenders. Geometric prints and shapes, meanwhile, fluttered on silk dresses.

Vanhee-Cybulski's references echoed back to Yves Saint Laurent, who fused Mondrian with fashion in his 1965 collection by adapting the artist’s geometric abstractions to dresses. Here, the Hermes designer has produced a fine collection, if lacking a little in punch.