TAIPEI (Taiwan News) — Kapok flowers are in full bloom along a country road in Tainan City’s Baihe District (白河), and the flamboyant flowers will last approximately 12 more days, according to a news release published on the Baihe District Office website on Monday (March 2).

The kapok flowers along Linchupi Kapok Road (林初埤木棉花道) were particularly well-formed and exquisite during the 228 Peace Memorial holiday thanks to the warm weather, according to the district office. The flowers attracted over 90,000 visitors during the three-day holiday.

Linchupi Kapok Road is nearly a kilometer long, with trees receding in parallel rows to form a blooming red canopy. Kapoks, also known as red silk-cottons, are deciduous trees with buds that blossom into five-petal arrangements of bright red.

For details, please refer to this site. 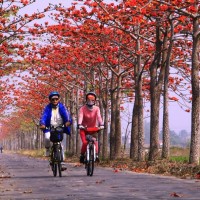 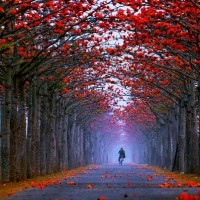