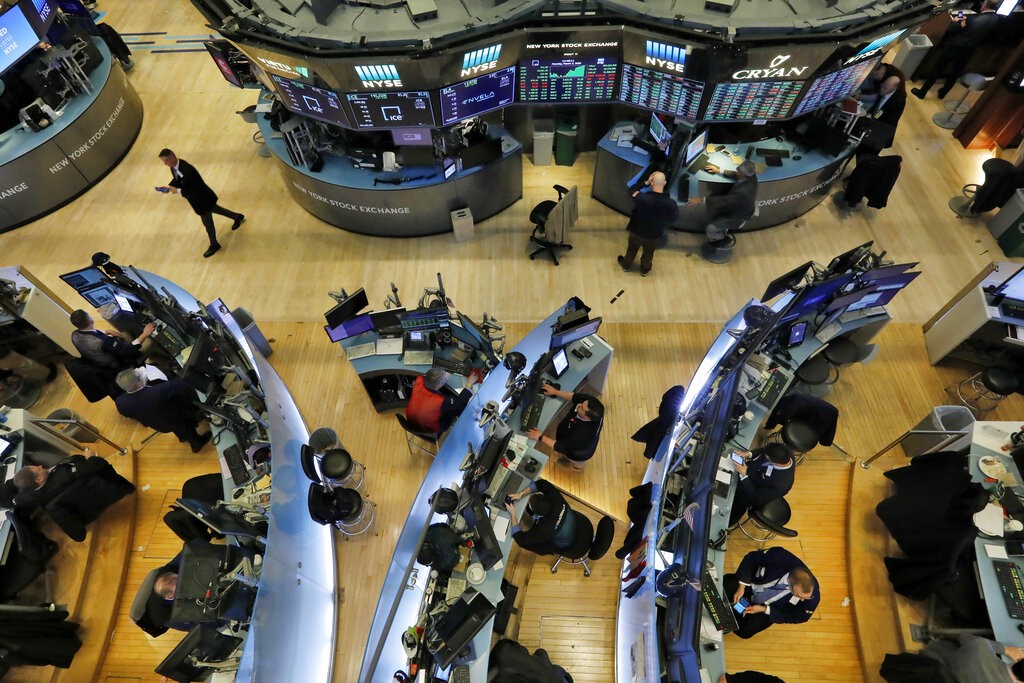 TOKYO (AP) — Asian shares rose Tuesday amid hopes that central banks will take action to shield the global economy from the effects of the coronavirus outbreak.

The upbeat mood in the region comes after the Dow Jones Industrial Average soared nearly 1,300 points, or 5%. The huge gains clawed back some of the ground lost last week in a massive sell-off that gave stocks their worst stretch since the financial crisis of 2008.

“So why are markets so pumped by prospects of monetary response; arguably not the most apt tool to address the direct fallout from coronavirus related disruptions,” said Vishnu Varathan at Mizuho Bank in Singapore.

“One reason may be that more nuanced measures to ease cash-flow will offer reprieve for businesses and households affected by seizures in activity and disruptions in supply-chains.”

On Wall Street, technology companies led the broad gains, which gave the Dow its biggest-ever point gain and biggest percentage increase since March 2009. The S&P 500 index jumped 4.6%, its best day since December 2018.

The virus epidemic that began in central China has been shutting down industrial centers, emptying shops and severely crimping travel all over the world. More companies are warning investors that their finances will take a hit because of disruptions to supply chains and sales.

Amid the worsening outlook, investors are increasingly anticipating that the Federal Reserve and other major central banks around the world will lower interest rates or take other steps to shield the global economy from the effects of the outbreak.

“Investors have convinced themselves that global central banks will likely be even more accommodative in order to short-circuit any psychological damage, ” said Sam Stovall, chief investment strategist at CFRA.

Bill Nelson, chief economist at the Bank Policy Institute and a former Fed economist, said the Fed and other major central banks, possibly including China's, could announce coordinated rate cuts by Wednesday morning. The cut would at least be a half-point and perhaps even three-quarters, he said.

“The only way to get a positive market reaction is to deliver more than expected,” he said.

The International Monetary Fund and World Bank announced simultaneously Monday that they are ready to help countries affected by the coronavirus through their emergency lending programs and other tools.

"We will use our available instruments to the fullest extent possible," the IMF managing director, Kristalina Georgieva, and World Bank President David Malpass said in a joint statement. "International cooperation is essential."

And Christine Lagarde, the head of the European Central Bank, said Monday that Europe's top monetary authority is ready to take “appropriate and targeted measures” if necessary to support the economy against the headwinds from the new coronavirus.

The statements echoed similar promises to act if necessary from the Federal Reserve on Friday and the Bank of Japan over the weekend. Traders have priced in a 100% probability that the Fed will cut rates by a half-percentage point during or before its March meeting.

One encouraging sign to traders is that the finance ministers and central bank leaders of the Group of Seven major industrial countries will hold a conference call on Tuesday to discuss an economic response to the viral outbreak.

There were signs that the economic impact was continuing to mount. A measure of China's manufacturing output plunged last month to its lowest level on record, as the viral outbreak closed factories and disrupted supply chains.

And the Organization for Economic Development, a research organization made up of mostly advanced economies, said Monday that the viral outbreak “presents the global economy with its greatest danger since the financial crisis" in 2008.

The OECD cut its world growth forecast and said that even if there are only limited outbreaks outside China, the global economy will grow just 2.4% this year, the weakest since the crisis. That forecast matches several private estimates.

If other countries are hit with outbreaks similar to China's, growth could fall as low as 1.5%, the OECD said.

Separately, economists at Goldman Sachs slashed their forecasts for U.S. growth to just 0.9% in the first quarter and to zero for the April-June quarter.

For investors, the great amount of uncertainty over how consumer behavior and spending will be affected has been unsettling.

“It’s not a typical economic blow," said Bill Strazzullo of Bell Curve Trading. "What if major cities are on some kind of a lockdown? What will that do to restaurants, entertainment, shopping, travel? It's almost impossible to game this out.”

Last week's rout knocked every major index into what market watchers call a "correction," or a fall of 10% or more from a peak. Market watchers have said for months that stocks were overpriced and long overdue for another pullback.

The last time the market had a drop of that size was in late 2018, when the trade war with China was escalating and investors were worried about rising interest rates. With Monday's surge, the S&P 500 is now 8.7% below the record high it reached February 19.

The stock surge notwithstanding, the fact that investors are holding onto Treasurys at near record-low yields shows they are still worried.

“The fear factor is still very high,” said Kirk Hartman, president of Wells Fargo Asset Management. “Do you really want to own a 10-year Treasury at 1 percent? I don’t think so. I think this is a classic market in crisis.”

Technology and health care stocks accounted for a big share of the gains. Apple climbed 9.3% and Gilead Sciences rose 8.7%. The biotechnology company has been testing one of its drugs as a potential treatment for the coronavirus.

China has seen most of the virus cases worldwide. In the United States, with dozens of cases and a handful of fatalities, fear was driving some to wipe store shelves clean of bottled water, hand sanitizer and other essential goods.