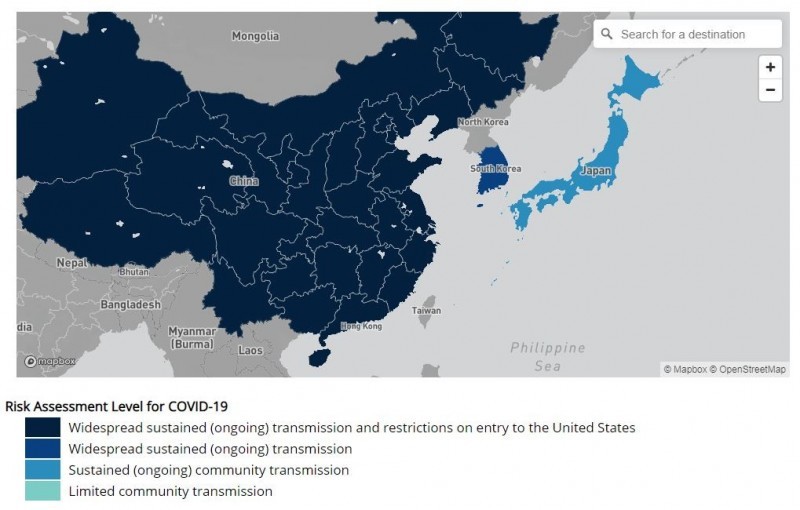 TAIPEI (Taiwan News) — In its most up-to-date information for travelers, the U.S. Centers for Disease Control (CDC) listed Communist China as being at the highest level of risk of transmitting the novel coronavirus (COVID-19), while Taiwan and three Southeast Asian countries have been taken off the list, which had previously suggested there were cases of community spread on the island.

On its updated page title "Coronavirus Disease 2019 Information for Travel," the CDC has uploaded a map in which countries are assigned colors based on their risk level for the disease. On the map, China and Iran are highlighted in dark blue, which signifies the highest risk level and is described as "widespread sustained (ongoing) transmission and restrictions on entry to the United States."

At the next level, which the CDC describes as "widespread sustained (ongoing) transmission," the CDC lists South Korea and Italy. The disease center again recommends travelers "avoid all nonessential travel" to these countries.

In the category titled "Sustained (ongoing) community transmission," the agency lists Japan. The CDC then recommends that older adults or persons with chronic medical conditions "consider postponing travel" to the country.

Lastly, in turquoise, the CDC lists Hong Kong has having "limited community transmission." It suggests that visitors to the special administrative region "practice usual travel precautions."

On Feb. 20, the CDC inexplicably included Taiwan on this list of destinations with apparent community spread, along with Hong Kong, Japan, Singapore, South Korea, Thailand, and Vietnam.

That same day, Taiwanese President Tsai Ying-wen (蔡英文) denied that there was community spread in Taiwan as there were only isolated cases of the disease. Foreign ministry spokeswoman Joanne Ou (歐江安) reiterated the government's stance by saying that the country does not fit the criteria set by the CDC for community transmission.

The CDC on Sunday (March 1) removed Taiwan, Singapore, Thailand, and Vietnam from the list of countries with community spread, but it has not given an explanation as to why.

In its situation summary on the spread of the Wuhan coronavirus, the U.S. Centers for Disease Control (CDC) on Jan. 21 posted an erroneous map that included Taiwan as a part of China. Ou said on Jan. 23 that after requests for corrections had been made by the ministry and Taiwan's Representative Office in the U.S., the CDC had made adjustments accordingly.