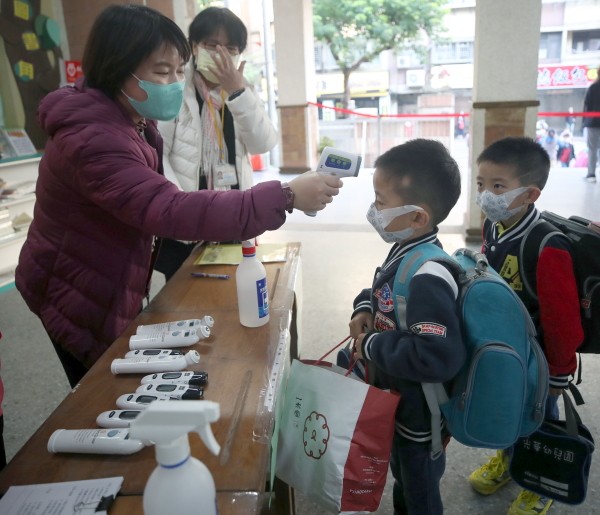 TAIPEI (Taiwan News) — As thousands of Taiwanese students went back to school on Tuesday (Feb. 25), 578 were found to have a fever.

After the end of the Lunar New Year break for primary and secondary schools, which was extended due to the Wuhan coronavirus outbreak, 578 students registered a fever on the first day of classes, announced Education Minister Pan Wen-chung (潘文忠) at a press conference on Wednesday (Feb. 26), according to CNA. Pan called on parents to take their children's temperature each day before they go to school.

If students are found to have a forehead temperature of 37.5 Celsius or higher, an ear temperature of at least 38 Celsius, or a respiratory condition such as coughing or non-allergic runny nose, Pan said parents should take the initiative and ask for their children to stay home, reassuring them that students who stay home because of these symptoms will not be listed as absent.

Pan said that teachers should pay close attention to the health of students at all times. He said that if a student develops a fever, they should be placed in a separate space before contacting the parents, accompanied by a designated person and assisted in seeking medical treatment.

After presiding over a Ministry of Education (MOE) meeting, Pan told the media that the first day of classes went relatively smoothly. He said that all the students who registered a fever were placed in isolation rooms in accordance with standard operating procedures.

Pan then informed parents about follow-up arrangments such as medical treatment. Due to the fact that some students were undergoing quarantine and some parents had asked for their children to stay home, the actual number of students who missed class on the first day has not yet been fully calculated.

He also noted that some schools had reported a shortage of forehead scanners. He explained that the emergency purchase of forehead thermometers has been divided into two tranches due to manufacturers' shipping limitations.

The first wave of 12,500 forehead scanners had been distributed to every school before the start of classes, said Pan. The second major shipment should arrive after the 228 Peace Memorial Day and before March 2, he added.

He explained that the supply of epidemic prevention supplies is based mainly on the number of students, regardless of whether a school is public or private. Pan added that additional supplies, such as disinfectant alcohol, will continue to be provided.