TAIPEI (Taiwan News) — After touring some areas affected by the Wuhan coronavirus, the World Health Organization (WHO) Assistant Director-General Dr. Bruce Aylward lavished praise on Communist China for its handling of the outbreak and expressed his doubts that many other countries in the world will be able to contain it.

Despite the fact that at least 77,660 people have been infected with the novel coronavirus (COVID-19) and 2,663 have perished in China, not to mention the 2,765 infections and 47 deaths from the disease outside the country, Aylward patted Chinese authorities on the back for reducing the new number of cases with their "robust" approach. However, much of this "decrease" could actually be attributed to the numerous modifications the government has made to narrow the scope of what is considered "confirmed" cases.

Glazing over the initial slow response by government officials that arguably enabled the disease to spread across the planet in the first place, Aylward said, "The world is in your debt," according to CGTN. The WHO envoy claimed that "Hundreds of thousands of people in China did not get COVID-19 because of this aggressive response," reported CTV News.

Reports continue to leak out of Wuhan that the supposed decrease in the number of reported cases is the result of hospitals underreporting cases. In a Fox News report on Feb. 3, Gordon Chang, author of the book "The Coming Collapse of China," claimed that local authorities had "lost the ability to pick up corpses."

A staffer from a funeral home in Wuhan, the epicenter of the novel coronavirus (2019-nCoV) outbreak, claimed the number of bodies she and her co-workers have had to transport and cremate each day is four to five times higher than the usual amount. Based on the account, the daily average number of bodies suspected of being coronavirus victims is estimated at 225 at a single Wuhan funeral home, or 4,725 in total between Jan. 22 and Feb. 12.

There are eight registered funeral homes in Wuhan. If the funeral home staffer's account is true, it would mean there were 1,628 deaths per day in the city and a total of 34,200 in the 21 days leading up to the report.

After heaping praise on the questionable methods China has used to contain the outbreak, Aylward said the "big conclusion for the world is — it's simply not ready," reported Business Insider. He said that other countries may not have the same "disease-surveillance setup as China" and called on other countries to mimic the methods employed in the autocracy.

Aylward said the key to China's "success" in allegedly containing the outbreak is the way that different areas used a "tailored approach" to different regions to avoid exhausting their resources. However, there have been numerous reports of a lack of test kits, masks, medical supplies, and hospital beds in Wuhan throughout the outbreak.

After having safely returned to WHO headquarters in Geneva, Switzerland, Aylward expressed confidence in the communist regime's health care system, proclaiming: "You know, if I had COVID-19, I'd want to be treated in China." 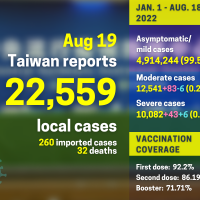