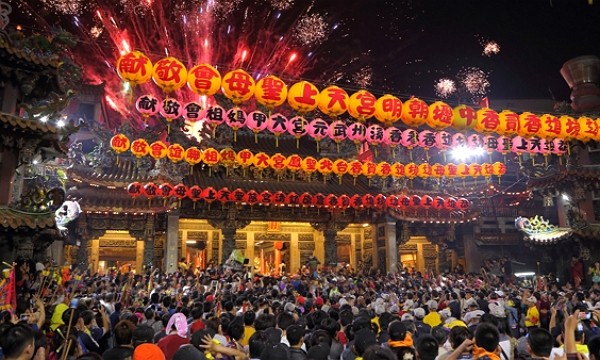 TAIPEI (Taiwan News) — The annual pilgrimage of the goddess Matsu and her worshippers will proceed as scheduled from March 19 to 28, the organizers said during a press conference Wednesday (Feb. 26).

The pilgrimage, which is set to begin in the Taichung township of Dajia and pass through Yunlin, Chiayi, and Changhua counties, draws tens of thousands of revelers and foreign onlookers each year. However, as the number of the Wuhan coronavirus (COVID-19) infections continues to rise in Taiwan and around the world, the highly anticipated religious event has caused public concern over the possibility of it becoming a hotbed for the disease.

Weighing the risks of possible community-transmitted infection, the Centers for Disease Control (CDC) and other medical experts have encouraged organizers of the pilgrimage to postpone the event. Many netizens have also urged pilgrims to sit this year's celebration out in the interest of public health, reported Liberty Times.

On Wednesday, Jenn Lann Temple Chairman Yen Ching-piao (顏清標) announced that the pilgrimage will be carried out as planned but that the kick-off dinner party and "Children of Dajia Matsu" concert have both been canceled. He added that the temple will donate approximately NT$30 million (US$1 million) to the government for medical supplies.

Yen also promised that he and the organizers would follow the government's orders if the epidemic in Taiwan worsens. He said that there will be sanitizing stations along the pilgrimage route and that he will keep an eye on any new policies the government might issue in the next few weeks, reported ETtoday.