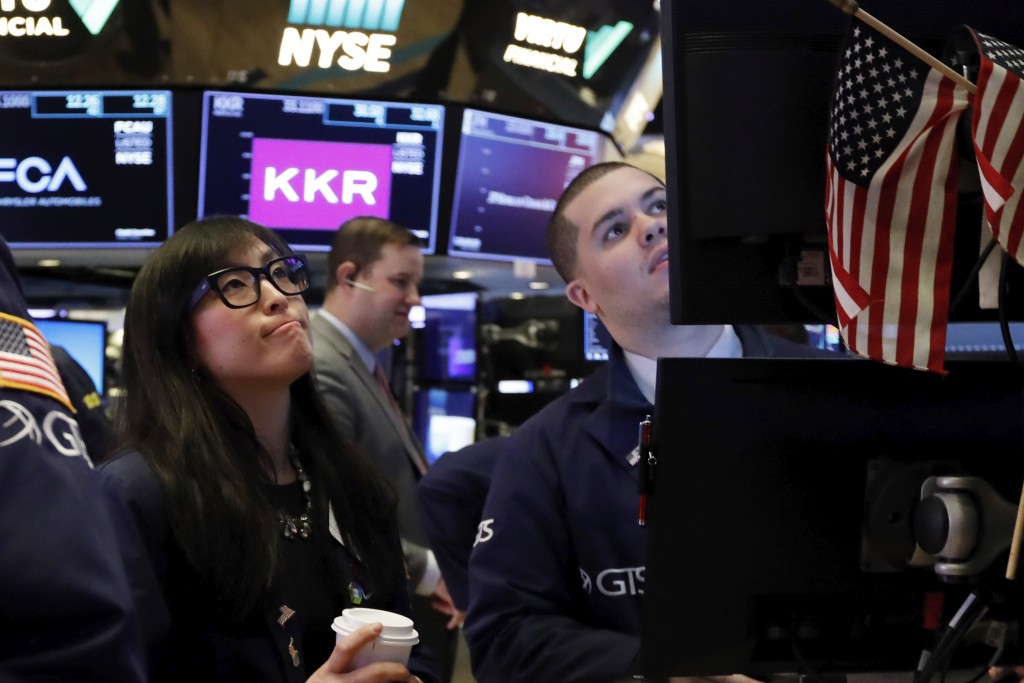 The Dow Jones Industrial Average slumped more than 1,000 points Monday in the worst day for the stock market in two years as investors worry that the spread of a viral outbreak that began in China will weaken global economic growth.

Traders sought safety in U.S. government bonds, gold and high-dividend stocks like utilities and real estate. The yield on the 10-year Treasury fell to the lowest level in more than three years.

Technology companies, whose supply chains have been disrupted, accounted for much of the broad market slide, which wiped out all of the Dow’s and S&P 500’s gains for the year.

More than 79,000 people worldwide have been infected by the new coronavirus. China, where the virus originated, still has the majority of cases and deaths. The country's economy has been hardest hit as businesses and factories lie idle and people remain homebound because the government has severely restricted travel and imposed strict quarantine measures to stop the virus from spreading. Economists have cut growth estimates for the Chinese economy.

The ripple effects of the outbreak are being felt all around the world, as China is both a major importer of goods as well as a source of parts through intricate supply chains.

China's government promised tax cuts and other aid Monday to help companies recover despite anti-disease controls that shut down much of the world's second-largest economy last month. Forecasters say it is likely to be at least mid-March before automakers and other companies return to full production.

Still, while concern about the virus has prompted some sporadic selling in the past few weeks, for the most part global markets have traded as if the virus' impact would be limited. Until Monday, the major U.S. stock indexes had all been in the green.

The rapid spread to other countries, however, is raising anxiety about the growing threat the outbreak poses to the global economy.

“Stock markets around the world are beginning to price in what bond markets have been telling us for weeks – that global growth is likely to be impacted in a meaningful way due to fears of the coronavirus,” said Chris Zaccarelli, chief investment officer for Independent Advisor Alliance.

The slump in U.S. indexes followed a sell-off in markets overseas. South Korea’s Kospi fell sharply after the government said the country is now on its highest alert for infectious diseases after cases there spiked. Italy's benchmark tumbled after the number of virus cases there rose dramatically and a dozen towns in the northern part of the country were put under quarantine. There are also more cases of the virus being reported in the Middle East as it spreads to Iran, Iraq, and Kuwait, among others.

The viral outbreak threatens to crimp global economic growth and hurt profits and revenue for a wide range of businesses. Companies from technology giant Apple to athletic gear maker Nike have already warned about a hit to their bottom lines. Airlines and other companies that depend on travelers are facing pain from cancelled plans and shuttered locations.

Technology companies were among the worst hit by Monday's sell-off. Apple, which depends on China for a lot of business, slid 4.8%. Microsoft dropped 4.3%. Banks such as JPMorgan and Bank of America were also big losers.

Cruise lines suffered steep losses, as Carnival, Royal Caribbean Cruises and Norwegian Cruise Line were three of the top four decliners in the S&P 500, each falling around 9%. American Airlines also dropped sharply, and after the market closed, United Airlines withdrew its earnings estimate for 2020 because of uncertainty over how long the virus outbreak will last

Gilead Sciences climbed 4.6% and was among the few bright spots. The biotechnology company is testing a potential drug to treat the new coronavirus. Bleach-maker Clorox was also a standout, rising 1.5%.

Utilities and real estate companies held up better than most sectors. Investors tend to favor those industries, which carry high dividends and hold up relatively well during periods of turmoil, when they're feeling fearful. They're now the best-performing sectors in the S&P 500 for the year, while the tech sector has lost ground.

In the eyes of some analysts, stocks are finally catching up to the bond market, where fear has been dominant for months.

“The yields have been moving lower all year, so that's providing a tail wind for utilities, for real estate,” said Willie Delwiche, investment strategist at Baird. “In the face of this heightened uncertainty, especially if it's centered overseas, tech is going to bear some of the brunt of that because it's been so popular, because it's done so well, and because it has so much exposure to Asia.”

U.S. government have turned to the safety of bonds throughout 2020, even as stocks overcame stumbles to set more records. The 10-year yield on Monday was near its intraday record low of 1.325% set in July 2016, according to Tradeweb. The 30-year Treasury yield fell further after setting its own record low, down to 1.83% from 1.92% late Friday.

Traders are increasingly certain that the Federal Reserve will cut interest rates at least once in 2020 to help prop up the economy. They’re pricing in a nearly 95% probability of a cut this year, according to CME Group. A month ago, they saw only a 68% probability.

Of course, some analysts say stocks have been rising in recent weeks precisely because of the drop in yields. When bonds are paying such meager amounts, many investors say there’s little real competition other than stocks for their money.

The view has become so hardened that “There Is No Alternative,” or TINA, has become a popular acronym on Wall Street. Even with Monday’s sharp drops, the S&P 500 is still within 4.2% of its record set earlier this month.

Investors looking for safe harbors bid up prices for U.S. government bonds and gold. The yield on the 10-year Treasury note fell sharply, to 1.37% from 1.47% late Friday.