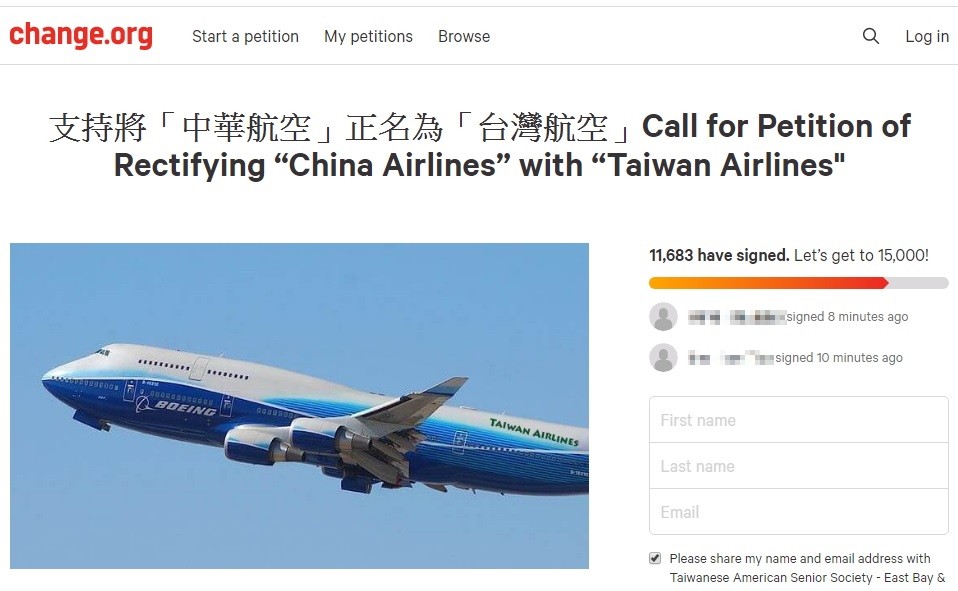 TAIPEI (Taiwan News) — A Taiwanese group based in the U.S. has posted a petition calling on President Tsai Ing-wen (蔡英文) to change the name of China Airlines to "Taiwan Airlines" as countries mistakenly associate it with Communist China as the Wuhan coronavirus rages.

On Thursday (Feb. 20), Taiwanese American Senior Society - East Bay & Washington DC launched a petition on the U.S. website Change.org calling for the name of Taiwan's national carrier China Airlines to be changed to "Taiwan Airlines." The petition's creators pointed out that the airline's current name has led to a "fiasco" in several countries over travel restrictions to contain the spread of the Wuhan coronavirus (COVID-19) from China.

The group stated that on Jan. 30, Italy included China Airlines (as well as EVA Air) in its bans on flights to and from China. On Feb. 1, Vietnam followed suit, although the ban was soon lifted after an outcry from Taiwan.

The Philippines also imposed a travel ban on all visitors from Taiwan on Feb. 10, allegedly because of President Rodrigo Duterte's "one China" policy. However, after "appeals made by concerned groups," including Filipino employees of I-Mei Foods Co., the Philippines lifted the ban on Feb. 14.

The petition stated that approximately 100 countries have now imposed strict immigration and entry controls on Chinese citizens. The authors then wrote that Taiwan has at times been unfairly included in the bans, pointing out that "Taiwan is an independent state from the People's Republic of China" and that the numbers of confirmed cases of COVID-19 are far lower in Taiwan, both proportionately and in absolute numbers.

The creators of the petition then called on Tsai to "take proactive steps toward the action of changing 'China Airlines' to more identity-driven 'Taiwan Airlines.'" The petitioners pointed out that the no referendum or constitutional amendment would be needed to make the change, but they did acknowledge that the change could affect operations, revenues, and aviation rights.

The petition, titled "Call for Petition of Rectifying 'China Airlines' with 'Taiwan Airlines,'" has thus far gained 11,683 signatures. Those wishing to sign the petition can do so by visiting its official page on Change.org.

Similarly, on Feb. 3, pro-Taiwan independence group Taiwan Republic Office (台灣國辦公室) called for the airline's name to be changed to "Formosa Airlines" (福爾摩沙航空) or "Yushan Airlines" (玉山航空). The group's director, Chilly Chen (陳峻涵), said that in the wake of Taiwan's inclusion within Italy's ban on flights from China, it has become even more urgent to change its name.

Chen said that the official English translation of "China Airlines" (華航), which could also be interpreted as "Mandarin Airlines," sounds too much like an organization from China. He stated that like the sporting banner of Chinese Taipei, the name has an odd ring to it, and thus other countries and international organizations could easily mistakenly associate China Airlines with the communist country.