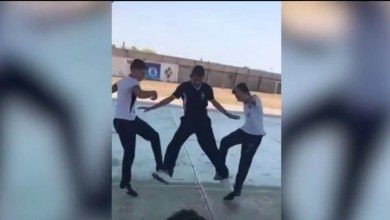 TAIPEI (Taiwan News) — In response to increased casualties worldwide caused by the Tripping Jump Challenge, Taiwan's Ministry of Education (MOE) is issuing a letter to schools that recommends a ban on the prank popular among young students.

Taiwan schools at all levels are slated to reopen after Feb. 25, but the ministry is appealing to school administrators to prevent students from participating in the game in which three individuals in a line jump and the unaware middle person is tripped. The ministry warns that the challenge is fatal and cost a 16-year-old Brazilian girl her life in November 2019. Dozens were reportedly injured from the game, with a number of head and spinal traumas resulting.

There are several videos recently circulating which show students jumping and falling to the ground after being unsuspectingly tripped by other students. Concerned parents are said to have made reports to the authorities in the hope that action may be taken.

In the letter, the MOE notes that the prank can easily lead to injuries and requests school administrators raise awareness of the dangers or simply ban it.

Legislators Clair Wang (王婉諭) and Tsai Pi-ju (蔡壁如) recently also warned of the dangers of the prank and reminded parents to talk to their children about it.

A lawyer told Taiwan News that those engaging in the prank, if it causes injury to others, may face a fine or jail sentence according to Article 284 of the Criminal Law, and parents should inform their children of the legal consequences.