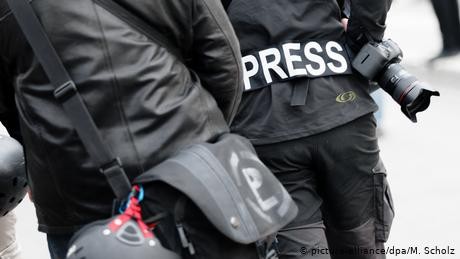 China has revoked the press credentials of three reporters from The Wall Street Journal, following the publication of an opinion article titled "China is the Real Sick Man of Asia," the country's foreign ministry said on Wednesday.

The Journal reported that deputy bureau chief Josh Chin and reporter Chao Deng, both US nationals, as well as reporter Philip Wen, an Australian, had been ordered to leave the country within five days.

China's Foreign Ministry spokesman Geng Shuang on Wednesday slammed the headline as being racist, and said the paper had refused to apologize or investigate those responsible.

"The editors used such a racially discriminatory title, triggering indignation and condemnation among the Chinese people and
the international community,'' he said.

The piece, written by Bard College professor Walter Russell Mead, called China's initial response to the new coronavirus outbreak "less than impressive" and referred to the Wuhan city government as "secretive and self-serving." The piece, published on February 3, "slandered the efforts of the Chinese government and the Chinese people to fight the epidemic," said Geng.

The move comes just a day after the United States announced it would begin treating five Chinese state-run news agencies, including Xinhua News and China Global Television network, the same as foreign embassies — a move that requires the outlets to register employees and US properties with the US State Department. Beijing slammed the new classification as "unreasonable and unacceptable."

Geng criticized the measure in a regular press briefing on Wednesday, saying: "The United States has always advertised freedom of the press, but it interferes with and obstructs the normal operation of Chinese media in the United States."

"We reserve the right to respond further to this matter."