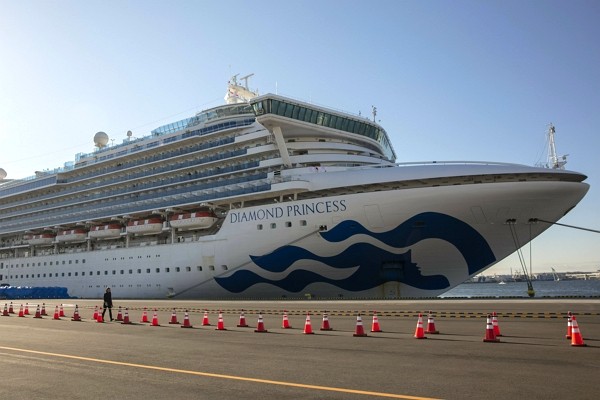 Five Taiwanese nationals on the coronavirus-hit Diamond Princess cruise ship, which has been quarantined in Yokohama Harbor since Feb. 4, have disembarked, according to Taiwan's representative office in Japan.

The five Taiwanese are among the first batch of 500 passengers who were able to leave the ship after the quarantine was lifted Wednesday (Feb. 19).

They were escorted by Taiwanese health officials to a hotel, where they will stay until the remaining Taiwanese passengers disembark and a government charter flight arrives to fly them home, the office said.

The charter flight, originally scheduled for Wednesday, has been pushed back until Friday so that all of the remaining Taiwanese passengers and possibly crew members who test negative for the virus can be brought home on the same flight.

There were originally 24 Taiwanese nationals aboard the Diamond Princess, consisting of 22 passengers and two crew members.

Four of the passengers were diagnosed with the coronavirus and are being treated in Japan, leaving a total of 18, who have all been found coronavirus-free.

Aside from the five who disembarked on Wednesday, the other 13 are set to leave the ship in the next two days.

According to Japan's Ministry of Health, Labour and Welfare, all passengers who have been cleared of the virus will be able to leave the ship by Friday, with the exception of passengers who stayed in the same room as confirmed cases.

Those individuals will have to stay on the ship for an additional 14 days, the ministry said.

Of the two Taiwanese who worked on the ship, one of them, a magician, has been tested for the virus, but the results will not be available until Feb. 21.

There was no word on the other Taiwanese worker's situation, or whether either of them would be able to board the charter flight home.

A Princess Cruises executive said on Sunday that all employees would be put in 14-day quarantine on the ship after the passengers disembarked, but Japanese health authorities indicated Wednesday there may be some flexibility.

They said they will determine together with Princess Cruises if workers who want to get off the ship will be allowed to do so after the passengers have left.

The cruise liner has been in quarantine since Feb. 4, after it emerged on Feb. 2 that a passenger who disembarked in Hong Kong was later diagnosed with the virus.

To date, 542 people among the original 3,711 on board have tested positive for the coronavirus.