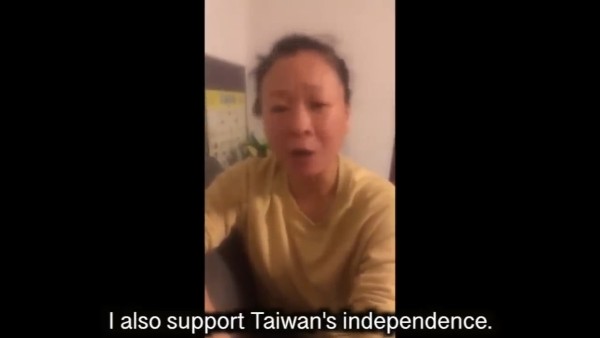 TAIPEI (Taiwan News) — Video surfaced on Sunday (Feb. 15) of a Chinese woman exasperated by Beijing's bungling of the Wuhan coronavirus outbreak, who came out in support of independence for Tibet, Hong Kong, and Taiwan and also called for ordinary Chinese to stand up to the Chinese Communist Party (CCP).

In the opening of the video, the woman addresses her "fellow citizens," saying that ordinary people are being sacrificed by the "schemes and plans of the government." She complains the government does not care about the average person and that no amount of money can buy the necessary medicine and hospital beds needed to treat the deadly virus.

She then proceeds to break every major taboo in the CCP censors' book by expressing her support for independence in Tibet, Hong Kong, and Taiwan. She condemns the "evil deeds of the Chinese Communist Party and the corrupt regime, and evil society," which she says prevents people from speaking freely.

The woman points out that anyone who dares to speak about the reality on the ground in Wuhan is quickly rounded up by the police. She says the solution of the authorities is to take people "to drink tea," a euphemism for police interrogation, followed by detention and adjudication.

She says that those who are sentenced to 10 or 20 years have no recourse and lawyers are "useless." She declares that "all righteous lawyers have been imprisoned by the government."

Increasingly irate, the woman vows that "a sacrifice of blood and flesh is necessary for revolution." She then boldly swears that to enable her parents and family to live freely, she is "standing up" and sacrificing herself.

She acknowledges that such bold words put her in grave danger, but she nevertheless shouts, "I already can't take it anymore! I can't take it anymore!" The woman reiterated that there are no beds or medication for those infected by the virus and claimed that "all the news from TV is a lie."

Livid with rage, the woman calls on her fellow citizens to resist and vows, "We can't be fooled by them anymore." Similar to Hong Kong democracy protesters' concerns about the future of their city, the woman says that people "must stand up for the next generation."

The video then cuts to a black screen that lists the fate of Chinese dissidents who have recently spoken out online. She also called on viewers to protect her and prevent her from suffering a similar fate.