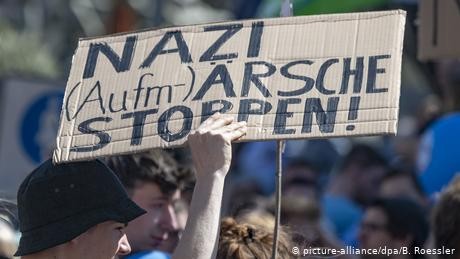 Thousands of people were expected to take to the streets in Erfurt on Saturday to demonstrate against any future political coalitions with the far-right party Alternative for Germany (AfD).

The protest is the latest in the fallout from a controversial vote that saw politician Thomas Kemmerich elected as state premier with votes from the FDP, CDU and AfD —breaking a political taboo in Germany and causing nationwide outrage.

The march was due to start at 1 p.m. local time (1200 UTC) from Erfurt cathedral square and people were expected to join the march from all over Germany. Katja Kipping, leader of left-wing party Die Linke, was expected to attend.

Demonstrators were to be united under the banner of "Not with us — no pact with fascists— never and nowhere."

"The firewall against fascists has a deep rip. Within the FDP and CDU there is the willingness to collaborate with the AfD," said activist group Unteilbar in a statement. The civil society group organized the demonstration together with The German Trade Union Confederation (DGB).

Michael Rudolph, chair of the DGB Hesse-Thuringia branch told German broadcaster MDR that the demonstration will not be the end of the societal protest against the vote.

Anti-fascist counter-demonstrators are also expected to come head-to-head with a far-right march on Saturday in Dresden. Right-wing extremist groups have traditionally co-opted the remembrance day for the allied bombing of Dresden on February 13, 1945 to push a far-right agenda.

The march follows a day of state commemorations for the victims on the 75th anniversary of the bombing of Dresden.