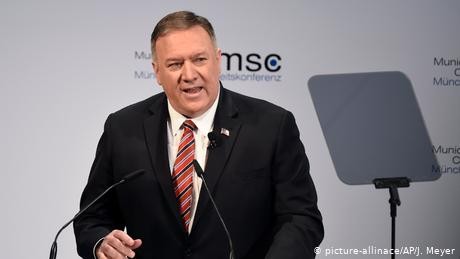 US Secretary of State Mike Pompeo defended against German criticism that the US had retreated from the world stage.

"I'm happy to report that the death of the trans-Atlantic alliance is grossly exaggerated. The West is winning, and we're winning together," Pompeo said in a speech.

"We led 81 nations in the global fight to take out the ISIS caliphate," he said. "Is this an America that rejects the international community?"

Pompeo was responding to comments from German President Frank-Walter Steinmeier who on Friday said the US rejected "even the idea of an international community" and was acting "at the expense of neighbours and partners."

Pompeo slammed Iran for "stifling young Iraqis and Lebanese who want nothing more than a clean and sovereign government."

"When so-called Iranian moderates play the victim, remember their assassination and terror campaigns against innocent Iranian civilians, and right here on European soil itself," he said.

US Secretary of Defense Mark Esper criticized China for "seeking to use emerging technologies to alter the landscape of power and reshape the world in their favor," referring to telecommunications firm Huawei.

"Over time we have watched them seize and militarize islands in the South China Sea and rapidly modernize the armed forces," he said.

He said China is increasingly trying to co-opt state and local officials in the US and around the world, and to influence other countries in the Indo-Pacific region.

"The smaller the country, the heavier the hand of Beijing," Esper said.

He also touched on fear of China's military development. "When it comes to their security gains, we should take the Chinese government at their word. They have said that by 2035, the military intends to complete its modernization, and by 2049, it seeks to dominate Asia as the pre-eminent global military power."

Speaking on ongoing negotiations to facilitate a reduction in violence in Afghanistan, Stoltenberg said that peace must primarily be a result of efforts from within Afghanistan.

"The only lasting solution to the crisis in Afghanistan is an Afghan-owned and Afghan-led peace process," he said in response to questions from DW's Terri Schulz.

"We will only reduce our presence if we see the Taliban is really willing and able to deliver," he said.

Read more: What can we expect from this year's Munich Security Conference?

Qin Gang, China's vice minister of foreign affairs spoke confidently at the conference about his country's ability to contain the coronavirus epidemic.

He predicted that it will be over shortly and only with "short term and temporary" effects on its economy.

"When the epidemic is over, the subdued consumer demand will be released rapidly and the economy will rebound strongly," Qin added.

French President Emmanuel Macron touted the need to invest more heavily in the European economy. "We need to act faster at the European level," he said. "How can we invest faster? We need European initiatives," Macron said, citing the growth of 5G and cloud computing.

"China on the other hand invests enormous amounts of money. It's all public money that's invested. It's not necessarily clear what they're doing ... China is investing in its future and so is the United States. We are not fast enough."

On the sidelines of the conference, Chinese and Vatican foreign ministers met for the first time on Friday. The talks between China's Wang Yi and Archbishop Paul Gallagher came amid improving relations between the two states with no diplomatic ties, following an agreement on the appointment of bishops in 2018.

The Vatican issued a statement saying that the talks were "cordial" and that contact between the two sides had seen "positive developments."