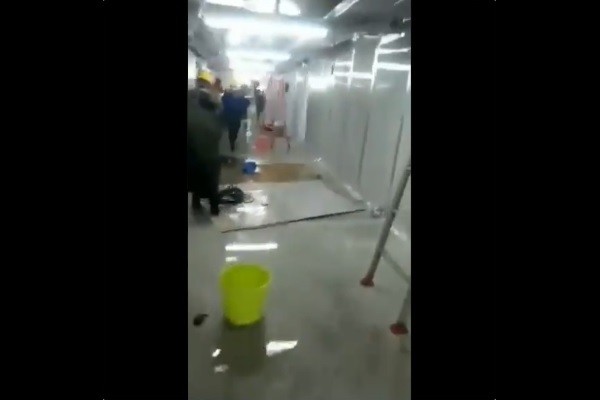 TAIPEI (Taiwan News) — Video has surfaced of the new hospital hastily constructed in Wuhan appearing to be badly leaking water.

On Feb. 3, a mere 11 days after work began, Communist China claimed to have completed the city's Huoshenshan Hospital, built to care for 1,000 of the city's residents infected with the novel coronavirus (COVID-19). The rapid construction of the hospital was widely trumpeted by Chinese state-run mouthpieces, while Western media outlets called it an example of the Chinese Communist Party's (CCP) superior ability to quickly respond to crises.

However, on Saturday (Feb. 15), the dissident group Inty-media uploaded a video on Telegram and Twitter submitted by a Chinese user, allegedly taken from inside the vaunted Huoshenshan Hospital. The caption, written in simplified Chinese characters used in the communist state, reads: "From a netizen, the Chinese Communist Party's ballyhooed 'China speed' Wuhan Huoshenshan Hospital is beginning to leak ..."

In the video, a large puddle of water can be seen in the hallway, with water dripping from the ceiling. Almost comically, just one yellow bucket can be seen capturing the steady indoor downpour, while little thought seems to be given to live electrical wires.

As the person holding the camera continues to move down the hallway of the "finished" hospital, particle boards can be seen strewn on the ground, possibly to serve as "bridges" over the water. Numerous ladders and buckets litter the area, as workers appear to try to fix the leaks and other issues with the hastily built facility.

"What was boasted to be 'China speed,' is more like 'China quality.'"

"They should change the name to 'Water God Mountain Hospital.' Wouldn't that perfectly resolve the problem?"

"Made in China. Synonymous with tofu-dreg projects."

"What next! Newly built Wuhan Coronavirus hospital roof leaking like crazy all over the place! Risk of electrical fires! What else can (go) wrong?"

"The faster they go up, the faster they come down. the hospital that was built within 10 days in Wuhan, has already started leaking water everywhere. talk about cross-infection my friends."

"The 7 days built propaganda hospital in #wuhan shows its true color now. after all its Made in China by Chinese Gov."