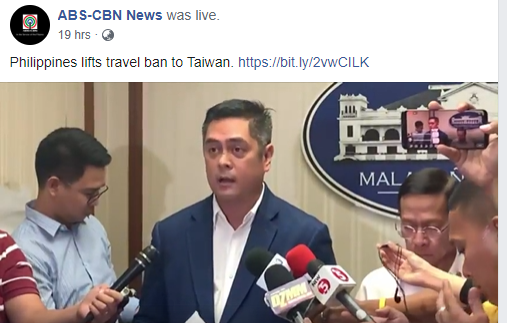 TAIPEI (Taiwan News) – Philippines President Rodrigo Duterte’s approval of a decision to overturn a travel ban on Taiwan motivated by the Wuhan coronavirus (COVID-19) Friday (Feb. 14) might have been motivated by an open letter from more than 400 employees of I-Mei Foods Co., according to reports.

Earlier, President Tsai Ing-wen (蔡英文) described a travel ban motivated by Chinese insistence on a “One China policy” as “unacceptable.”

Officially, a Filipino government task force decided to lift the travel ban between the two countries due to Taiwan’s efficient handling of the virus crisis, but TV station ABS-CBN said that the letter to President Duterte by the Filipino I-Mei employees was likely to have influenced his decision.

The workers emphasized they might be unable to fulfill their contracts if travel between the two countries became impossible. Some employees at the end of their contract might want to go home to be replaced by a new group of staff, the report said.

I-Mei Foods Chairman Henry Kao (高志尚) said the action of the workers was purely spontaneous, and he had not been aware beforehand of their plan to write a letter, which he said showed their dedication to Taiwan.

The food company was the only major business on the island to import workers from the Philippines directly without the use of labor brokers, the Liberty Times quoted Kao as saying. Migrant workers have called for the abolition of the broker system, as it saddles many of them with high debt, neutralizing the effect of higher wages in Taiwan.

I-Mei went straight to the southern Philippines island of Mindanao, President Duterte’s home region, to recruit some of its workers and also paid their plane tickets to Taiwan.

Almost 160,000 Filipinos live and work in Taiwan. The island’s government had mentioned the possibility of sanctions, such as the ending of a visa waiver and a search for foreign workers in other countries, if Manila were to maintain the travel ban.