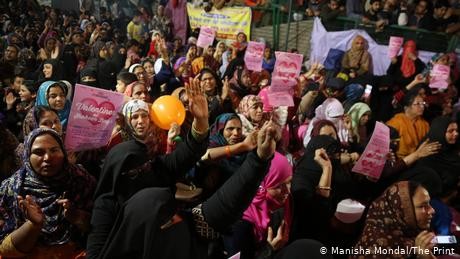 A group of New Delhi protesters against India's citizenship law on Thursday invited Prime Minister Narendra Modi to visit them in the city's Shaheen Bagh neighborhood, which is seen as the epicenter of the movement against the controversial legislation.

The female protesters invited Modi as part of their latest social media campaign #TumKabAaoge, meaning "when will you come." The campaign, which started last month, began as a bid to draw the government's attention to their demands and has since gained considerable traction on the internet.

The protest, spearheaded by a group of local women, featured a musical performance by an amateur band on the eve of Valentine's Day. The women raised slogans against the citizenship law and held up posters of "Valentine's Day at Shahneen Bagh" inviting Modi to "celebrate the festival of love, together." The protesters also held up a "surprise gift" for Modi, a big red teddy bear, and placards asking him to visit them.

Valentine's Day isn't as popular a commercial holiday in India as it is in the West, and has often been violently opposed by right-wing groups who call it a foreign phenomenon not in line with what they call traditional Indian values.

"We don’t necessarily want Modi to come, but rather hear our voices and address our concerns," Abid Sheikh, one of the protesters in Shaheen Bagh told DW.

Shaheen Bagh is a predominantly Muslim middle-class locality in India's capital city where local women have been continuously protesting against the Citizenship Amendment Act since December 15, days after the law was passed by the Indian parliament. With the protests marking the 60th consecutive day on Friday, Shaheen Bagh is the site of is the longest continuous protest against the controversial law.

"Whether Modi or Amit Shah or anyone else, they can come and talk to us. If they can convince us that whatever is happening is not against the Constitution, we will end this protest," one of the activists, Syed Taseer Ahmed told news agency Press Trust of India.

Interior Minister Amit Shah, one of Modi's most trusted aides, on Thursday said he would be willing to answer all questions on the citizenship law.

"Anyone who wants to discuss issues related to CAA with me can seek time from my office; they will be allotted time within three days," Shah said at a media summit. "Everyone has the right to protest peacefully," he added.

Some members of Modi's Hindu nationalist Bharatiya Janata Party have taken a hostile stand against these protesters, and targeted them during the Delhi election campaign. Anurag Thakur, a BJP member of Parliament, had referred to people who protested the citizenship law as the "country's traitors," and prompted crowds to chant back "shoot them."

The Citizenship Amendment Act or CAA fast tracks citizenship for non-Muslim refugees from Bangladesh, Afghanistan and Pakistan who arrived in India before 2015. Critics of the law consider it to be discriminatory against Muslims as it makes religion a test for citizenship.