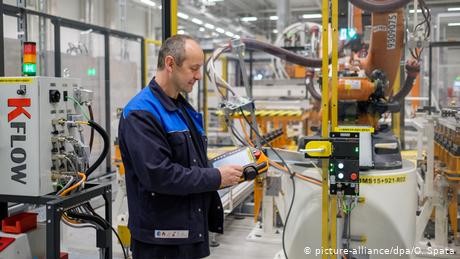 The German economy posted zero growth in the final quarter of 2019, the federal statistics authority (Destasis) reported in preliminary statistics on Friday.

The Gross domestic product (GDP) was the same in October-December as in the previous three months.

Read more: Cash-strapped governments a thing of the past?

The results were worse than forecast, with predictions of 0.1% growth.

However, Destastis revised its results for the third quarter, with the GDO growing by 0.2% instead of the 0.1% previously reported.

The overall economic stagnation in the fourth quarter is already a small success," Dr. Fritzi Koehler-Geib, chief economist at KfW banking group told AFP news agency, adding that Germany would have to wait until spring to see signs of recovery.

Read more: US businesses less willing to invest in Germany​​​​​​​

"At least for the first quarter, there are signs of a noticeable slowdown in the Chinese, and thus also the global economy as a consequence of the coronavirus."