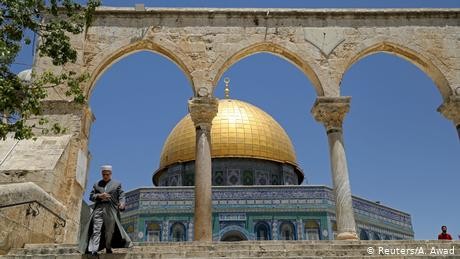 In light of US President Donald Trump unveiling of his Middle East peace plan in January, the European Union's foreign policy chief, Josep Borrell, said the bloc needs to formulate a European initiative to facilitate the peace process between Israelis and Palestinians.

"I would like to talk to the EU foreign ministers about what ideas the Europeans have and what initiative we could take to move the peace process between Israel and the Palestinians forward," Borrell said in an interview with German newspaper Die Welt on Friday.

However, he acknowledged that the bloc was far from united on the Middle East peace process, and both Israelis and Palestinians would have to accept the EU as mediators. "All this will be difficult, but it is not impossible," Borrell said.

"This would be contrary to international law and UN Security Council resolutions," Borrell said. "It is not enough for the plan to be agreed with one country on the acquisition of new territories."

Borrell reiterated that the EU is in favor of a two-state solution with an equivalent exchange of Israeli and Palestinian land. He said, from the EU's point of view, the goal must be for Israel and an independent, democratic and viable state of Palestine to live side by side and in mutual recognition.

Trump hailed his proposed solution as "the deal of the century," but the plan received a largely lukewarm response in Europe. Palestinian leaders rejected the US proposal both prior to and after its unveiling.

Palestinians are seeking an independent state, demanding all territories seized during the 1967 Six-Day War, including East Jerusalem and the West Bank. They also want 700,000 Israeli settlers to leave from these regions.