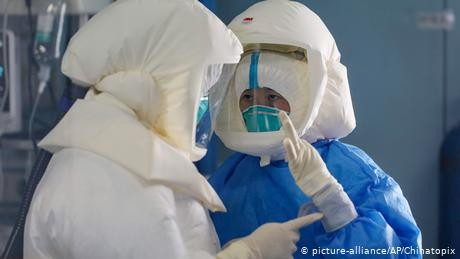 The death toll from a coronavirus outbreak in China's Hubei province has risen by 116, bringing the total death toll to 1,483, the province's health commission said Friday.

Of the new deaths, 88 occurred in Wuhan, the province's capital where the COVID-19 virus is believed to have originated late last year.

The commission reported 4,823 new cases in Hubei, taking the total number of cases in the province to 51,986. More than 80% of the new cases were in Wuhan. Chinese officials on Friday said there were 5,090 news cases in mainland China.

The increase in cases comes after 242 deaths and 14,000 new cases on Thursday after the commission began counting cases diagnosed through new clinical methods. There are currently several hundred coronavirus cases in 27 countries outside of China.

German Health Minister Jens Spahn told DW that within the European detection and containment of the virus was working.

"So far it's just a regional epidemic outbreak in China, but we need to be sure that it does not become a real epidemic or a pandemic worldwide," Spahn said.

Yanzhong Huang, a senior fellow for global health at the Council on Foreign Relations in the United States, told DW that he expects new cases of coronavirus to drop between late April and early May.

Meanwhile, in Cambodia, hundreds of passengers disembarked from the Westerdam cruise ship, which had been stranded at sea over fears its passengers were infected with the virus.

The Holland America Line-operated ship received permission to dock at the port of Sihanoukville on Thursday after Thailand, Japan, Taiwan, the Philippines and Guam turned the ship away earlier.

The Westerdam, carrying 1,455 passengers and 802 crew members, began its voyage in Singapore in January. Its last stop before it was refused further landings was in Hong Kong, where 53 cases of the virus and one death had been confirmed.

It was denied port after some 20 passengers were tested for the COVID-19 viral illness after they reported stomach aches. The tests done at the Pasteur Institute in Phnom Penh showed none had the virus.

Unlike many Asian nations, Cambodia has not banned direct flights to China. Sen said that a halt in service would damage bilateral relations between the two countries.