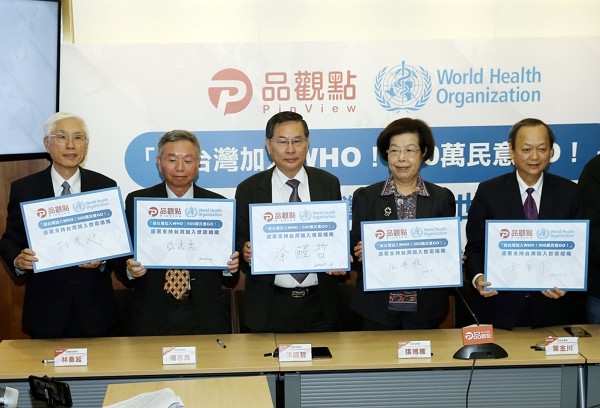 A cross-party group of five former Taiwanese health ministers on Thursday (Feb. 13) urged the public to support a petition calling for Taiwan's admission to the World Health Organization (WHO).

Chang, who oversaw the introduction of Taiwan's national health insurance program in 1995, said the WHO should remain focused on issues of public health, and not allow itself to become politicized, especially amid a global outbreak of the novel coronavirus (COVID-19).

"Taiwan should be a member of the WHO, or at the very least an observer in the World Health Assembly," she said, referring to the WHO's governing body.

Lin, who served in the administration of former president Ma Ying-jeou (馬英九), called representation in the WHO a matter of basic rights, adding that Taiwan has much to contribute to developing countries in terms of healthcare-related experience and expertise.

"It shouldn't take a tragedy" such as a global health threat for Taiwan to be admitted to the health agency, he said.

Nevertheless, Lin said he gave a "98 percent" score to the government's response to the coronavirus, noting that major improvements have been made since the 2003 severe acute respiratory syndrome (SARS) outbreak, which claimed the lives of 73 Taiwanese, including 11 healthcare workers.

The petition, which was launched last week by the news website PinView, runs through May 31.