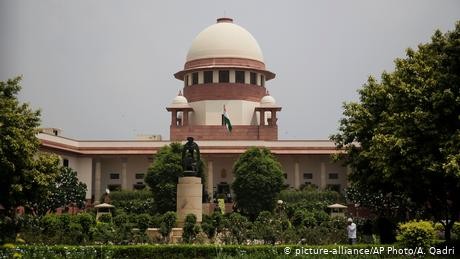 The Supreme Court of India on Thursday ruled that political parties should publish details of criminal proceedings against their candidates on websites and social media accounts before polls.

The apex court of the country also ruled that the parties should be able to justify choosing a person with criminal records, local news networks reported.

The court ruling comes in response to a contempt petition filed by lawyer Ashwini Upadhyay and others after no significant action was taken in response to an older judgement.

"This is a landmark judgement," Upadhyay told DW. "It will not just act as a moral barrier, but also help in reducing hate speech, which has become a common tool for gaining attention during the run-up to elections. This may be a step towards bringing decency back into politics in our country."

Read more: Delhi election losses: The beginning of the end for PM Modi?

This comes soon after the Delhi legislative assembly elections were held, where some highly-polarizing instances of hate speech and mud-slinging were recorded across the Indian capital. According to the Association for Democratic Reforms (ADR), 43% of the candidates elected in India's 2019 general election had faced criminal charges. Close to 30% of the winners had criminal records including serious crimes such as kidnapping, rape, murder, attempt to murder and others, a report by the non-governmental organization stated.

The supreme court expressed concern over an increased "criminalization of politics" over the past four general elections in the country, as it announced that "winnability” could not be the only factor taken into consideration by parties while choosing candidates to field in elections. The details of pending cases and the criminal history of each candidate should be up on the party's website and social media accounts, as well as in newspapers, within 48 hours of the announcement, the court added.

There is, however, some disappointment from organizations that believe that these measures aren't enough.

"We are not satisfied with today's judgement," Maj Gen Anil Verma, head of ADR India, told DW. "The objective is to ensure that political parties do not field candidates whose money and muscle power can help them win elections despite criminal charges. Simply asking for a justification is not enough."

As a part of the judgement, the bench said that all details of compliance have to be reported to the Election Commission within 72 hours, beyond which failure to do so will be considered contempt of court. In such a case, the court may hold the president of the party liable. If such directives are not followed, there is even a chance of the party being de-registered.

The Indian judiciary and civil society have made numerous attempts to move against increased criminalization in the political realm. A recent example would be a 2018 verdict that asked the country's parliament to devise legislation to push political parties into not choosing candidates with criminal records.

Earlier this week, the Delhi assembly elections saw a big jump in winning candidates with declared criminal cases. While 34% of the winners faced criminal charges in the last elections, the 2020 assembly has 43 winners - 61% - with criminal cases, according to a new report by ADR.