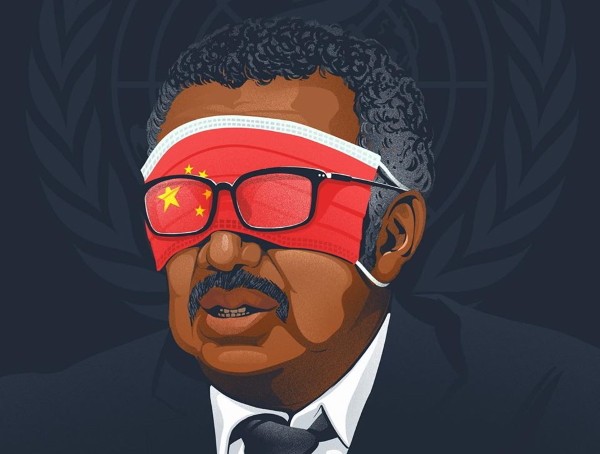 TAIPEI (Taiwan News) — World Health Organization (WHO) Director-General Tedros Adhanom Ghebreyesus continues to praise Communist China's handling of the Wuhan virus even as infections and deaths skyrocket, so a Hong Kong illustrator has responded with a cartoon mocking the Ethiopian leader's blind faith in Beijing.

Since the Wuhan virus epidemic erupted in January, WHO and Adhanom have been heavily criticized for showing more concern about protecting China's image than tackling the disease. The organization has been lambasted for being slow to declare the outbreak a global health crisis and refusing to admit Taiwan as a member.

On Feb. 4, Eric Chow (Instagram @ericwychow), a 31-year-old illustrator from Hong Kong, posted on his Facebook page an image of Adhanom speaking, with a surgical mask bearing the design and colors of the flag of the Chinese Communist Party (CCP) over of his eyes, while wearing his glasses on the outside of the mask. In his Facebook post, Chow points out that after WHO praised China's transparency for stopping the spread of the virus, it actually spread further, so Chow criticizes the organization for a lack of transparency and being untrustworthy.

When asked what his inspiration for the illustration was, Chow told Taiwan News: "The WHO is very disappointing. They don't even dare to criticize China for covering up the outbreak." The top comments by Chow's fans echoed his sentiments about the extent to which WHO has become beholden to Beijing:

"Add some RMB cash note (in) the background, it'll be much more persuasive."

"This guy turned the acronym WHO into the Wuhan Health Organization."