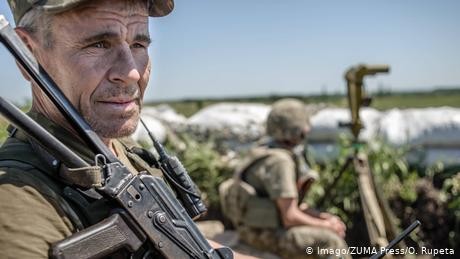 Five years ago the Minsk Protocol — also known as Minsk-2 — was signed on February 12 to bring the fighting in Ukraine's eastern Donbass region to a halt. The peace agreement's 13 terms, however, were never properly implemented.

To this day, fighting continues to rage in the Donbass region. While the advance of Russian-backed separatists came to a standstill, Ukrainian forces and separatists continue to engage in limited trench warfare at flashpoints along the former frontline. And the clashes go largely unnoticed by international media.

Minsk-2 followed the Minsk-1 agreement, which was negotiated in September 2014. Talks got underway after Russian-backed separatists launched an offensive that could have led to the encirclement of Debaltseve, a strategically important transport hub between the cities of Donetsk and Luhansk.

German Chancellor Angela Merkel and the French president at the time, Francois Hollande, had traveled to Kyiv and Moscow for emergency talks, and subsequently to Minsk, the capital of Belarus. This is where, after 16 hours of negotiations, both leaders hammered out the Minsk peace plan together with Ukraine's then-President Petro Poroshenko and his Russian counterpart Vladimir Putin. Shortly afterward, Merkel expressed cautious optimism by saying there was a "glimmer of hope."

In the three days between the ratification and implementation of the treaty, however, Russian-backed separatists took the city of Debaltseve.

While Russia chalked up Minsk-2 as a diplomatic victory, Ukrainians were more skeptical, and not sure what improvements the agreement would bring forward. They feared that the deal would grant separatists far-reaching autonomy and allow them to deepen their ties with Russia. This, it was feared, would strip Kiyv of any political say in the Donbass — yet leave it to foot the bill.

Ukraine's then-president, Poroshenko, was loathe to make any political concessions to the separatists without a proper ceasefire. The consequence was that the Minsk-2 deal was never fully implemented. But Poroshenko's successor, Volodymyr Zelenskiy, has now set his sights on finally implementing the peace agreement.

In 2019, progress was made on several fronts. A gradual troop drawdown occurred in three locations across eastern Ukraine. And two prisoners swaps were carried out: one in September involving Russia, another in December with the so-called Donetsk People's Republic and Luhansk People's Republic — neither of which are internationally recognized.

In the meantime, Kyiv agreed to Russia's political demands and the 2015 Steinmeier formula, named after Germany's then-foreign minister, Frank-Walter Steinmeier. Steinmeier's formula suggests incremental steps whereby Donetsk and Luhansk regions could gradually acquire special status. A key issue in this context remains how to hold local elections in these separatist-controlled regions. Kyiv's agreement to this step, meanwhile, sparked street protests across the country, with some decrying the move as a capitulation.

In early December 2019, the leaders of Ukraine, Russia, Germany and France gathered in Paris to revive the Minsk-2 peace process. The parties reiterated their commitment to the agreement, new targets and deadlines were set, including the goal to reach a ceasefire and carry out a prisoners swap until the end of 2019. Fighting, however, still continues in the region today — and it is unclear whether a permanent peace deal will ever be reached.

A new agreement, a kind of Minsk-3 deal, does not look likely. Russia is not interested in Kyiv's new demands, such as the desire to regain control over its 400-kilometer eastern border with Russia. Ukraine's President Volodymyr Zelenskiy has said only then would he agree to local elections in the separatist-controlled regions, which would most likely be held in autumn 2020. Speaking to Ukraine's Interfax news agency on Tuesday, however, the Ukrainian leader said that he believes Russia is ready to think about Kyiv's demands.

As long as Minsk-2 remains unfulfilled, the EU will uphold its sanctions against Russia — a move that many Western countries have backed. What is not clear, at this stage, is whether the sanctions regime will be amended if changes are made to the peace agreement.