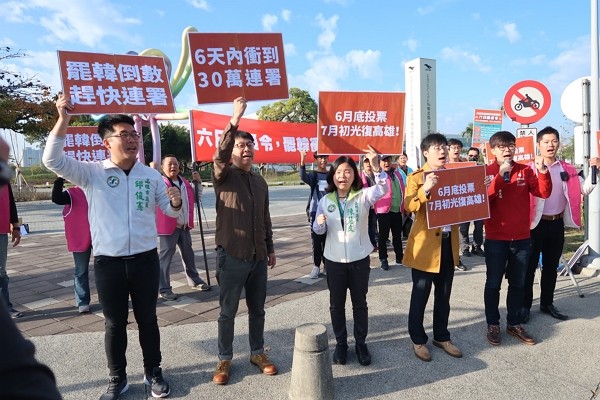 TAIPEI (Taiwan News) — WeCare Kaohsiung, organizer of the recall campaign against Kaohsiung City Mayor Han Kuo-yu (韓國瑜), said Wednesday (Feb. 12) that it has received 230,753 signatures, which is sufficient for the petition to proceed to a public vote.

During an event in the southern port city Wednesday morning, the petition's lead organizer Chen Kuan-jung (陳冠榮), Wecare Kaohsiung founder Aaron Yin (尹立), and Taiwan Statebuilding Party News Department deputy director Chang Po-yang (張博洋) said that they already have enough signatures to clear the second hurdle. However, they want to garner at least 300,000 signatures by next week in case some are rejected.

According to the Civil Servants Election and Recall Act, the petition must be signed by 10 percent of the total eligible electorate: 228,000 people. Chen urged the Kaohsiung citizens to exercise their rights and stand up against Han, who has put his own interests before his citizens'.

Yin told the media that the Kuomintang (KMT)-run Kaohsiung government has attempted much political skulduggery over the last two years, and it is highly likely that the election committee will try to invalidate the petition. He said that if all goes well, the recall vote is expected to take place in June, reported CNA.

During a political talk show Monday (Feb. 10), Democratic Progressive Party (DPP) Taipei City councilman Wang Shih-Cheng (王世堅) said that he worries the dreaded Wuhan coronavirus outbreak has made Kaohsiung citizens forget about Han's misdeeds. He added that although Taiwanese people are kind, but they must not forgive Han for his empty promises to voters, reported Storm Media.