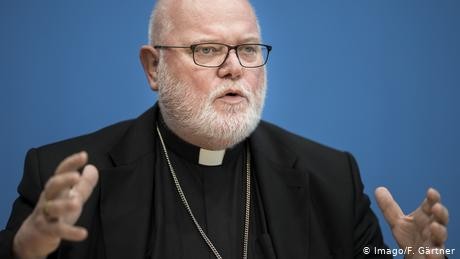 The head of the German Bishops' Conference (Deutsche Bischofskonferenz), Reinhard Marx, is to leave the role next month, the organization announced on Tuesday.

The governing body of the Catholic Church in Germany, which convenes bishops from all the archdioceses, said Marx would not seek re-election at its general assembly next month.

In a letter to German bishops, 66-year-old Marx said that his advancing age was a driving force behind his decision to step down and not seek a second term. He had been elevated to the position of Cardinal by his countryman, another former Archbishop of Munich and Friesing, former Pope Benedict XVI.

"My thinking is that I would be 72 years old at the end of a theoretical second term, and then the end of my responsibilities as Archbishop of Munich and Freising will be near," Marx wrote. "I think it should be the turn of the younger generation and perhaps it is good if this role changes hands more frequently in future."

The cardinal has been a central figure in efforts to modernize the Catholic Church in Germany, particularly on the topics of sex and relationships, with women's role in the clergy and celibacy among the issues up for discussion. As yet though, the ongoing, two-year "synodal path" (Synodaler Weg) initiative is yet to produce much in the way of reforms or changes, having only convened for its first major gathering last month.

Marx said that he would continue to engage with the reform process in particular.

The progressive group "Wir sind Kirche" (We Are Church) called for Marx's successor to also pursue the issue. "This coming change can in no way be allowed to threaten this 'synodal path' reform process which has just begun and was so laborious to initiate. It must continue with the same openness on show at the first synodal conference."

The group also thanked Marx specifically for advancing the reform process, "which is urgently needed given the sluggish resolution of historic sexual violence" in the church.

There was both understanding and gratitude at the news of Marx's resignation from the church.

The Archbishop of Bamberg, Ludwig Schick, said: "He gave his best."

Bishop Ulrich Neymeyr from Erfurt said that Marx represented the Bishops' Conference very well "in anything but simple times."

The Central Committee of German Catholics (ZDK) took Marx's decision "with great regret and with the utmost respect." Marx has "done a great job in regaining trust and credibility in the Catholic Church and that he "embodied the hope of a new image of the Church in Germany," said ZDK President Thomas Sternberg.

The cardinal was recently criticized by political party Alternative for Germany (AfD) over his decision to donate €50,000 ($55,000) of Church community funds to a sea rescue charity.