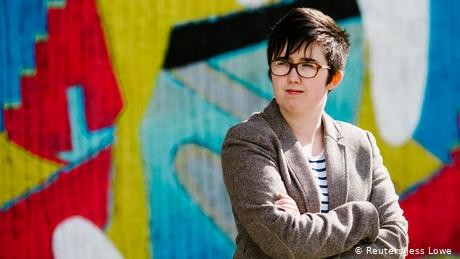 Police officers in Northern Ireland on Tuesday arrested four men as part of the probe into the murder of Lyra McKee, a 29-year-old journalist who was shot dead by a New IRA gunman last year.

The men were arrested in Derry-Londonderry under the Terrorism Act over the April shooting that was claimed by Irish nationalist militants opposed to the 1998 Good Friday Agreement that ended a three-decade sectarian conflict known as "The Troubles."

The Police Service of Northern Ireland (PSNI) renewed an appeal for information on the deadly shooting.

"I have always believed that some people within the community know what happened and who was involved," Detective Superintendent Jason Murphy said.

McKee wrote about growing up gay in Northern Ireland as well as chronicling the experiences of the "cease-fire babies," the generation raised after the 1998 peace deal.

McKee was an advocate for LGBT rights and was recognized as a rising star in journalism, having landed a spot on Forbes Magazine's "30 under 30 in media" list in 2016.

"Such a warm and innocent heart, she was the greatest listener, someone who had time for everyone," her family said in a statement. "She was a smart, strong-minded woman who believed passionately in inclusivity, justice and truth."

"In the course of attacking the enemy, Lyra McKee was tragically killed while standing beside enemy forces," the New IRA said after the shooting, a reference to McKee standing close to a police riot vehicle at the time, claiming that they had not intended to shoot her. "The IRA offer our full and sincere apologies to the partner, family and friends of Lyra McKee for her death."

At the time of her murder, Northern Ireland's devolved parliament had been suspended since January 2017 after a breakdown of trust between rival political parties.

The power-sharing assembly in Belfast was created in 1998 after the signing of the Good Friday Agreement. McKee's death led to calls for politicians to agree to restore the legislature. It eventually resumed sitting last month.

Read more: Northern Ireland will have a government after three-year gap