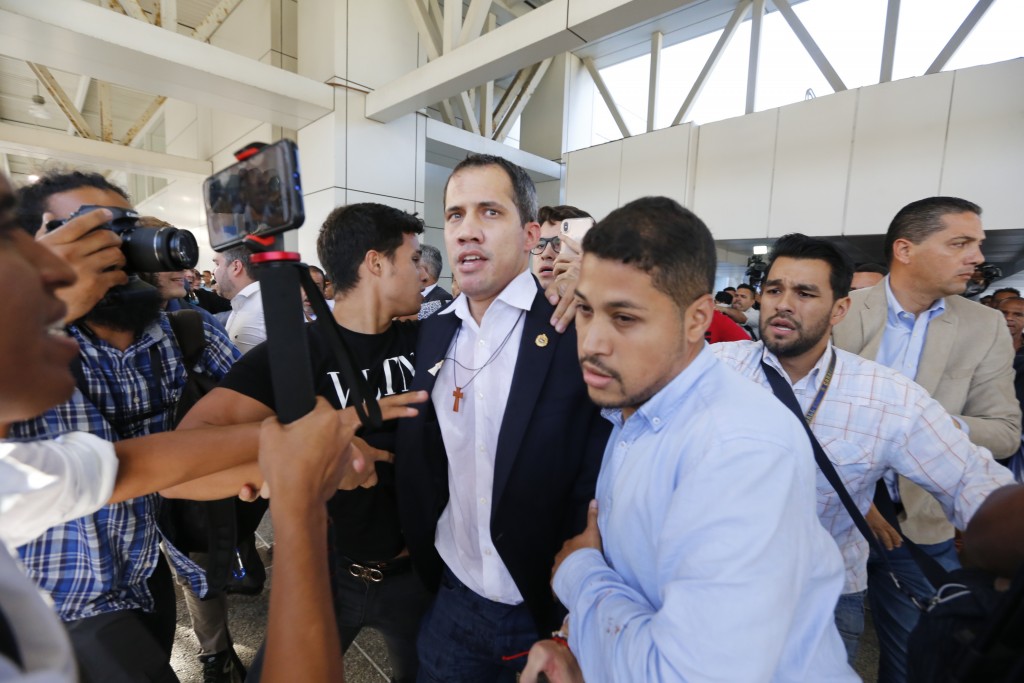 CARACAS, Venezuela (AP) — Venezuelan opposition leader Juan Guaidó appeared to have breezed through security at an airport near Caracas on Tuesday, returning home without incident from a risky international tour that included a White House meeting with President Donald Trump.

Guaido walked from the international airport on the outskirts of the capital pumping his right hand over his head. Outside the airport, less friendly crowds awaited him.

“Dirty traitor!” and “Get out!” they shouted as an SUV whisked him away. Guaidó backers shouted his name in support: “Guaidó! Guaidó!”

“I’m bringing with me the commitment of the free world willing to help us recover democracy and Freedom,” Guaidó said on Twitter. “We begin a new moment.”

The return has raised questions about how Guaidó will use his redoubled backing in Washington, returning from an international tour that included a meeting with U.S. President Donald Trump.

Guaidó left Venezuela in mid-January, defying a travel ban ordered by the government-friendly supreme court that put his safe return in jeopardy.

He set out on the trip looking to shore up support for the campaign to overthrow socialist President Nicolás Maduro as a way to end Venezuela's crisis.

While away, Guaidó also met with leaders in Europe, urging them to continue their support for him. Officials in the Trump administration have said they are considering ways to exert more pressure to force out Maduro.

Guaidó is urging Venezuelans to remain unified and to take the streets again, demonstrating their will to end the socialist government that the opposition leaders calls a “dictatorship.”

Opposition lawmakers who met him at the airport said they were heading to a public square in Caracas.