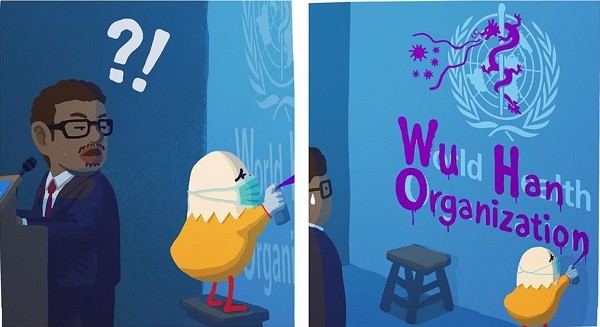 TAIPEI (Taiwan News) — After the World Health Organization (WHO) announced that it was changing the official name of the Wuhan virus to avoid offending China, a Hong Kong illustrator created a cartoon mocking the move.

On Monday (Feb. 10), Hong Kong comic artist Ah To posted a cartoon on Instagram mocking the WHO's decision to change the name of the Wuhan coronavirus to novel coronavirus (2019-nCoV) to avoid linking the disease to China, despite the fact that that is where the outbreak actually began. In the first frame, WHO Director-General Tedros Adhanom Ghebreyesus is seen speaking and holding up a piece of paper.

In the second frame, the name "Wuhan" have been crossed out and replaced with the word "Novel." Similarly, in Chinese, the characters for "Wuhan" (武漢) have been replaced with "new corona" (新冠).

In the third slide, Adhanom appears perplexed as he looks at a chick wearing a surgical face mask and spraying graffiti on the wall behind him. The final frame reveals that the chick had scrawled the words "Wu Han Organization" over the "World Health Organization" logo.

The WHO and Adhanom have been heavily criticized for showing more concern about protecting Communist China's image than honestly tackling the disease. The organization has been lambasted for being slow to declare the outbreak a global health crisis, praising Chinese prowess in coping with the virus, and refusing to admit Taiwan as a member.