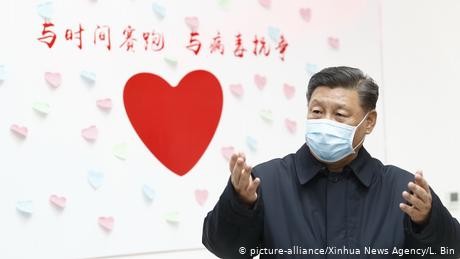 The death toll from the coronavirus outbreak in China topped 1,000 on Tuesday, as the World Health Organization (WHO) warned that the human race must not let the epidemic get out of control.

Hubei province, the epicenter of the outbreak, reported another 103 deaths, bringing the total number of deaths in mainland China to 1,011, in the highest single-day toll since the virus began to spread.

There are now over 42,000 confirmed cases in China as well as 319 cases in 24 other countries, including one death, according to the WHO and Chinese health officials.

Chinese President Xi Jinping called for more "decisive" measures to tackle the outbreak, in a visit to a frontline hospital in Beijing. Xi wore a face mask and had his temperature checked while visiting medical workers and patients affected by the outbreak. He also said the situation was still "very grave," according to state broadcaster CCTV.

Read more:Coronavirus: From bats to pangolins, how do viruses reach us?

Meanwhile, the Diamond Princess cruise ship, holding over 3,700 passengers and crew on board, was still quarantined in the Japanese port of Yokohama, with an additional 65 cases reported. The number of confirmed cases on the vessel is now up to 135.