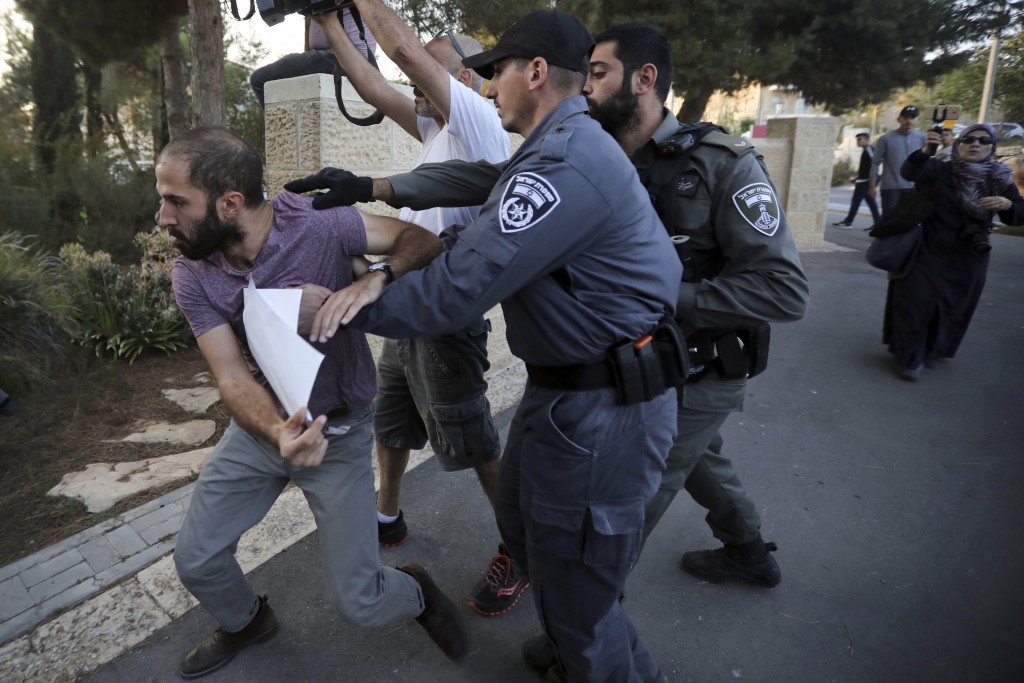 RAMALLAH, West Bank (AP) — One of the men was hospitalized with kidney failure and 11 broken ribs. Another was nearly unrecognizable to his wife when he was wheeled into a courtroom. A third was stitched up after being attacked by a security dog.

Then the three Palestinians were returned to their Israeli interrogators. They had been swept up in a sprawling manhunt launched after a roadside bomb killed a 17-year-old Israeli girl and wounded her father and brother as they hiked down to a spring last August in the occupied West Bank.

The attack raised fears of a sophisticated militant cell that might strike again, and Israeli interrogators appear to have treated it as a ticking time-bomb scenario. Israeli and Palestinian rights groups say there is strong evidence that they tortured several detainees in violation of Israeli and international law.

The allegations against Israel are the most serious to come to light in years, and the rights groups say they point to a loosening of constraints two decades after the Israeli Supreme Court outlawed most forms of torture.

Lawyers and family members of the three main suspects say they were tortured to the point of being hospitalized. Several other Palestinians swept up by Israel's Shin Bet internal security agency say they were threatened, beaten, forced into painful stress positions and denied sleep.

A landmark 1999 Israeli Supreme Court ruling forbids such torture. But the law allows interrogators to defend the use of force when there is fear of an imminent attack.

Rights groups say interrogators routinely make use of the loophole, knowing they will face few consequences, if any.

The Public Committee Against Torture in Israel says more than 1,200 complaints against the Shin Bet have been filed since 2001, without a single case going to trial. Only one criminal investigation has been launched, over a 2017 case involving alleged rape, and it is still open.

The allegations come at a sensitive time following the release of President Donald Trump's Mideast initiative, which heavily favors Israel and would allow it to annex large parts of the West Bank. The Palestinians have rejected the plan, and sporadic clashes have erupted across the West Bank in recent days.

The Western-backed Palestinian Authority, which has also been accused of torturing prisoners, has responded to the plan by threatening to end its longtime security coordination with Israel, which many Palestinians view as an extension of the occupation. The latest torture allegations could add to the mounting pressure on President Mahmoud Abbas to follow through on those threats.

The Shin Bet launched a massive manhunt after the Aug. 23 bombing killed 17-year-old Rina Shnerb and seriously wounded her father and older brother. Such bombings, a hallmark of the 2000-2005 Palestinian uprising, have been rare in recent years.

Authorities blamed the attack on the Popular Front for the Liberation of Palestine, or PFLP, a leftist political party that has an armed wing. In the following weeks, security forces arrested dozens of its members — suspected militants as well as politicians and student leaders.

The 2.5 million Palestinians in the West Bank live under Israeli military rule, and detainees can be held for months or years without charge under a practice known as administrative detention. Israel says such measures are needed to prevent attacks without disclosing sensitive intelligence.

The Shin Bet identified 44-year-old Samer Arbeed as the mastermind of the attack and the bombmaker. It said Qassem Barghouti, 22, took part in the bombing and other attacks, and that Walid Hanatsheh, 51, was a senior commander in the group's armed wing.

The Shin Bet, also known as the Israeli Security Agency, said the interrogations helped foil attacks planned for the “near future” and led authorities to several weapons caches.

The agency declined to address specific allegations of torture, saying only that “interrogations are conducted in accordance with the law and are aimed at protecting the State of Israel and its citizens from terror attacks.”

In September, days after his arrest, Arbeed was taken to a hospital in critical condition.

Sahar Francis, the head of the Palestinian Addameer rights group and a lawyer for the suspects, said Arbeed's interrogators beat him for 36 hours, leaving him with kidney failure and 11 broken ribs. He was hospitalized and required a respirator after developing pneumonia. He was released from the hospital after three weeks and returned to Shin Bet custody.

The Shin Bet said at the time that Arbeed “did not feel well” during interrogation and was taken to a hospital, without elaborating. Israeli media said the Justice Ministry was investigating. The ministry did not respond to requests for comment.

While Arbeed's hospitalization was widely reported at the time, Francis said his alleged co-conspirators, Barghouti and Hanatsheh, were also severely beaten.

Hanatsheh's wife, Bayan, said she hardly recognized him when she saw him 60 days after his arrest.

“He was brought into court in a wheelchair," she said. “He looked very old, his beard was plucked from several places and his eyes were deep inside his head. He was not himself,” she said.

Francis shared photos of Hanatsheh she said were taken 10 days after his interrogation. They appeared to show large red bruises on his legs, feet and shoulders.

Barghouti, the third alleged attacker, was bitten in his genitals by a security dog when authorities raided his home near the West Bank city of Ramallah, Francis said.

“When he was brought back from the hospital for interrogation, the interrogators hit him on his wounds,” she said. At one point during his interrogation, he urinated in his pants because he was not permitted to use the bathroom, she added.

Rachel Stroumsa, the executive director of the Public Committee Against Torture in Israel, said the allegations are “very credible” and line up with the testimony her group has gathered from other detainees over the years.

“Somebody who is in good health is arrested and ends up two days later in hospital, incubated, on dialysis, with broken ribs," she said. "It’s extraordinarily difficult for me to see how you could give it any other explanation than a severe suspicion of torture.”

THE EXPERIENCE ‘NEVER LEAVES YOU’

Addameer says several other suspects were subjected to less severe forms of abuse that the human rights community widely views as torture. It said a total of around 50 Palestinians were subjected to some form of torture in the wake of the bombing.

George Abu Ghazaleh, a 29-year-old who works at a music production company and teaches traditional dance, was arrested at his home on Nov. 11 and taken away in his pajamas and slippers. He said that for weeks he was isolated in a filthy cell, beaten and screamed at.

“I was asked about acquaintances and about people that I don’t even know," he said. "I struggled to convince them that I have no ties whatsoever to any of these people.”

He said he was held for several hours at a time with his arms and legs cuffed to a chair in the so-called Shabach position — a practice specifically outlawed by the Supreme Court.

He was released after 40 days without being charged but says he's still traumatized.

“This kind of experience never leaves you," he said. He describes feeling distracted much of the time and says he wakes up at night to the slightest sound outside his window.

Addameer said the Shin Bet also arrested family members of the alleged militants — mostly women — to put pressure on them.

It says Hanatsheh's 21-year-old daughter was held for two days and paraded before her father in detention. Authorities also detained Barghouti's mother, who teaches media studies at Birzeit University, holding her for two weeks.

The Shin Bet also rounded up university students with alleged ties to the PFLP. Mays Abu Ghush, 22, was also subjected to Shabach over the course of 30 days of interrogations, according to Francis, who is also representing her.

SANCTIONED AT THE ‘HIGHEST LEVELS’

Stroumsa said the “necessity defense” allowed by the Supreme Court was never intended to sanction any form of torture but to allow interrogators to defend themselves if they strayed into gray areas.

“Torture is forbidden absolutely," she said. "There are things we do not do. We don’t rape. We don’t enslave people. We don’t torture. That’s a moral code. It’s also a legal code which Israel is bound to.”

She said the necessity defense is now agreed upon before interrogations, and is often sanctioned “at the highest levels,” by the head of the Shin Bet or the attorney general.

Her group has recorded a “sharp increase” in reports of torture over the last three months.

The Shin Bet declined to comment on when or how the necessity defense is employed.

The Palestinian Authority, which has limited autonomy in parts of the West Bank, and the Islamic militant group Hamas, which rules Gaza, have also been accused of torturing political prisoners. Rights groups say torture is endemic in other countries in the region, such as Syria and Egypt.

Unlike those countries, Israel routinely portrays itself as the region's sole democracy and extolls the morality of its security forces.

In December, Prime Minister Benjamin Netanyahu commended the Shin Bet, the army and police for apprehending the “reprehensible terrorists who murdered Rina Shnerb​."

“The long arm of Israel reaches all those who seek our lives, and it will continue to do so,” he said.