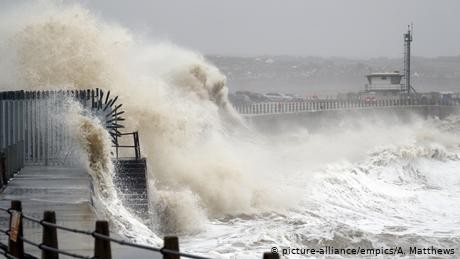 Northern Europe is currently being hit by a major storm, which is moving south. Known either as Ciara or Sabine in Germany, travel services and public events have been the first casualties in the powerful storm.

Germany has issued its second-highest storm warning level for large parts of the country. In parts of the Black Forest the highest level 4 warning has been issued. The weather system was forecast to travel south throughout the night.

Wind speeds of 120 kilometers-per-hour (75 mph) were expected in Germany, likely to fell trees and impair traffic. By 3pm, wind speeds had topped 140 kph in the Harz Mountains in central Germany. In Kiel, winds were at at 120 kph.

Airports in Frankfurt, Hamburg, Berlin, Cologne, Dusseldorf, Hannover and Bremen all said they expected operations to be affected. Cologne-Bonn airport said flight cancellations would start in the afternoon. About 100 flight departures and arrivals have already been canceled at Frankfurt Airport, though 1,100 were scheduled to go ahead with delays expected. Airlines are deciding for themselves whether to proceed. About 80 take-offs and landings have already been canceled at Munich Airport.

National rail operator Deutsche Bahn said it would cancel long-distance trains to hard-hit areas such as coastal regions from midday onwards. Cities affected include Emden and Norddeich in the north-west, the northern city of Kiel and the North Sea island of Sylt. By early afternoon, regional train services in Lower Saxony were heavily affected. Mobile teams with chainsaws were on standby to clear tracks and overhead lines. People who want to cancel journeys will be issued full refunds, Deutsche Bahn said.

A sold-out Bundesliga match between Borussia Moenchengladbach and Cologne has been canceled in the western city of Cologne. The Ski Jumping World Cup in Willingen (Hesse) had already been canceled on Saturday.

The UK Met Office said it expected flooding to buildings and roads, flying debris and strong waves in coastal areas. It has already issued at least 22 emergency flood warnings and 149 flood watch alerts.

Dozens of flights were canceled and rail companies operated reduced timetables. British Airways has offered passengers to rebook their flights.

The national rail company has advised passengers not to travel by train for the time being. Several ferry services have been halted, including several Dover-Calais connections.

In Scotland, three people were reportedly injured when a pub roof collapsed.

Belgium was expected to be affected for about 24 hours from 10 a.m. local time, with wind speeds of about 110 kph (68 mph). About 60 flights were cancelled at Brussels airport, including flights from Lufthansa and Eurowings.

Authorities have warned of flooding and storm damage. The north and north-west regions will be strongest-hit by gusts. In the Vosges mountains, wind speeds of up to 140 kph (87 mph) were expected. Authorities warned against going into forests and parking cars under trees.

Winds of 100 kph (62 mph) were recorded just after midday in the Netherlands, expected to pick up to 140 kph later.

Dutch people have been told to leave their infamous caravans at home, while the national football association has canceled all games in its professional leagues for Sunday. KLM has grounded dozens of European flights to and from Amsterdam's Schiphol airport.

Ignoring the warnings, a group of extreme cyclists competed in the Dutch Headwind Cycling Championships, riding along an 8.5 kilometer (5.3-mile) course on the coast of Zeeland. The event is billed as a Dutch version of mountain cycling.

Coastal regions of Ireland were expecting flooding and an event in Galway for the European Capital of Culture 2020 was already canceled on Saturday evening.

About 10,000 homes were left without power due to flooding, according to broadcaster RTE.

Danish paper Jyllands Posten reported a woman and a child were washed into the North Sea from a pier in the country's north, but were soon rescued. Several traffic accidents were reported. Most of the country appears to have avoided the worst of the storm.

Norway's Meteorological Institute issued a yellow warning for the southern and eastern parts of the country until 10 p.m. Several ferry services to Sweden and Denmark have reportedly been stopped and several roads were closed. Strong winds prevented a Danish passenger boat from docking in Oslo.