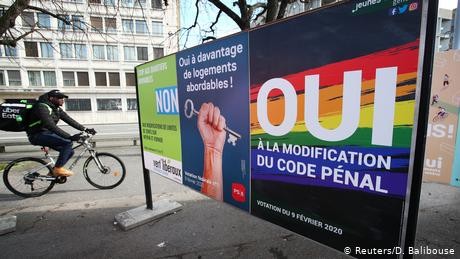 Switzerland was due to vote on Sunday on whether to ban discrimination based on sexual orientation.

Switzerland's referendum-based direct democracy takes many divisive issues to the populace if enough people demand it.

Sunday's referendum will decide on legislation that specifically outlaws hate speech and discrimination on the grounds of sexual orientation with jail terms of up to three years. The criminal code currently covers discrimination based on race, ethnicity and religion.

Polls showed that the vote should pass, with most parties backing the amendment to protect the gay, lesbian and bisexual community. However, the right-wing Swiss People's Party (SVP) — the strongest party in parliament — opposes the law.

The SVP argued that migrants have imported homophobic views and that social dialogue and expulsion of foreign perpetrators would be more effective.

The change was passed by Swiss parliament in 2018, but it was forced to a referendum after critics said it would stifle free speech.

What do the parties say about it?

SVP lawmaker Eric Bertinat told AFP news agency that he believed the law was "part of an LGBT plan to slowly move towards same-sex marriage and medically assisted reproduction" for gay couples.

Marc Frueh, head of the Federal Democratic Union of Switzerland (EDU), a small Christian party called it a "censorship law."

Socialist MP Mathias Reynard said he hopes to bring Switzerland in line with 18 other European jurisdictions on gay marriage.

"I hope one day we won't need all of this (protection)," Jehanne told Reuters news agency. "But I have the impression it won't be the case any time soon."

hat does the law cover?

It does not outlaw:

Every evening, DW's editors send out a selection of the day's hard news and quality feature journalism. Sign up to receive it directly here.