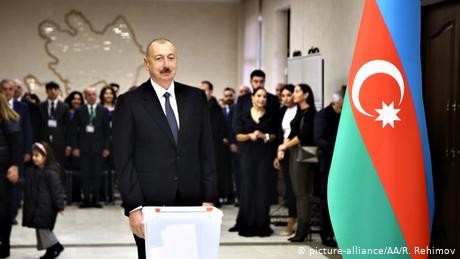 Polls opened in Azerbaijan on Sunday in snap legislative elections that are expected to strengthen long-term President Ilham Aliyev's hold on power.

Two months ago, Aliyev dissolved parliament, replacing his prime minister and several other officials, and moved elections up from November to February amid growing public discontent over an economic slowdown in the south Caucasus country of some nine million people.

Azerbaijan is highly dependent on energy exports, but a sustained drop in global energy prices has dealt a large blow to the country's economy and severely devalued its currency.

Read more: Opinion: Corruption charges have Council of Europe teetering on the brink of irrelevance

Opposition leaders and independent analysts have said the new elections allow the president to remove unpopular old elites under the guise of political reforms, while still retaining his party's hold on power.

The 58-year-old has governed Azerbaijan since 2003 following the death of his father, Soviet-era Communist leader and former KGB general Heydar Aliyev. His wife, Mehriban Aliyeva, serves as vice president.

Fundamental freedoms in the former Soviet republic are "severely limited", according to the Organization for Security and Cooperation in Europe (OSCE), who will oversee the election.

An OSCE report noted "systematic harassment and criminal prosecution of those who express critical views of the government."

Around 350 OSCE officials will take part in monitoring the election. Over five million people are registered to vote.

More than 1,300 candidates from 19 parties are in the running for a place in the 125-seat, single-house parliament. Aliyev's Yeni (New) Azerbaijan party, who previously held a parliamentary majority, is expected to face little challenge this time around.