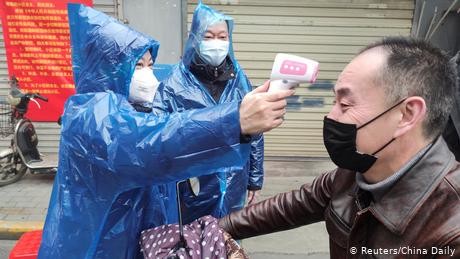 In China, the number of fatalities claimed by the coronavirus is rising continuously. More and more people get infected on a daily basis in the city of Wuhan where the virus first broke out. A new 1,000-bed hospital, built by the government from scratch within ten days, is now operational. A second, 1,500-bed hospital will follow soon. At the same time, doctors and paramedics are reaching their psysical limits and running out of protective face masks and other medical equipment. China is a country in a state of emergency: people quarantined, schools and universities closed. China now needs international support and solidarity.

Instead, here in the US and elsewhere we see the opposite: racist slurs targeting people of eastern Asian complexion are on the rise, both on Social Media and out in the streets. Twitter statements of that kind are also reaching the president of the US, Donald Trump, whose uninhibited and disdainful speech against people of color and women encourages many of his supporters to join him in stirring up sordid resentment against others, publicly and unashamedly.

On the subway here in New York City, I recently overheard a passenger explaining to his female companion that "the Chinese eat rats" and that this was the only reason why they were afflicted by the virus. This was then "topped" with a reference to people in Africa who, according to that passenger, had similar habits.

Read more: From bats to pangolins, how do viruses reach us?

Esteem only based on market value?

In times of economic and political confrontation with the People's Republic of China it is therefore all the more required to remind everyone that we are talking about fellow human beings who are plagued by a serious epidemic. These days, the people of Wuhan deserve our human compassion. When we invoke international regulations China must adhere to, do we really only refer to rule-based trade? Is our esteem of China only based on the value of its markets where we can sell our goods, and that's the end of it? We are touting our Western values so frequently — is empathy not one of them?

Or do we want to give the people of China a taste of the same medicine used by the communist rulers to torment both its own people and the neighboring countries? The People's Republic bullies its neighbor Taiwan and blocks its access to the World Health Organization although people on the island were contaminated by Wuhan travellers? A whistleblower from the People's Republic has leaked hundreds of pages to The New York Times which reveal that President Xi and his ruling elite are calling for "absolutely no mercy" toward the people in Xinjiang.

In China's northwestern province, up to one million people of the mostly Muslim ethnic Uighur minority are detained in "re-education" camps with the aim of dissuading them from their culture and religion. Do we want to show the same lack of compassion the Chinese leadership exhibits toward the Uighur? Or do we want to show genuine and deeply human empathy towards the people who are dying in Wuhan?

I hope we will achieve the latter. It has become increasingly difficult to call for solidarity with the people of China at a time when supporters of right-wing populist parties and movements gather on market squares in Germany, chanting slogans in which they express their hope that as many refugees as possible will drown in the Mediterranean. In many parts of the world, ethical chauvinism has become acceptable again. Societies afflicted by that virus are running the risk of becoming sedated, paralyzed and unable to take action. It is now up to those who don't share that sinister world view to promote solidarity with Wuhan and the people of China.

Alexander Görlach is a senior fellow with the Carnegie Council for Ethics in International Affairs and a senior research associate at the Cambridge Institute on Religion & International Studies. He has also held a number of scholarly and advisory positions at Harvard University. He holds doctorate degrees in comparative religion and linguistics and is a guest columnist for several publications, including The New York Times, Swiss daily Neue Zürcher Zeitung and business magazine Wirtschaftswoche.