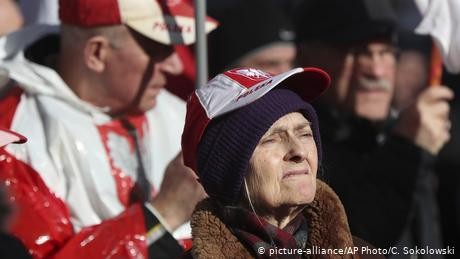 Several thousand Poles gathered in front of Warsaw's Constitutional Tribunal on Saturday, waving national flags and urging the government to complete its controversial overhaul of the court system.

Since coming to power in 2015, the ruling conservative Law and Justice Party (PiS) has passed a series of sweeping judicial changes, including rules for how judges are appointed. Legislation signed into law just this week

also makes it possible for the government to penalize judges whose actions or decisions they deem harmful.

The reforms have provoked sharp criticism from the European Union, which accuses PiS of trying to erode judicial independence and the rule of law.

"Let us support the government, so that the justice reform is completed," protest organizer Adam Borowski told the crowd at Saturday's march, adding that the EU "has no right to interfere."

"EU officials are abusing the law ... Our presence here is a defense of our sovereignty," he said.

PiS has described its overhaul as necessary to get rid of corrupt elements in the judicial system, but party critics say the reforms are just an attempt to muzzle judges.

The EU's top rule of law official, Vera Jourova, told German news magazine Der Spiegel on Saturday that the changes implemented thus far had been destructive. She also said the recently adopted bill on penalizing judges was "no longer a targeted intervention against a few black sheep," but rather a "bombardment."

PiS leader Jaroslaw Kaczynski defended his party's agenda, saying in a letter that PiS had a "strong mandate to act'' after winning elections in 2015 and 2019.

"There cannot be talk of a just Poland without a proper functioning of the justice system,'' Kaczynski said. "We will continue to reform the judicial system because that is what the republic needs."