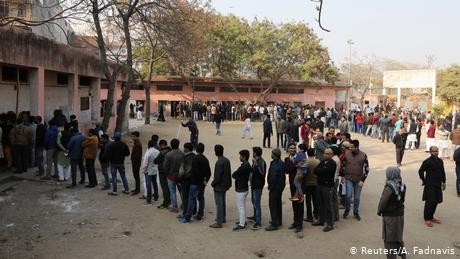 Voting in a crucial state election took place Saturday in India's capital where Prime Minister Narendra Modi's Hindu nationalist party, emboldened by national victories, is hoping to retake power after 22 years on the side line.

Long queues of voters waiting to cast their ballots could be seen across New Delhi neighborhoods on Saturday. Around 14.6 million people are registered to participate in the election, whose results will be declared on Tuesday.

What did Modi's party stand for?

Modi's BJP faced Kejriwal's party as their main opponent. Over the last five years in power, Kejriwal's party has focused on helping the state's poor by refurbishing public schools and providing bus fares for women and electric and healthcare subsidies.

The BJP's Federal Home Minister Amit Shah called a meeting for party members late on Saturday. He had campaigned vigorously for BJP, highlighting their tough stance on national security.

The BJP's campaign has aggravated Hindu-Muslim relations and positioned the election as a referendum on nearly two months of protests over a controversial new law that excludes Muslims from a fast-track to citizenship. The night before elections began, the BJP sent messages to constituents urging them to vote for the party if they want the rallies to end.

While these moves have proven favorable among BJP supporters, they have yet to make a difference at the polls. The party lost two state elections last year. Surveys by news networks predict another victory for the Aam Aadmi Party in the 70-seat state assembly.

A distant third party, the Indian National Congress, is not expected to perform well.

Were Modi's party to win, it could further bolster the BJP's pro-Hindu agenda, while defeat would be another blow to his policies.

The BJP hasn't been in power in New Delhi since 1998, when the Congress Party came to power. The Aam Aadmi Party has governed the state since a landslide victory in 2015, where it captured 67 out of 70 seats, just a year after the BJP won national elections.