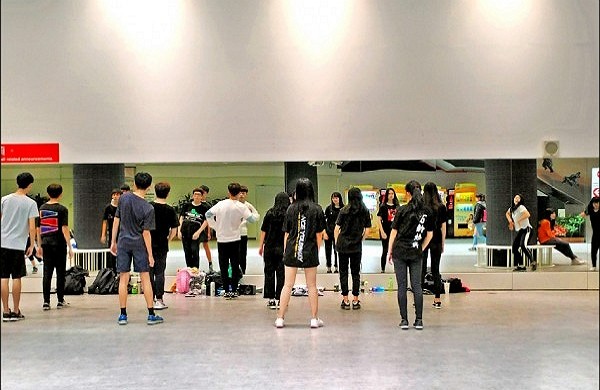 TAIPEI (Taiwan News) — As the Taiwanese government ramps up its defensive measures against the novel coronavirus (2019-nCoV) after the country's 17th confirmed case on Saturday (Feb. 8), the Ministry of Education (MOE) has called on student dancers to be more cautious about their health.

Student dancers in Taipei and New Taipei are known to hold practice sessions in Mass Rapid Transit (MRT) underpasses — in particular, those of Shuanglian, Ximen, and Banqiao stations. Since the announcement of the extension of winter break, hundreds of these students have chosen to spend their time busting moves in these underground areas each day.

The MOE has pointed out that most underpasses do not have high-quality airflow even when air conditioners are on, sparking concerns that assemblies of unmasked students could create clusters of viral transmission, which is what the postponed semester was meant to avoid in the first place. The MOE has therefore encouraged students to meet outdoors instead or, at the very, least wear masks during practice.

The Secretary of the New Taipei Department of Education, Ou Jen-Hao (歐人豪), said that the government was considering closing all the city's campuses but that it has decided to keep the basketball courts and tracks open to nearby communities. He said that people should avoid being in MRT stations for long periods of time to prevent the accumulation of large crowds.

Xu Yu-fen (許玉芬), division chief of the New Taipei Department of Health, said that since Taiwan has yet to receive reports of transmission clusters, students will not be prohibited from practicing in the underpasses. However, she said citizens should wash their hands diligently and pay attention to their health condition, reported Liberty Times.