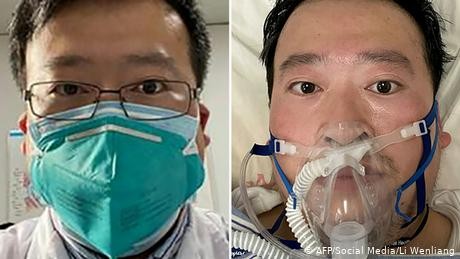 China pledged Friday to "thoroughly investigate" the death of a doctor who was among the first to sound the alarm about a new coronavirus outbreak.

Li Wenliang was reprimanded by authorities when he alerted colleagues in December to new investigations relating to a cluster of new viruses linked to a Wuhan animal market.

Li, a 34-year-old opthalmologist, died of the virus early on Friday morning, according to the hospital where he worked in Wuhan, the epicenter of the virus.

Li's death triggered an outpouring of grief on social media in China, with the users hailing him as hero for his efforts to spread the word about the virus. He and several of his colleagues were detained by Chinese authorities before the outbreak was formally identified on December 31.

Now China will send investigators to Wuhan from the National Supervisory Commission, China's top anti-corruption body. They will examine the circumstances surrounding his death.

The death count for the new coronavirus has now surpassed severe acute respiratory syndrome (SARS), with over 34,000 infections and 717 deaths reported across China on Saturday, according to China's National Health Commission.

Li initially thought the disease was a resurgence of SARS, an illness that killed hundreds across China in 2002-3.

Read more: Coronavirus: From bats to pangolins, how do viruses reach us?

Abroad, more than 320 cases have been reported as of Friday, mostly in Asia. Germany has so far reported 14 cases, more than any other country in Europe. A Japanese cruise ship remains quarantined after 61 people aboard were diagnosed.

The US also offered $100 million (€91 million) to China and other countries to help fight the virus. Twelve cases have been reported in the US.