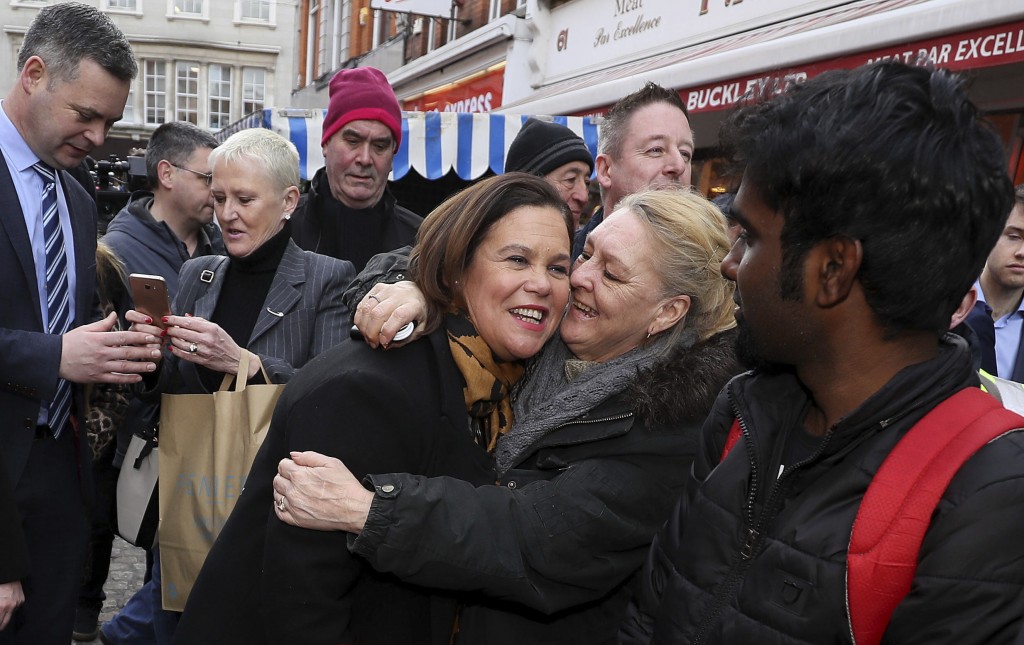 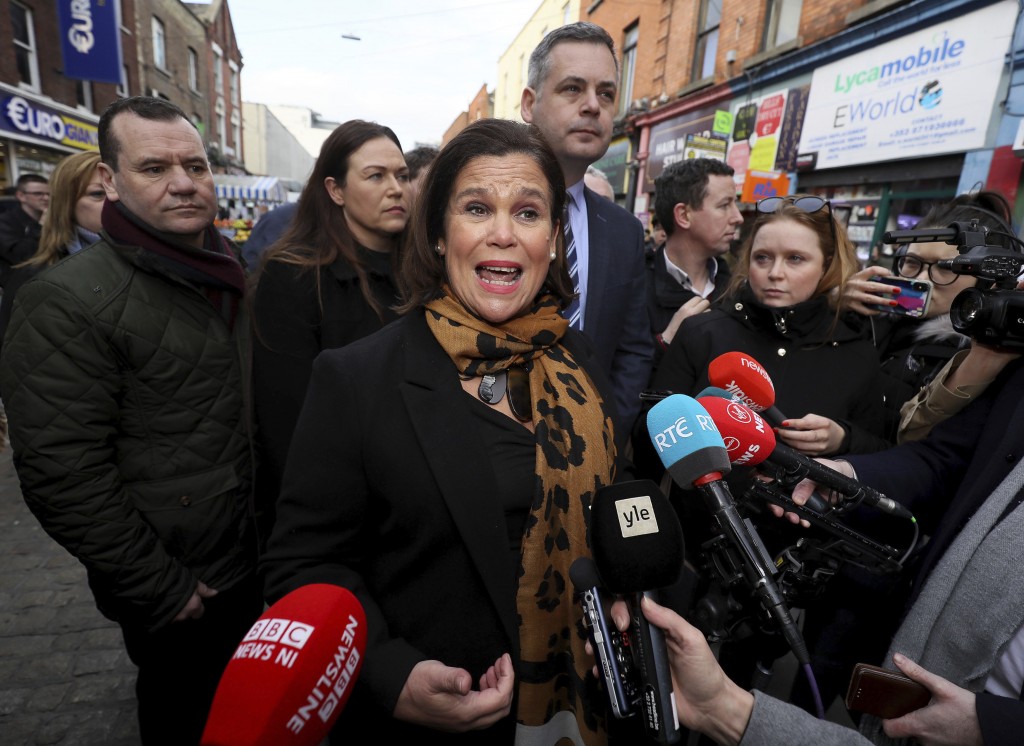 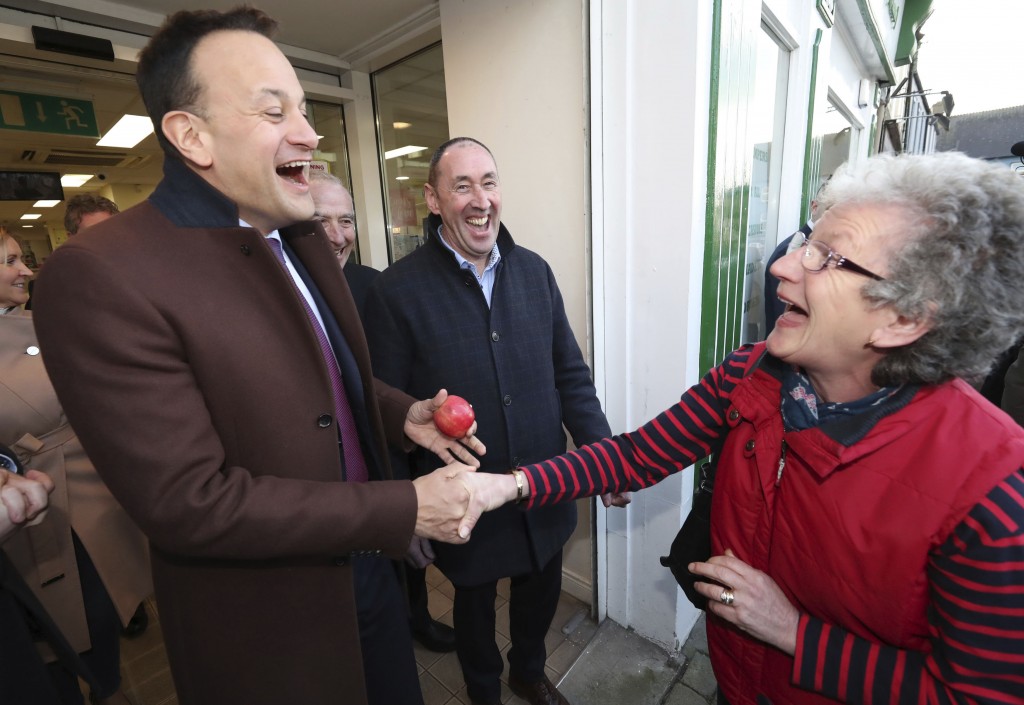 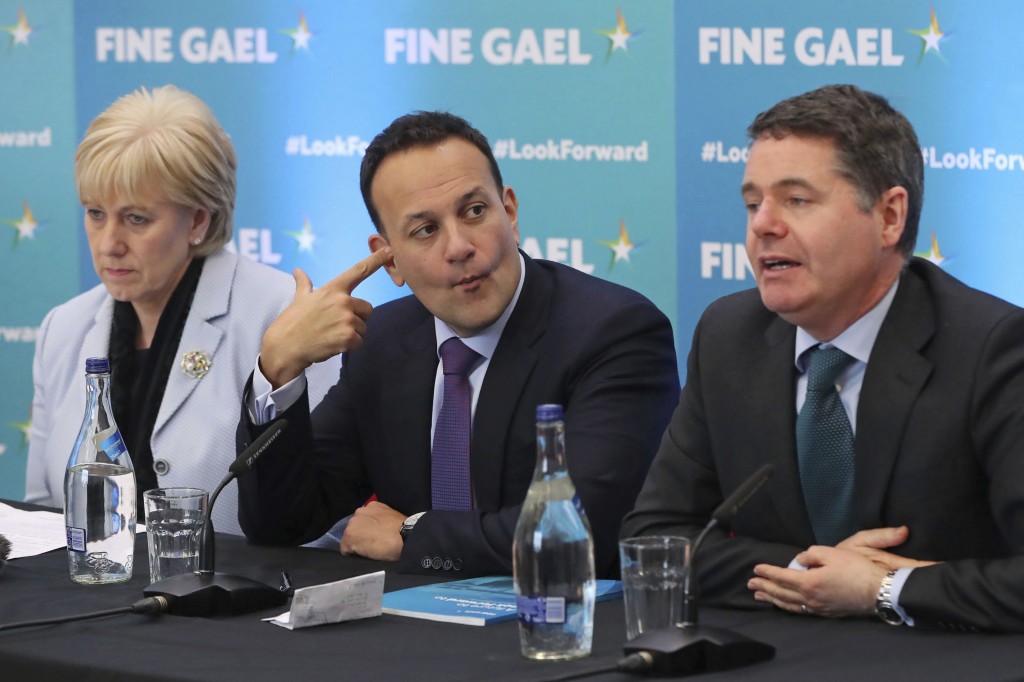 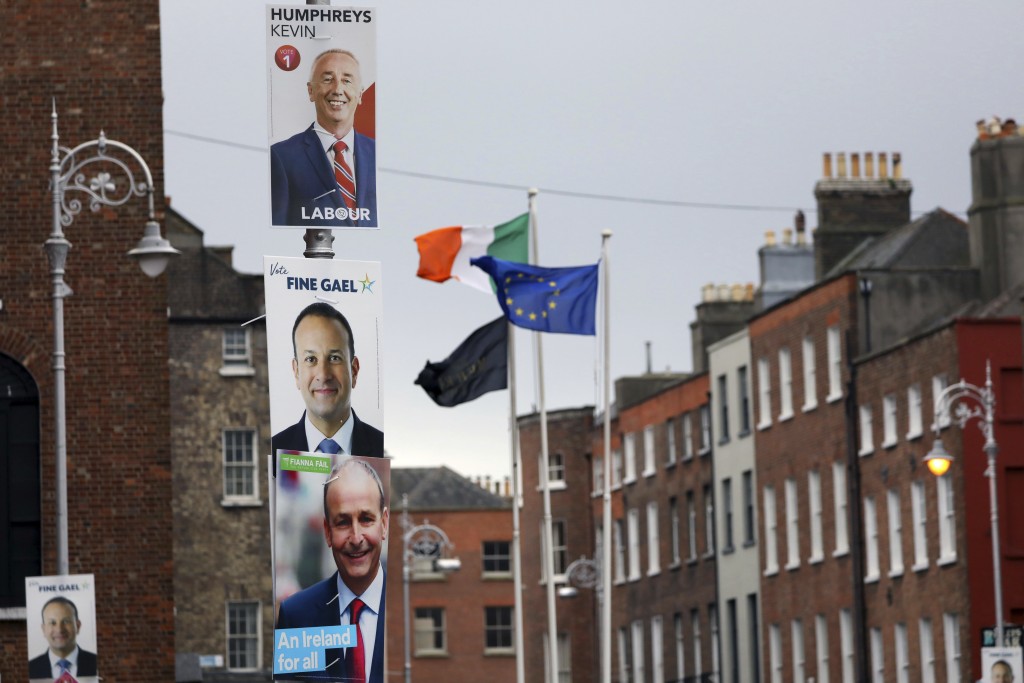 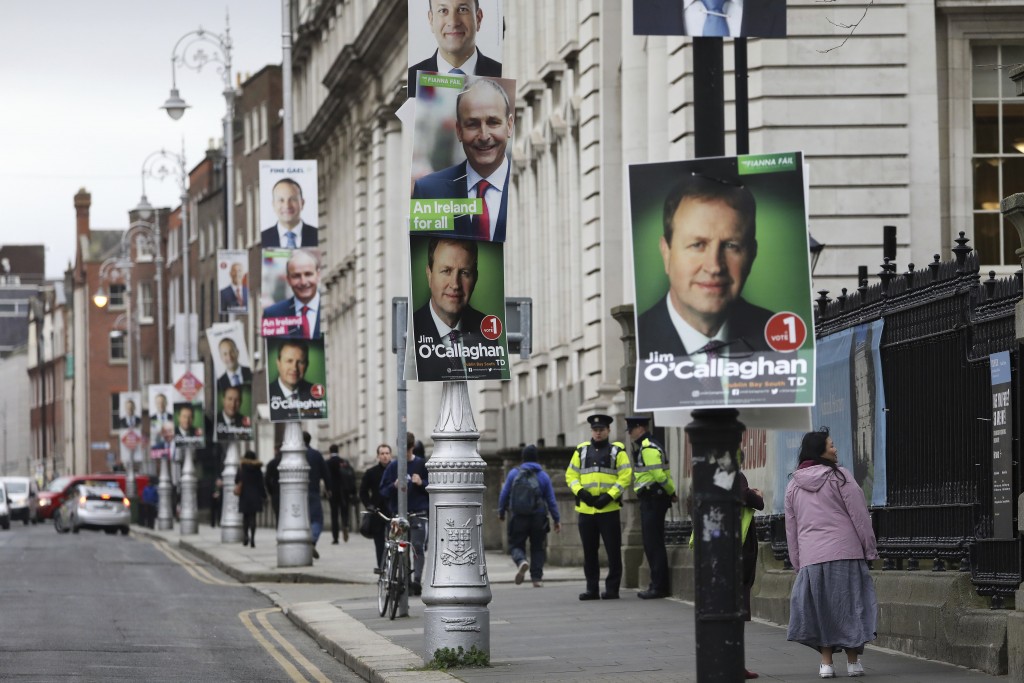 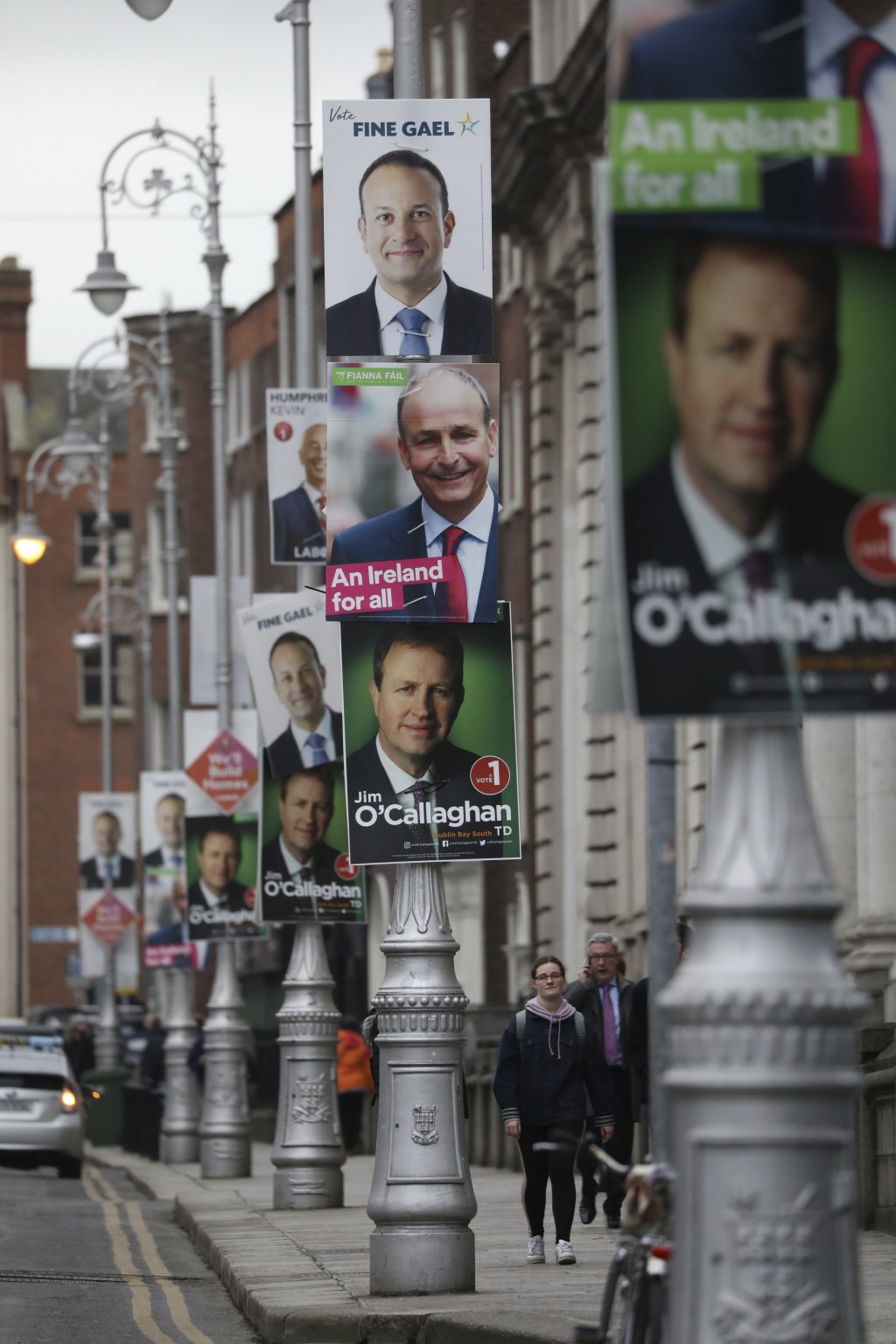 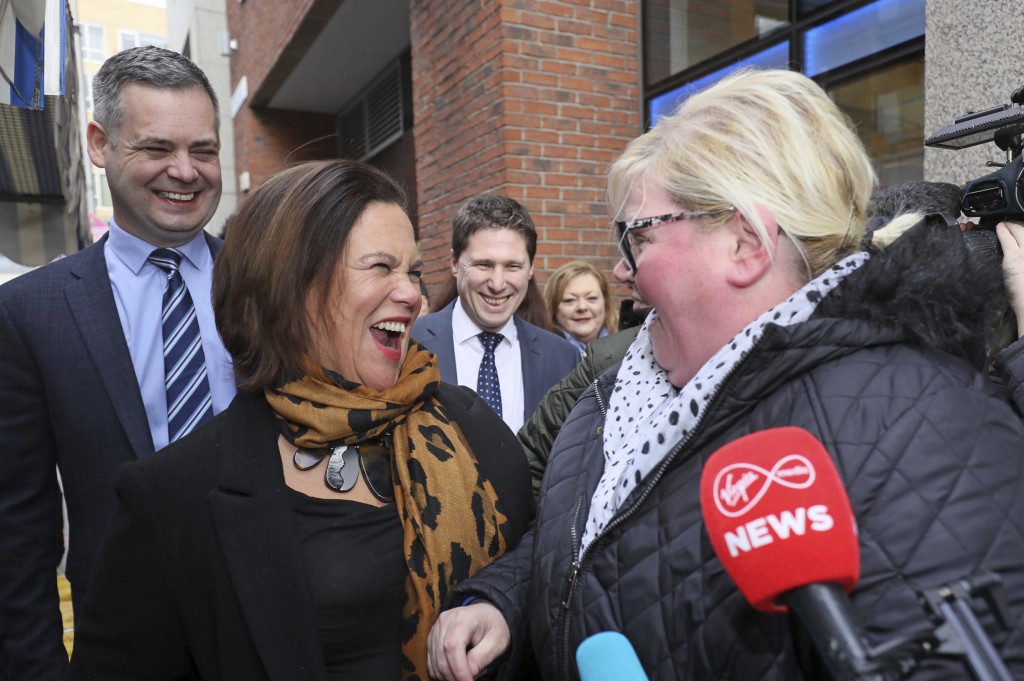 DUBLIN (AP) — Ireland's elections are usually two-horse races. But this time there's a third contender, as a party with historic links to the Irish Republican Army soars in the polls.

As Irish voters prepare to choose a new parliament on Saturday, a restive electorate is rattling the two parties that have dominated the country’s politics since it won independence from Britain a century ago, Fianna Fail and Fine Gael.

Polls show a surprise surge — maybe even a lead — for Sinn Fein, the party historically linked to the IRA and its violent struggle for a united Ireland.

Sinn Fein is a major force in Northern Ireland , which is part of the U.K., but has long been a minor political player in the Republic, shunned by the bigger parties because of its ties to the IRA. But the party’s left-wing proposals for tackling Ireland's housing crisis and creaking healthcare system are striking a chord, especially with young voters.

Sinn Fein President Mary Lou McDonald said this week that there was a “thirst for change” in Ireland.

“Fianna Fail and Fine Gael — essentially identical parties — have had it all their own way now for almost a century,” she said.

The two big parties, whose origins lie on opposing sides of Ireland’s 1920s civil war, are fierce rivals but share a broadly center-right outlook. For decades power has alternated between them.

Ireland's next Taoiseach, or prime minister, is highly likely to be either current Prime Minister Leo Varadkar of Fine Gael or Fianna Fail leader Micheal Martin.

But support for the two parties has fallen since the 2008 global financial crisis, which hit the debt-fueled "Celtic Tiger” economy particularly hard. Ireland was pushed to the brink of bankruptcy and forced to seek a humiliating international bailout that was followed by years of austerity.

The last election, four years ago saw voters shift in big numbers to protest parties and independents. It produced a Fine Gael minority government propped up by Fianna Fail votes.

Varadkar took office after becoming Fine Gael leader in 2017. The son of an Indian doctor and an Irish nurse, he was Ireland’s youngest-ever Taoiseach and its first openly gay leader. For many, he was the face of a confident, modern Ireland that has loosened the grip of the Roman Catholic church, legalized abortion and same-sex marriage, revitalized a long-stagnant economy and built up a thriving high-tech sector.

Internationally, Varadkar was the face of Ireland during Britain’s lengthy divorce negotiations with the European Union. The outcome of those talks was crucial to Ireland, the only EU country to share a land border with the U.K.

Most people think Varadkar and his party handled Brexit well, securing guarantees that people and goods will continue to flow freely between Ireland and the north. But that’s unlikely to bring him an electoral reward. Polls suggest Fine Gael is trailing both Sinn Fein and Fianna Fail, though the margins are narrow.

Jonathan Evershed, a postdoctoral researcher in government and politics at University College Cork, said Varadkar wasn’t getting much credit for his leadership on Brexit because Britain’s exit from the now 27-nation bloc, which became official on Jan. 31, is widely seen as “mission accomplished — there will be no hard border on the island of Ireland.”

That has left an election dominated by domestic problems, especially a growing homelessness crisis, house prices that have risen faster than incomes and a public health system that hasn't kept up with demand.

Both Fine Gael and Fianna Fail say they will build more houses, ease hospital overcrowding and cut waiting times for medical treatment. But their proposals look like tinkering compared to Sinn Fein’s more radical — and costly — plans to raise taxes on the wealthy, freeze rents, build tens of thousands of new homes and lower the state pension age.

The big parties say Sinn Fein’s socialist plans would hurt businesses and hit economic growth. And they have tried to remind voters of the party’s ties to past violence.

Sinn Fein’s links with the IRA, which disarmed after Northern Ireland’s 1998 peace accord, became an issue late in the election, when the mother of a Northern Ireland man who was beaten to death in 2007 — a killing the family blames on the IRA — accused party members of slandering her son as a criminal and failing to reveal what they knew about his death.

Sinn Fein denied Irish republicans were involved in the killing, but the party was put on the defensive. McDonald — a capable, 50-year-old Dubliner who has helped the party shed its hard-line Troubles-era image — condemned the murder as "barbaric."

Sinn Fein’s struggle for a united Ireland has been on the back burner during the election, but it is calling for a referendum on Northern Ireland rejoining the south within five years. That’s not something an Irish government could deliver without the support of Britain and Northern Ireland — highly unlikely in the short term.

But Brexit looks likely to nudge Northern Ireland’s economy closer to that of its southern neighbor, and could yet increase pressure for a poll on unification.

Under Ireland’s proportional representation system, no party is likely to get the 80 seats they need for a majority in the 160-seat Dail, parliament’s lower house, so some form of coalition government is likely.

Sinn Fein is running only 42 candidates, too few to win outright, but could hold the balance of power. Fianna Fail and Fine Gael both say they won’t form a coalition with Sinn Fein — but their resolve could be tested if the party does well.

Evershed said that, whatever the result, the election “has demonstrated the extent to which Sinn Fein has moved into the political mainstream.”

“They play the long game,” he said of the nationalist party. “If they don’t get into government this time, I think that they will view whatever happens as nonetheless a success, because it becomes a staging post for the next time.”

Varadkar, battling to keep his job, made a plea for voters to think before casting their ballots.

"Bear in mind that all change isn't change for the better,” Varadkar said Tuesday during a televised leaders’ debate. “We saw in Britain with Brexit, people voting for change and they got Brexit. We saw Donald Trump being elected in the U.S. — that's not the kind of change we want.”