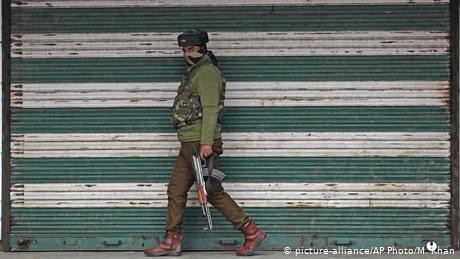 It was August 2, 2019, and Dar was detained under India's Public Safety Act (PSA). Authorities sent him to a jail in Agra city located in the northern state of Uttar Pradesh.

The family has been trying to secure Dar's release ever since.

"We met our father at the Kakpora police station fifteen days after his arrest. Later he was transferred to Srinagar's central jail, and then to Agra," said Dar's son, who works as an electrician.

"It is not just the struggle for my father's release, but also a matter of survival for my family. We can't cover the expenses for my sister's cardiac complications and my ailing mother without my father's financial support."

He added that that his father, a truck driver, had been booked under "false charges" of throwing stones at police and for associating with "separatist groups."

The next court hearing is scheduled for February 7, the 25-year-old son said.

The Indian government's abrogation of Kashmir's semi-autonomous status on August 5, 2019, was accompanied by massive security raids across the region to detain people accused of involvement in violent protests.

A senior Kashmiri police official told DW that "a majority of detainees have been released."

"All cases are periodically reviewed, as we consider a number of factors for their release," the official said.

Locals and separatist activists dispute the claim. According to the Jammu and Kashmir Coalition of Civil Society (JKCCS), a local human rights group, 662 Kashmiris were charged under the PSA last year, out of which 412 cases were registered after August 5.

February 5, 2020 marks six months since the Hindu nationalist Bharatiya Janata Party (BJP) revoked Kashmir's special status, and the families of those who have been arrested say they won't give up the fight.

Since the semi-autonomous status was lifted August 5, the region has been governed directly by Indian Prime Minister Narendra Modi's Hindu nationalist federal government in New Delhi. India-ruled Kashmir has also been placed under a strict communication blockade, which was only recently relaxed by the government.

New Delhi has now allowed access to only 300 approved websites via low-speed internet. The move has been condemned by many Kashmiris and Indian civil society groups, as they say that the region's economy has sufferedimmensely due to the internet shutdown.

A local traders' organization said in its report that there have been $2.5 billion (€2.27 billion) in losses over the past five months, adding that the internet blockade has also caused massive job losses.

"The situation has caused thousands of job losses, as financial institutions in Kashmir are unable to fulfill their commitments and risk bankruptcy. Many businesses have been shut down or are contemplating closure," according to the Kashmir Chamber of Commerce and Industry (KCCI).

Sheikh Ashiq, the KCCI head, told the DW that the restoration of 2G internet services by the government "is of no use to them."

"This internet speed is not going to help businesses. We need high-speed internet to run our business. We have conveyed this to the government," he said.

Rights activists say the measures taken by the BJP government in Kashmir are an attempt to "silence the Kashmiri people."

"The central government is dictating everything. In the absence of political activities, it is very hard to predict what is in store for the region," Siddiq Wahid, a Kashmiri political analyst, told DW.

"Silence is not equivalent to agreement. How are we going to express ourselves when we don't have an access to media?" Wahid said.

Sheikh Showkat Hussain, a Kashmiri academic, told the DW that the situation in the region continues to be "uncertain."

"Local media has also been curtailed and there is no communication from detained local politicians. This is creating a deep sense of alienation among the people," Hussain said.