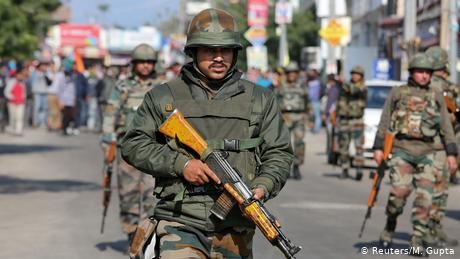 India has set an ambitious target of doubling its defense exports over the next five years, as a slowing economy has forced the country to cut down on imports.

The announcement, made by Indian Prime Minister Narendra Modi at a defense fair on Wednesday, is part of New Delhi's "Make in India" initiative.

Modi said the country was already manufacturing artillery guns, aircraft carriers and submarines, and that India's share in global defence exports had increased.

"Now our aim is to increase defense exports to 5 billion dollars," Modi said at the Defence Expo in Lucknow, the capital city of the north Indian state of Uttar Pradesh.

"Those who know about defense and economy surely know that India is not just a market.," he said.

India is the world's second largest arms importers after Saudi Arabia, and it accounts for nearly 10 per cent of the global share, according to the Stockholm International Peace Research Institute. It previously held the number one spot, with Russia accounting for more than half of India's weapons imports. Israel and the United States are the other two major suppliers to New Delhi.

The Defence Expo is being attended by several big arms manufacturers from France, Russia, Israel, and the United States. More than 1,000 firms, including 172 foreign companies, are participating in the event, according to the Indian Defense Ministry.

Indian armed forces are undergoing a modernization plan after years of being saddled by outdated aircraft and warships. Last week, India's finance minister presented the federal budget, announcing a meager increase in the defense budget. The allocation of funds for the country's military has been described by experts as "grossly under-provisioned”.

Last February, Indian fighter jets carried out airstrikes inside Pakistan, which was followed by air battle between the two archrivals. India also seeks to boost its military capabilities to counter China in the region, particularly the Indian Ocean.