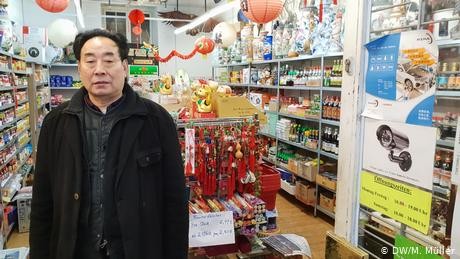 "I don't have time right now. Look how busy we are. Come back later," says a very stressed-out woman cooking at the takeaway restaurant of an Asian supermarket in Bonn. In a way, she answered the question anyhow: Are people avoiding Asian supermarkets and restaurants due to fears over coronavirus? The answer would seem to be no, at least not here.

The supermarket was the first of many Asian businesses our reporters visited on this day in Bonn, a city of 320,000 residents and located on the Rhine River in western Germany. Bonn is popular among Asian tourists. It is, after all, the hometown of famed German composer Ludwig von Beethoven, and one can visit the house where he was born.

Beethoven is one of the main reasons Asian tourists flock to the small riverside city. That interest is especially keen this year, as Bonn will host a number of special events marking his 250th birthday — a major draw for the tourists visiting.

Stories of discrimination against Asians since the coronavirus outbreak began can be seen on any number of social media sites. And hashtag campaigns have popped up in different languages on Twitter under the name #IAmNotAVirus. The stories document instances in which pedestrians have crossed the street to avoid Asians, how Asians are refused service at shops, or are verbally abused as "virus carriers." Another trend documented is the phenomenon of people avoiding Asian restaurants. So are these isolated cases, or is that what everyday life looks like in Germany right now?

The omnipresence of the coronavirus

One thing is immediately clear: Not only does the virus dominate the headlines, it is also an omnipresent topic in everyday life. When we stopped by a pharmacy in Bonn, one thing immediately caught our eye. It was a sign taped to the shop's cash register, reading: "It is not scientifically proven that wearing a face mask will provide significant protection against coronavirus."

Pharmacist Stephanie Maletz says masks with built-in filters are extremely popular these days — especially among foreign customers: "This morning some Chinese came in and wanted to buy 200 of them. Unfortunately, we only had 50, so they bought them all and left." She says they wanted to send the masks to family members back home. Now, the item, which costs €10 ($8.50), is sold out, though Maletz says she has thin doctors' masks that only cost 20 cents apiece.

'Fewer customers are coming in'

Phung Minh Hoang, from Vietnam, sits behind the cash register at a small Asian food shop near the central train station as he plays with this smartphone. At the moment, there isn't a customer in sight. Is it because of the coronavirus?

"I'd say the coronavirus has affected business. Fewer customers are coming in. But no one has actually said anything about the virus," he says. He tells us that sales have fallen over the past week — not by much, but still noticeably.

In nail salons, customers and manicurists sit very close to one another. In one such shop in the center of Bonn, a young Asian man is doing a customer's nails. He doesn't want to be recorded, nor does he want to give us his name. Nevertheless, he concedes that normally all of his colleagues would be working right now, but some customers are staying away — and his colleagues are forced to wait around. He says he isn't sure why that is. Asked if it has anything to do with the coronavirus, he says, "It might, but I'm not sure."

The situation was the same at an Asian restaurant we visited. An employee there, who also did not want to give his name, told us that fewer guests are dining at the establishment these days.

Anyone who has read this far might get the impression that the social media reports of Asians in Germany being avoided are true. But that is only half of the story. At a second nail salon, all three Asian employees are very busy giving manicures. They tell us business is normal. That is something we heard throughout the day at a number of Asian restaurants and shops.

When asked if business has been negatively impacted, Zhang Baoxiang, the owner of an Asian supermarket, says: "No. Everything is normal in Germany — Chinese, Germans — everything's normal. No different than before." Huang Fu Zhang, the owner of Ocean Paradise, a Chinese restaurant on a Chinese-style ship docked on the Rhine, concurs. The Shanghai-born restaurateur says he hasn't lost any business. He says everything is normal — well, almost everything.

He tells us, "Last night someone made a prank call. They said they wanted to come for dinner, but didn't want the virus. That really kind of annoyed me." He says he didn't appreciate the joke.

Georg Türk is a member of the China-Germany Friendship Association and the CEO of DeKang, a company that advises German companies operating in China. He tells us the virus has directly disrupted at least one aspect of his job — he was scheduled to host a group of Chinese visitors at the end of the month, but the group was forced to delay their travel plans.

Türk also mentions a birthday party he attended over the weekend. He says when people found out what he did for a living, they began asking questions about when he had last been to China, and if he was ill. He says the questions were half-joking, half-serious, and he told them, "don't get carried away." He says he has yet to hear about discrimination from any of his Chinese friends.

But not everyone has shared a similar experience. One woman employed at an Asian takeaway restaurant said that when her friends were at the drug store the other day, the cashier immediately reached for the disinfectant spray after they paid.