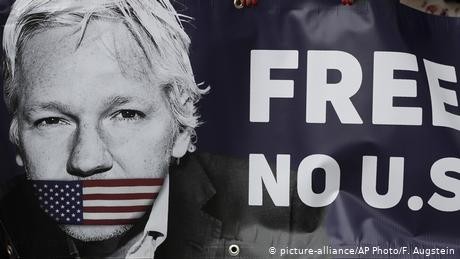 More than 130 prominent figures in Germany from the world of art, politics, and the media signed an appeal on Thursday calling for Wikileaks founder Julian Assange to be released from prison in the UK. He is currently serving a 50-week sentence for skipping bail.

It says that Assange, 48, is being held in "isolation and monitored under unnecessarily stressful conditions" in a British prison despite being in "critical health."

UN Special Rapporteur on torture, Nils Melzer, told DW that after meeting with Assange he believed that the activisted exhibited "typical signs of psychological torture."

They also argue that Assange risks being deprived of his basic human rights if he is extradited to the United States when his sentence is over.

Assange and the UK

Assange famously sought refuge in the Ecuadorian embassy in London in 2012 when Swedish authorities were seeking to bring him to Stockholm to face rape allegations. Authorities in Sweden have since dropped the case due to the difficulties in prosecuting it.

After increasingly frustrating the Ecuadorian government with his actions, his asylum was withdrawn and he was forced to leave the embassy in April 2019.

He is wanted in the US for violating the Espionage Act, where he faces a life sentence for leaking classified US military documents. The British government has not yet said if it will extradite Assange, although it had previously vowed not to do so if he faced the death penalty.