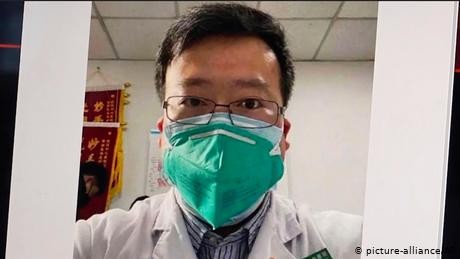 A whistle-blowing Chinese doctor who was among the first to identify the deadly new coronavirus died of the disease in Wuhan on Friday.

Li Wenliang was reprimanded by the police for "spreading rumors" about the coronavirus in December. He was among eight medical professionals who were accused of spreading "illegal and false information" about the virus.

Read more: How will the coronavirus affect the world economy?

The Wuhan hospital where Li was being treated announced his death at 2.58 a.m. on Friday morning after false information leaked that he died earlier in the evening. The World Health Organization tweeted condolences.

The virus has infected more than 28,200 people globally, with over 500 dead in China.

Died in his own hospital

Li, who was 34, had told a group of doctors on Chinese social media and messaging platform WeChat on December 30 that seven cases of a disease similar to Severe Acute Respiratory Syndrome (SARS) had been confirmed. They were linked to a seafood market in Wuhan, believed to be the source of the virus.

He was asked to sign a letter as a promise to stop spreading information about the virus.

Li wrote on social media that he had tested positive for the virus on February 1. He was treated in the hospital where he worked as an opthalmologist.

Rare expressions of outrage at the government could be seen online on Friday. Social media users called Li a hero and accused the government of incompetence and of mistreating Li and other whistleblowers.

"Wuhan indeed owes Li Wenliang an apology," said editor of the Global Times, a government-backed tabloid, Hu Xijin, on social media. "Wuhan and Hubei officials also owe a solemn apology to the people of Hubei and this country."