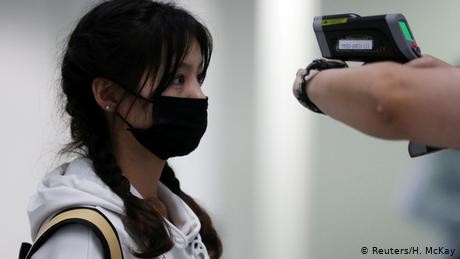 — The number of confirmed coronavirus deaths in mainland China has risen to 636, with the majority in central Hubei province, where the illness was first detected.

— One of the doctors who raised the alarm on the coronavirus died of the disease early on Friday morning.

— A 36-hour-old baby became the youngest person to be diagnosed with the infection.

— The new virus has infected more than 31,161 people globally, with new cases in Germany, the UK and Italy.

Below are Friday's latest developments.

11:44 Brazil's president Jair Bolsonaro signed quarantine orders into law for Brazilians due to arrive from Wuhan on Saturday. All arrivals will be quarantined at a military airbase for 18 days.

11:13 Hong Kong will use an army of volunteers to force arrivals from mainland China to submit to a 14-day quarantine. The new measure is designed to discourage all cross-border travel while still allowing deliveries of food and goods from China.

06:42 Organizers canceled one of the world's most prestigious art fairs, Art Basel Hong Kong, "due to the severe outbreak and spread of the new coronavirus."

"We have no other option but to cancel the fair," said Bernd Stadlwieser, chief executive officer of organizing MCH Group, adding that the decision "was an extremely difficult one."

The international art show typically draws up to 88,000 people from all over the world.

05:33 China's Central Commission for Discipline Inspection will launch an investigation into "issues" in connection with 34-year-old whistleblower doctor Dr. Li Wenliang, who died on Thursday after contracting the coronavirus from a patient he was treating. He was one of eight medical professionals in Wuhan who took Chinese social media platform Weibo to warn of the virus when the government did not.

04:30 Thirteen cases of coronavirus have now been reported in Germany. The German Foreign Ministry announced earlier they would repatriate any remaining citizens and their family members from Wuhan as soon as possible.

03:55 Chinese President Xi Jinping spoke with US President Donald Trump on the phone about coronavirus, according to Chinese state media. Xi told Trump that China was "fully confident and capable of defeating the epidemic", and that "the long-term trend of China's economic development for the better will not change."

"After considering various factors including guidelines from local and regional governments ... we've decided to continue our suspension of production at all Toyota plants in China until February 16," spokesman Aaron Fowles told AFP news agency. The economic impact of the coronavirus in China has been widely discussed.

Read more: How will the coronavirus affect the world economy?

01:30 More than two dozen trade fairs and industry conferences in Asia have been canceled in the wake of the coronavirus outbreak. In Hong Kong a major international art show has been canceled, officials announced. The city saw its first death this week and there are fears that the contagion will spread further.

01:20 A cruise ship off the coast of Japan has been quarantined, after 61 passengers were diagnosed with the virus. The Diamond Princess is moored in the Cruise Terminal in Yokohama.

At 86, Japan has the biggest number of cases outside mainland China.

01:00 The number of total confirmed infections in China from the coronavirus epidemic has climbed to 31,161, the government said on Friday.

The number grew after 3,143 new infections were reported, the National Health Commission said in its daily update.