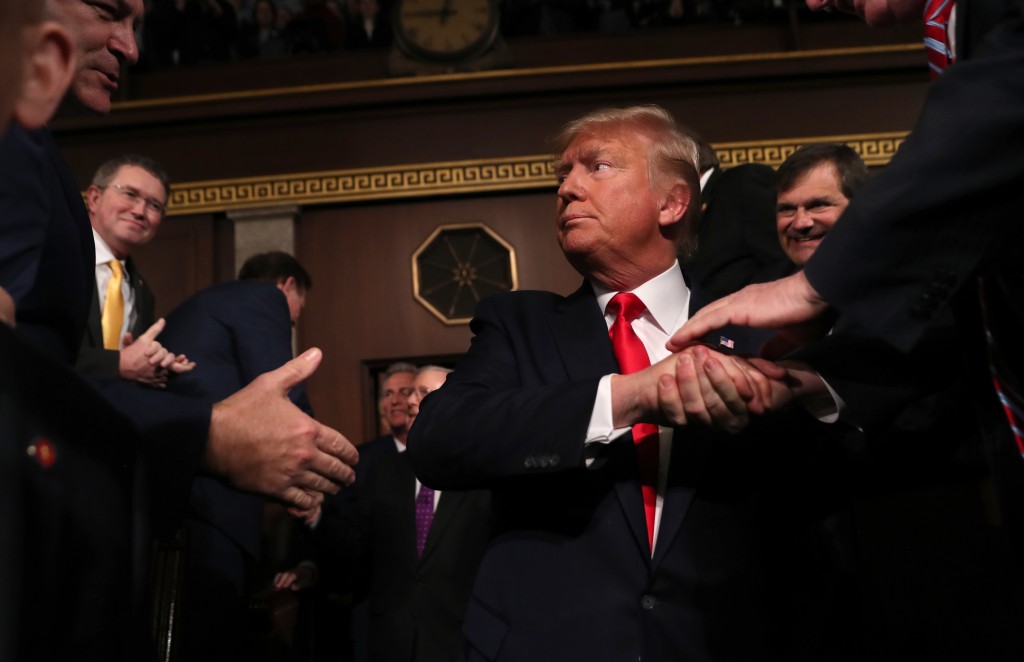 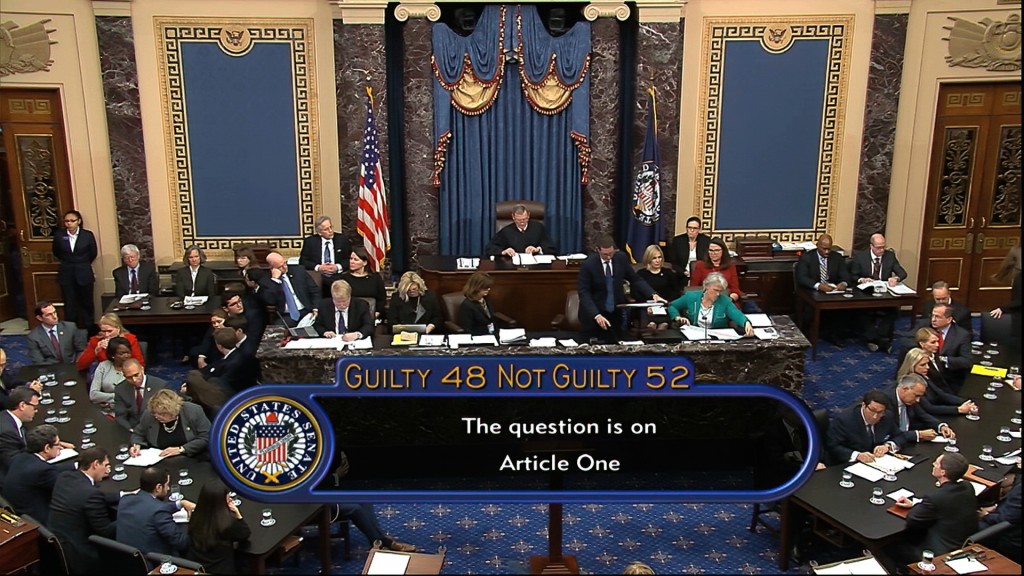 WASHINGTON (AP) — President Donald Trump won impeachment acquittal Wednesday in the U.S. Senate, bringing to a close only the third presidential trial in American history with votes that split the country, tested civic norms and fed the tumultuous 2020 race for the White House.

With Chief Justice John Roberts presiding, senators sworn to do “impartial justice” stood at their desks to state their votes for the roll call — “guilty” or “not guilty” — in a swift tally almost exclusively along party lines. Visitors, including the president’s allies, watched from the crowded gallery. Roberts read the declaration that Trump “be, and is hereby, acquitted of the charges.”

What started as Trump’s request for Ukraine to “do us a favor” spun into a far-reaching, 28,000-page report compiled by House investigators accusing an American president of engaging in shadow diplomacy that threatened U.S. foreign relations for personal, political gain as he pressured the ally to investigate Democratic rival Joe Biden ahead of the next election.

A politically emboldened Trump has eagerly predicted vindication, deploying the verdict as a political anthem in his reelection bid. The president claims he did nothing wrong, decrying the “witch hunt” and “hoax” as extensions of special counsel Robert Mueller’s probe into Russian 2016 campaign interference by those out to get him from the start of his presidency.

Trump’s political campaign tweeted videos, statements and a cartoon dance celebrating that he was “vindicated.” Trump himself tweeted that he would speak from the White House on Thursday about “our Country’s VICTORY on the Impeachment Hoax.”

The Senate Democratic leader Chuck Schumer said there will always be “a giant asterisk next to the president’s acquittal” because of the Senate’s quick trial and the Republicans’ rejection of witnesses.

A majority of senators expressed unease with Trump’s pressure campaign on Ukraine that resulted in the two articles of impeachment. But two-thirds “guilty” votes would have been needed to reach the Constitution’s bar of high crimes and misdemeanors to convict and remove Trump from office. The final tallies fell far short.

On the first article of impeachment, abuse of power, the vote was 52-48 favoring acquittal. The second, obstruction of Congress, also produced a not guilty verdict, 53-47.

Only one Republican, Mitt Romney of Utah, the party’s defeated 2012 presidential nominee, broke with the GOP.

Romney choked up as said drew on his faith and “oath before God” to announce he would vote guilty on the first charge, abuse of power. He voted to acquit on the second.

Both Bill Clinton in 1999 and Andrew Johnson in 1868 drew cross-party support when they were left in office after an impeachment trial. President Richard Nixon resigned rather than face revolt from his own party.

Ahead of voting, some of the most closely watched senators took to the Senate floor to tell their constituents, and the nation, what they had decided. The Senate chaplain opened the trial with daily prayers for the senators, including one Wednesday seeking “integrity.”

Influential GOP Sen. Lamar Alexander of Tennessee, who is retiring, worried that a guilty verdict would “pour gasoline on the fire” of the nation’s culture wars over Trump. He said the House proved its case but it just didn’t rise to the level of impeachment.

“It would rip the country apart,” Alexander said before his vote.

Other Republicans siding with Trump said it was time to end what McConnell called the “circus” and move on. Trump ally GOP Sen. Lindsey Graham said it was a “sham” designed to destroy a presidency.

Most Democrats, though, echoed the House managers’ warnings that Trump, if left unchecked, would continue to abuse the power of his office for personal political gain and try to “cheat” again ahead of the the 2020 election.

During the nearly three-week trial, House Democrats prosecuting the case argued that Trump abused power like no other president in history when he pressured Ukraine to investigate Biden and his son, Hunter Biden, ahead of the 2020 election.

They detailed an extraordinary shadow diplomacy run by Trump lawyer Rudy Giuliani that set off alarms at the highest levels of government. After Trump’s July 25 phone call with Ukraine, Trump temporarily halted U.S. aid to the struggling ally battling hostile Russia at its border. The money was eventually released in September as Congress intervened.

One key Democrat, Alabama Sen. Doug Jones — perhaps the most endangered politically for reelection in a state where Trump is popular — announced he would vote to convict. “Senators are elected to make tough choices,” Jones said

Questions from the Ukraine matter continue to swirl. House Democrats may yet summon former national security adviser John Bolton to testify about revelations from his forthcoming book that offer a fresh account of Trump’s actions. Other eyewitnesses and documents are almost sure to surface.

In closing arguments for the trial the lead prosecutor, Rep. Adam Schiff, D-Calif., appealed to senators’ sense of decency, that “right matters” and “truth matters” and that Trump “is not who you are.″

“The president’s basic lack of character, his willingness to cheat in the election - he’s not going to stop,” Schiff told The Associated Press on Wednesday, predicting more revelations would become public. “It’s not going to change, which means that we are going to have to remain eternally vigilant.”

Pelosi was initially reluctant to launch impeachment proceedings against Trump when she took control of the House after the 2018 election, dismissively telling more liberal voices that “he’s not worth it.″

Trump and his GOP allies in Congress argue that Democrats have been trying to undercut him from the start.

But a whistleblower complaint of his conversation with Ukraine President Volodymyr Zelenskiy set off alarms. The call had been placed the day after Mueller announced the findings of his Russia probe.

When Trump told Pelosi in September that the call was perfect, she was stunned. “Perfectly wrong,” she said. Days later, the speaker announced the formal impeachment inquiry.

The result was the quickest, most partisan impeachment in U.S. history, with no Republicans joining the House Democrats to vote for the charges, though one GOP congressman left the party and voted for impeachment and two Democrats joined Republicans to oppose. The Republican Senate kept up the pace with the fastest trial ever, and the first with no witnesses or deliberations.

Trump’s legal team with star attorney Alan Dershowitz made the sweeping, if stunning, assertion that even if the president engaged in the quid pro quo as described, it is not impeachable, because politicians often view their own political interest with the national interest.

McConnell, who commands a 53-47 Republican majority, braced for dissent, refusing efforts to prolong the trial with more witnesses, arguing the House should have done a better job.

Some GOP senators distanced themselves from Trump’s defense, and other Republicans brushed back calls from conservatives to disclose the name of the anonymous whistleblower. The Associated Press typically does not reveal the identity of whistleblowers.

Trump’s approval rating, which has generally languished in the mid- to low-40s, hit a new high of 49% in the latest Gallup polling, which was conducted as the Senate trial was drawing to a close. The poll found that 51% of the public views the Republican Party favorably, the first time the GOP’s number has exceeded 50% since 2005.