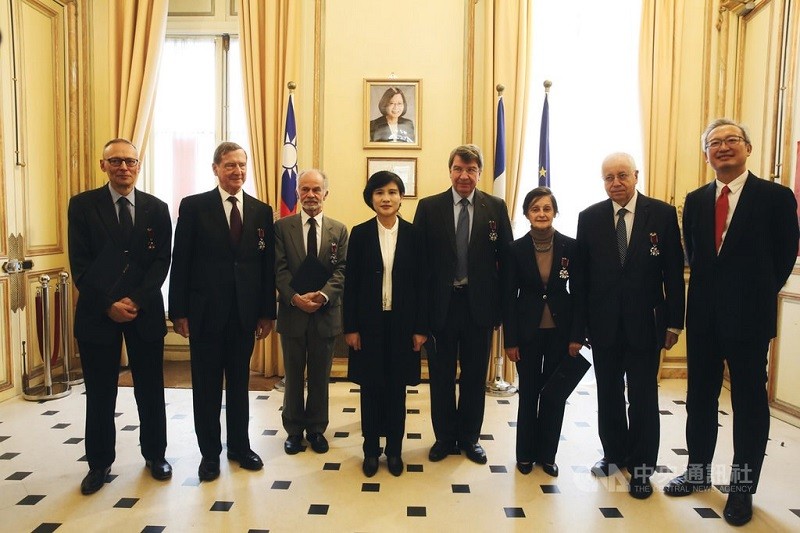 Six French academics from the Institut de France were honored by Taiwan with the first-ever cultural medal awards in Paris Monday for their contributions to promoting long-term cultural exchanges with the country.

The awardees included Xavier Darcos, the institute's chancellor, Perpetual Secretary of the Academy of Moral and Political Sciences Jean-Robert Pitte, as well as academy members Marianne Bastid-Bruguiere, Pierre Delvolvé, Daniel Andler, and Pierre Charau, who is a former secretary of the moral and political sciences academy.

The "Cultural Medal" was established this year by Taiwan's Ministry of Culture (MOC), and presented by Culture Minister Cheng Li-chiun (鄭麗君) at the Taipei Representative Office in Paris.

The medal recognizes individuals who have made significant contributions to cultural heritage, promotion, research, innovation and international exchange.

"Your contributions over the past few years have helped bridge the friendship between Taiwan, France and the rest of Europe,"Cheng said at the award ceremony.

Meanwhile, there was a special reason for holding the event in Paris this year, Cheng told CNA.

"Honoring the Institut de France with the first edition of the award has always been my greatest wish," she said, thanking the French institute for its long-term relationship with Taiwan.

"Taiwan's cultural development is definitely worthy of a place in the world," he said.

According to the MOC, this year's winners are also among the people who helped conceive the Taiwan-France Cultural Awards jointly set up by Taiwan's culture ministry and the Academy of Moral and Political Sciences under the Institut de France in 1996.